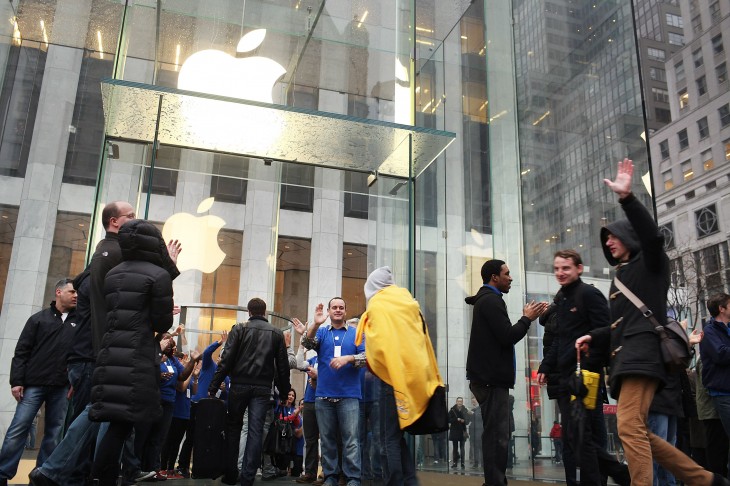 Less than a month after a US federal judge ruled that Apple conspired to raise prices on e-books, the US Department of Justice (DoJ) has proposed “a remedy” to address Apple’s price-fixing.

The DoJ has stipulated that Apple should terminate its agreements with the five implicated publishers, and their should be provision for a court-appointed external monitor. But perhaps most interestingly, the DoJ suggests that competitors such as Amazon and Barnes & Noble should be allowed to provide links from their e-book apps directly to their own digital bookstores.

As things stand, Apple’s rules prohibit apps from offering items for purchase that don’t give the company its 30% cut of sales, though Amazon is already tip-toeing around these restrictions by offering a ‘free sample’ search inside its Kindle iOS app. Once the free sample has been downloaded, the reader’s offered a ‘before you go’ screen that allows them to email themselves a purchase link for the book.

But Apple’s hand could now be forced into letting its e-book competitors compare Apple’s prices with the other market-dwellers.

“The court found that Apple’s illegal conduct deprived consumers of the benefits of e-book price competition and forced them to pay substantially higher prices,” said Bill Baer, Assistant Attorney General in charge of the Department of Justice’s Antitrust Division. “Under the department’s proposed order, Apple’s illegal conduct will cease and Apple and its senior executives will be prevented from conspiring to thwart competition in the future.”

Last year, we reported that the United States Department of Justice (DoJ) was going ahead with lawsuits against Apple and five major publishers – Hachette, HarperCollins, Macmillan, Simon & Schuster and Penguin – over alleged e-book price fixing. Essentially, the DoJ was investigating whether Apple’s deals with the publishers amounted to price-rigging, in the wake of the iPad’s launch back in 2010.

The recent news that Apple had been found guilty of conspiring to fix prices came less than two months after Penguin became the last publisher to settle the case, paying $75 million in the process.

This was the single biggest payout from the five publishers implicated in the case, and followed Simon & Schuster, Hachette Book Group and HarperCollins, which had previously agreed to settle for around the $70m mark, then MacMillan also agreed to pay $12m earlier this year.

The crux of the issue, according to the US Department of Justice (DoJ), was that Apple had conspired with the publishers in question to try and oust Amazon from its pole-position in the online e-book market, by ensuring books remained above Amazon’s typically lower prices. Essentially, it was about the publishers – not the retailer (e.g. Amazon) – being able to set prices. By having five of the six major publishers agree to this, this went a long way towards stifling competition.

In terms of the external monitor recommended today, well, the DoJ is asking the court to appoint a third-party to ensure “Apple’s internal antitrust compliance policies are sufficient to catch anti-competitive activities before they result in harm to consumers”.

It’s recommended that Apple would cover the costs of this appointment, who will ultimately work towards training Apple’s senior executives, as well as other employees, on antitrust laws.

The full proposal is outlined below:

The Department of Justice and 33 State Attorneys General today submitted to the court a proposed remedy to address Apple Inc.’s illegal conduct, following the July 10, 2013, U.S. District Court for the Southern District of New York decision finding that Apple conspired to fix the prices of e-books in the United States.  The proposed relief is intended to halt Apple’s anticompetitive conduct, restore lost competition and prevent a recurrence of the illegal activities.

“The court found that Apple’s illegal conduct deprived consumers of the benefits of e-book price competition and forced them to pay substantially higher prices,” said Bill Baer, Assistant Attorney General in charge of the Department of Justice’s Antitrust Division.  “Under the department’s proposed order, Apple’s illegal conduct will cease and Apple and its senior executives will be prevented from conspiring to thwart competition in the future.”

The department’s proposal, if approved by the court, will require Apple to terminate its existing agreements with the five major publishers with which it conspired – Hachette Book Group (USA), HarperCollins Publishers L.L.C., Holtzbrinck Publishers LLC, which does business as Macmillan, Penguin Group (USA) Inc. and Simon & Schuster Inc.  – and to refrain for five years from entering new e-book distribution contracts which would restrain Apple from competing on price.  Under the department’s proposed remedy, Apple will be prohibited from again serving as a conduit of information among the conspiring publishers or from retaliating against publishers for refusing to sell e-books on agency terms.  Apple will also be prohibited from entering into agreements with suppliers of e-books, music, movies, television shows or other content that are likely to increase the prices at which Apple’s competitor retailers may sell that content.  To reset competition to the conditions that existed before the conspiracy, Apple must also for two years allow other e-book retailers like Amazon and Barnes & Noble to provide links from their e-book apps to their e-bookstores, allowing consumers who purchase and read e-books on their iPads and iPhones easily to compare Apple’s prices with those of its competitors.

Additionally, the Department of Justice is asking the court to appoint an external monitor to ensure that Apple’s internal antitrust compliance policies are sufficient to catch anticompetitive activities before they result in harm to consumers.  The monitor, whose salary and expenses will be paid by Apple, will work with an internal antitrust compliance officer who will be hired by and report exclusively to the outside directors comprising Apple’s audit committee.   The antitrust compliance officer will be responsible for training Apple’s senior executives and other employees about the antitrust laws and ensuring that Apple abides by the relief ordered by the court.

On April 11, 2012, the department filed a civil antitrust lawsuit in the U.S. District Court for the Southern District of New York against Apple, Hachette, HarperCollins, Macmillan, Penguin and Simon & Schuster, for conspiring to end e-book retailers’ freedom to compete on price by taking control of pricing from e-book retailers and substantially increasing the prices that consumers paid for e-books.

At the same time that it filed the lawsuit, the department reached settlements with three of the publishers – Hachette, HarperCollins and Simon & Schuster. Those settlements were approved by the court in September 2012.  The department settled with Penguin on Dec. 18, 2012, and with Macmillan on Feb. 8, 2013.  The Penguin settlement was approved by the court in May 2013.  Final approval of the Macmillan settlement is pending before the court.  Under the settlements, each publisher was required to terminate agreements that prevented e-book retailers from lowering the prices at which they sell e-books to consumers and to allow for retail price competition in renegotiated e-book distribution agreements.

The department’s trial against Apple, which was overseen by Judge Denise Cote, began on June 3, 2013. The trial lasted for three weeks, with closing arguments taking place on June 20, 2013.  The court issued its opinion that Apple Inc. violated Section 1 of the Sherman Act on July 10, 2013.  The court will hold a hearing on remedies on Aug. 9, 2013.