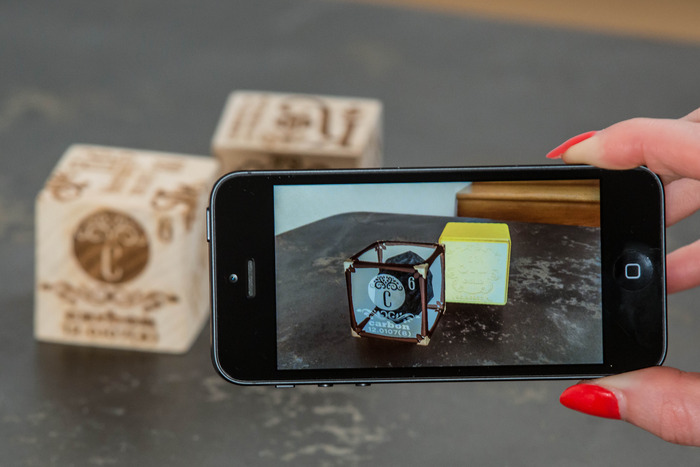 Augmented reality (AR) is a mixed bag. Early implementations have been gimmicky without adding much value to the experience, but when it’s done right, AR can be a wondrous experience.

DAQRI is taking strides to legitimize the medium by partnering with big-name brands like Maxim and Target, and the company is charting a next step to bring AR experiences to educational toys and games. The startup tipped its hand on Wednesday with the launch of a Kickstarter campaign for a set of Elements 4D blocks that enable users to interact with virtual versions of elements. I’ve played with the blocks, and they’re a clever educational tool. Combining various blocks shows the properties of chemical reactions and their respective compounds.

During a recent developer bootcamp, we sat down with DAQRI CEO Brian Mullins to learn more about how they’re driving the future of augmented reality.

From military to startup

Mullins got an early start in the augmented reality field in the 1990s by working with the Department of Transportation creating ship simulations for docking practice. His team worked on creating a massive virtual shipyard, hacking pairs of binoculars so they would work as mixed reality. He also worked on control systems and robotics at the Space and Naval Warfare Lab before venturing into the civilian sector.

When Apple released the iPhone 4, Mullins was inspired to start DAQRI after realizing that the device had sufficient computing power and a decent enough camera to create mixed reality experiences. DAQRI first set out to become the “YouTube of AR” with the idea of enabling creators to submit their own experiences.

Mullins, however, quickly realized that the market was still unfamiliar with the technology. The startup then decided to pivot and focus on creating the tools and platform needed to help creatives as they develop their AR solutions. The company now views itself as the Adobe of augmented reality because it offers tools for designing these experiences, instead of just a platform to share them.

One of the first big breaks for DAQRI, which recently raised $15 million to increase its engineering, design and sales teams, was signing a partnership with printer Quad/Graphics in 2011. Since then, the two have teamed up on over 1,000 AR campaigns for Quad/Graphics’ clients, which include Target, Maxim and Lego.

A self-professed movie lover, Mullins compares the current state of AR to the early days of film. One of the first moving pictures simply showed a close perspective of a train arriving at the station. Despite the fact that it was a gimmick, it impacted audiences. However, things really got interesting once filmmakers moved on to stories, such as The Great Train Robbery. AR creators need to evolve the platform to tell compelling stories instead of leaning too heavily on the technology itself, he said.

DAQRI’s platform for toys is called Enchantium and is set to arrive later this year. Mullins’ office is decorated with a combination of science fiction posters and the steampunk-influenced demos. One example, which the team built in-house, is a fascinating set of laser-etched woodblocks that turn into chemistry elements when viewed through the DAQRI app. Blocks can be combined to make different compounds, adding an interesting, and educational, layer of interactivity to them.

Enchantium is being built with support for EEG sensors that would measure electrical activity in the brain. Mullins showed off a tech demo where a bluetooth EEG headband measures the amount of focus directed at a lamp, which has been recognized on-screen by the DAQRI app, in order to turn the light on. Higher resolution EEG equipment even makes it possible for users to teach the system how to call up 3D images from a list of objects through pattern recognition. Current setups are unwieldy, but the possibilities here are fascinating.

“Our job as technologists is to reduce the friction between an idea and the manifestation,” Mullins told developers during a keynote at the bootcamp. “[We want] the minimum amount of invasiveness for the maximum amount of capabilities.”

Wearable computing, especially head-mounted displays, will open up another layer of potential for AR. DAQRI has committed to supporting Google Glass from day one, though the current placement of the headset’s screen makes it sub-optimal for augmented reality experiences because it can’t overlay an image the way a tablet or smartphone with a rear camera can.

When it’s done right, augmented reality feels like science fiction becoming reality, and Mullins is drawing on the genre for inspiration.

“[Science Fiction] blurs the lines between technology and reality, it’s magical. It does things you didn’t expect it to do.”

LA-based DAQRI’s proximity to the movie industry is also a good fit for Mullins. In his view, Southern California’s creative culture understands they’re creating a world when they’re putting it on screen, similar to what he’s trying to achieve with AR.

“For all intents and purposes to those people, what happens in that movie is real,” he said.

Put another way, Mullins views AR as the process of combining physical things with no inherent sensors with technology that does: “In a sense, you can make anything intelligent.”

The challenge of mobile

While AR has come a long way in the past couple of years, mobile technology still causes some degradation in the experience because of limited bandwidth, storage space and processor capabilities. Mullins admitted that there are “a lot of points of friction”, but he noted that creators can be inventive with using elements to entertain the user during the download process.

During the first year, DAQRI was working with files in the 1MB range. In the second year, those grew to 3-5MB and more recently, some publishers have been pushing downloads of up to 45-50MB. Meanwhile, publishers and developers are pushing the medium forward as they try to create new experiences.

“Our hypothesis when making tools for creatives was that they would make things that we never imagined. People are starting to understand the medium,” Mullins said.

It’s still an adjustment, though. Filmmakers and animators, for instance, have to suppress a tendency to control the camera angle, since AR gives users a 360-degree 3D view.

“That’s how they build tension and control the motion in a film,” Mullins said. “It doesn’t work in 4d. The strength in 4d is that the user controls the point of view.”

To illustrate his point, Mullins rolled out a poster on the ground and then showed off Anatomy 4D, which offers a remarkable view of the different systems within the human body. The app has been downloaded over 300,000 times, with average session times lasting eight minutes.

The move to make AR more playful with Enchantium makes sense. It was clear from chatting with Mullins that he and his team have fun with the work they do.

“It’s amazing, it’s our unfair advantage. We wake up everyday and we can’t wait to go have fun,” he said. “I don’t think it’s very often that a whole new medium gets created. We’re talking about putting information anywhere in the world in context.”

Mullins went on to compare augmented reality to pulling apart and changing the “substrate of the world.”

DAQRI may be pushing the boundaries of what’s possible with augmented reality, but the overall experience is still constrained because of the rudimentary level of the 3D graphics and the fact that you looking through a screen makes it hard to suspend belief. When I asked whether there are any “great reveals” in the near future that will push AR forward, Mullins was optimistic:

There are multiple moments on the horizon. When people see it as a gimmick, a simple demonstration of the technology that isn’t a valuable experience other than that, it’s still a wow factor…Every time we add more capabilities and reduce the difference between the virtual that’s represented in the world, we get more of that moment, more of that opportunity. I think that we’ll hit this threshold where there is a great reveal. It’s going to be when we get the tech and both the software and hardware to be forgotten about and get people to just think about the experience.

With multiple players in the space, the future of augmented reality is still up for grabs, but if DAQRI has its way, that future’s going to be a fun one.