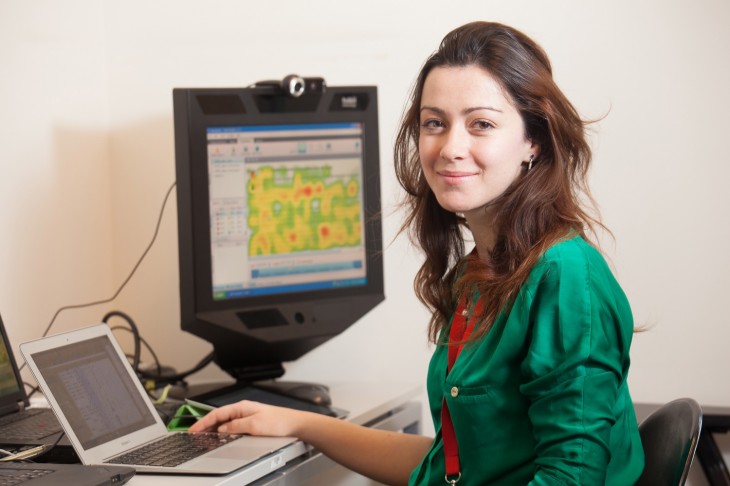 Spanish researcher Luz Rello has been unanimously awarded the European Young Researchers’ Award 2013 (EYRA), for which she was competing against fellow European PhD candidates across all disciplines.

While the award recognizes the level of her work and her personal qualities as a researcher, it also helps putting a valuable cause in the spotlight: Internet accessibility for dyslexics. This is the topic of Rello’s PhD thesis, DysWebxia, which she has been preparing for two years at Barcelona’s Universitat Pompeu Fabra (UPF) thanks to a scholarship from the government of Catalonia.

DysWebxia, or how to invent a dyslexia-friendly Web

As Rello noted in one of the papers she co-authored, dyslexia is a neurological reading disability that is characterized by difficulties with fluent word recognition, as well as poor spelling abilities. It is estimated to affect 10% of the population — and up to 17.5% in the US.

Regardless of the exact figures, there is no doubt that millions of Internet users could benefit from Rello’s PhD work. With DysWebxia, her goal is to measure how content and presentation alter online readability for dyslexics.

Besides its potential impact, one of the most interesting aspects of Rello’s research is that it occurs at the intersection between linguistics and computer science. As such, she based her experiments on tools borrowed from natural language processing (NLP) and human-computer interaction (HCI).

On one hand, she looked into how algorithms could be used to automatically replace words that are difficult for dyslexics with more common synonyms. On the other hand, she used eye tracking and facial expression analysis to find out what a dyslexia-friendly Web would look like.

While a handful of fonts are already made available as supposedly being dyslexia-friendly, this was the first time that HCI techniques were used to thoroughly test the impact of key interface design elements on a representative sample of people with dyslexia. The list of variables included in Rello’s experiment was very complete, ranging from character, line and paragraph spacing to font size and type, as well as column width, grey scales and color pairs.

Rello’s findings are summarized in an upcoming paper in which she details specific visual features that can make online reading much easier for dyslexics. For instance, she learned that the larger the font size, the better; ’18 pt’ seemed to be the optimal setting.

Moving on to font types, she concluded that italics tended to have a negative impact. Conversely, she observed that sans serif, monospaced and roman font styles significantly improved the reading performance. To name names, this means that Helvetica, Courier and Computer Modern Unicode are particularly good typefaces if you want to make sure your website is dyslexia-friendly  — which is likely to please Helvetica fans.

Turning a secret into a dream

While Rello couldn’t be more passionate about her PhD topic, the idea to focus her work on dyslexia initially came from Yahoo! Labs’ VP of Research for Europe and Latin America, Ricardo Baeza-Yates (see our previous post). A prominent computer scientist and a professor, Baeza-Yates was advising Rello during her masters’ thesis on NLP when he discovered what she calls “her biggest secret”: she, too, has dyslexia.

In a moving post on Daisy.org, she recalled how dyslexia tainted much of her childhood, up to the point where she thought she would never be able to finish school. Yet, she managed to overcome her learning difficulties in her teenage years. By her mid-twenties, she was an outstanding linguistics student and was never asked about her past:

“No one who knew me would have predicted that I had problems as a kid with all that academic success around me,” she wrote. “But [Ricardo] did. After some emails he noticed that there was something different with my writing. I had to confess for the first time in many years, and hence he proposed to me that I work with him on a PhD at Universitat Pompeu Fabra. I would use all my knowledge of linguistics and natural language processing to help people like me. He said: “There are very few people in the world more qualified than you to understand the real problems of people with dyslexia”. I gave up my plans and started my PhD. It was good advice, and Ricardo was right.”

In an email to TNW, Baeza-Yates explained that this topic was also closer to his own specialties, Web search and data analysis. Since he and Rello needed support on the NLP side as well, they then convinced fellow UPF professor Horacio Saggion to become Rello’s co-advisor.

Her passion for what she is doing is one of the main reasons why Baeza-Yates was keen to work with Rello — alongside the quality of her research and her impressive resume. Before the EYRA, she had already been granted several scholarships, including the Google Anita Borg Memorial Scholarship for young women in computer science.

In addition, she is grateful for the public funding she has received, and mentions this as one of the reasons why she wants to make her findings available for free. This applies to her current publications, but also to the algorithm that will likely result from her investigation on automatic word replacement. “My dream is to turn research into reality. What I enjoy is having a repercussion that can help people,” she told TNW.

In the case of DysWebxia, two apps are already fulfilling her dream (with several others under work). One of them is Text4all, a Romanian project that helps online users adapt existing Web pages to their needs. The other is the IDEAL Group Reader, the first e-book reader to include settings for dyslexics, which boasts over 11,000 downloads in Google Play. Created in India, it was one of the finalists at Vodafone Foundation Smart Accessibility Awards 2012.

Rello herself is using her research findings for a personal project called, which she developed on her free time with her friends Clara Bayarri and Azuki Gòrriz, respectively developer and designer at Cookie Cloud, which is the name that the trio chose for their team.

In its current form, Dyseggxia is a mobile game with word exercises to support English- and Spanish-speaking kids with dyslexia. It is available for free in the App Store as well as in beta for Android, and has already been downloaded over 7,000 times. The team is currently working on the next version, which is scheduled to launch at the end of July, and will include 2,000 exercises.

According to Rello, childhood is the best time to offer solutions to dyslexics, since adults like her have usually developed their own workarounds. To create Dyseggxia, she asked parents to send her pictures of texts written by their dyslexic kids. She then compiled these into a database to identify recurrent writing error patterns. After crossing this information with a list of the most frequent words in Spanish and a corpus of the words kids of a certain age are most likely to encounter, she manually created the exercises that are part of Dyseggxia.

In addition to being based on scientific theory, Dyseggxia has also been tested in the field thanks to a donation from US non-profit organization Apps4Android. After meeting with Rello, they gave away tablets that were used during testing sessions that she conducted in one of Barcelona’s centers for kids with learning disabilities. Since then, several of these centers have incorporated Dyseggxia into their syllabus.

Educational purpose aside, Dyseggxia is pretty entertaining, thanks to well-thought game mechanics, a colorful design and cute animations featuring its penguin mascot. While the app is still quite simple, the general feeling it gives is that it has personality.

From that perspective, it will be interesting to see whether Cookie Cloud will add new learning products to its portfolio. According to Rello, her friends and herself are keen to find funding to turn their side project into a startup. While this may be a loss for the academic world, one thing is for sure, adding development and design acumen to Rello’s scientific background and contagious vision is an interesting mix of talent.