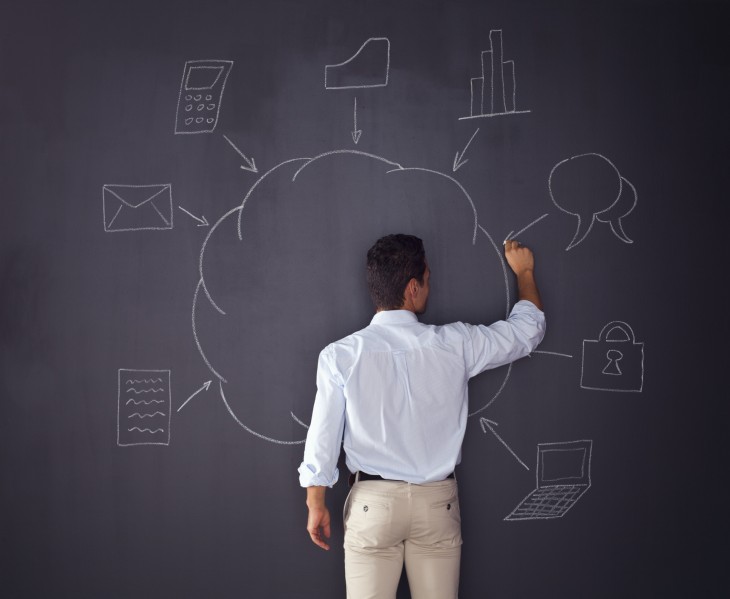 Let’s put a fork in it and call it done. “The Cloud” has now displaced “Social” as the web’s most widely-used and least-understood buzzword. Services like Dropbox, iCloud and Google Drive have become mainstream, and other specialized services like Evernote (note-taking), Wunderlist (to-do lists) and Pocket (news aggregator) are heavily used by consumers who don’t even know they’re using the cloud.

And while online backup and synchronization companies have been offering personal cloud for years, it took the hockey stick of smart phones and tablets growth to demonstrate – convincingly – its purpose and universal need. As consumers continue spending more of their time online through their many connected devices, the next piece of the connected experience is to consolidate and simplify the cloud itself.

The cloud is due for simplification, too. Each of the web’s major leaps forward follow roughly the same pattern:  1) New idea. 2) Profusion of vertical copycats and single-purpose solutions. 3) Elegant consolidation. The cloud is now at stage 3. Not only is the personal cloud replacing the hard drive as the focus of an individual’s web life, but it is also taking over where we keep our content and access services. According to a Forbes interview with Gartner, “the personal cloud will entail the unique collection of services, Web destinations and connectivity that will become the home of computing and communication activities.”

We’re beyond the early adopter stage and well into mainstream pick-up.

Gartner also predicts that personal cloud will become widely adopted by 2015, but that in 2014 less than 10 percent of consumers will use cloud services as their main storage. Among other things, this all ensures the next couple of years will see a critical shakeout of quality services that allow users to safely and seamlessly store, sync, stream and share using multiple connected devices such as smartphones, media tablets, TVs and PCs over the Internet.

The shakeout has just begun. But even now the current and growing issues brought on by the ubiquity of the cloud are clear: fragmentation, inefficiency and security risks are three concerns that should be top of mind for both consumers and service providers. Success in the personal cloud space will only be possible for those able to meet and solve these flaws and challenges.

Let’s spend a little time with stage No. 2 – fragmented, single purpose one-offs. The introduction of myriad cloud services has created a fragmentation of apps and programs that serve different purposes on different devices, assuredly doing one and only one thing (often not well). For example, Google Drive is used for documents, but Evernote for one-off notes, and Pocket as a content aggregator. In theory, these are all meant to help simplify and organize your everyday life.

We’re beyond the early adopter stage…

But many users are already experiencing the hassle of having to update a host of single-purpose apps on multiple devices, often deterring them from continuing to use the service. Practically speaking, using tons of single-purpose apps equates to an operating system “Tower of Babel,” creating conflicts and crash bugs that require almost constant updating.  The average smart phone user now has 67 apps. Is that progress? Almost a portion of a day has to be dedicated to ensuring everything in the cloud is streamlined. In the future personal-cloud world, we will see not an “app for everything” but a handful of applications that make your mobile, multi-device experience easier, richer and more secure.

In today’s web, first-rate service also means secure service. The mobile device is ground zero of the threat-center, particularly on Android devices. Attacks are on the rise, and cloud-based services are big targets. Making it worse, many developers don’t follow proper encryption protocols that safeguard messages and information from the bad guys. Every app has a different commitment to security – both in terms of level of protection and responsiveness to new, known attacks.

Software updates, new programs and apps help offset security risks, but this only comes with one more app to download to make your personal cloud useful and safe. These piecemeal solutions diminish the convenience that the personal cloud is meant to offer. Security risks aren’t going away anytime soon, but the personal cloud storage of tomorrow will offer a unified but distributed  solution that simplifies and increases your protection against security attacks.

Now, what about the ever-receding horizon of performance? Think about it: GBs of data are being moved from device to device over Internet connections of varying speed. In today’s personal cloud space, this is a problem.

…cloud services should be hosted on a single platform

One of the biggest issues is caused by the multiple apps and programs running on your computer, TV, tablet or phone that compete for bandwidth – and they’re not talking to each other!  To increase the speed of a given program, applications have to manually be shut down, and the introduction of more and more apps isn’t helping to meet the growing demand of a faster Internet experience. If it’s not already there, expect the next big app to be a personal load balancer.

This, in turn, creates another roadblock on the path to a fast and irritation-free personal cloud experience. To stay ahead of the game, the most vital personal cloud services should be hosted on a single-running program. Here, one can find your notes, documents, news, movies and music, where everything runs on a balanced, task-oriented basis and doesn’t drain the efficiency of a device.

The Power of the Browser

Let’s talk about the helpful older sibling of this equation – the one who’s dealt with these issues for longer than anyone can remember. The application that has something to offer here: the web browser. A lot of emphasis has been placed on myriad apps that solve problems, but one of the more important functionalities of our everyday Internet experience has often been overlooked. Today’s web browser is so much more than the relatively archaic (sorry Netscape) sender, receiver and renderer of http requests. It’s the natural operating system of the personal cloud. And the personal cloud  has reached a level of complexity to where it needs its own operating system.

Personal cloud storage within a browser isn’t a new idea. But the browser that successfully provides the service will deliver a streamlined, secure and efficient solution that will adapt to the changing needs of the consumer. It will eliminate the need for a million one-off apps. It will make your web surfing safer and secure. It will ensure speed. The coming years will prove to be a pivotal time in which consumers decide where they want to keep their personal cloud, and the browser is already forming the perfect frame that knits together all the needs of today’s and tomorrow’s consumer.

Read next: The Surface Pro at work: Can it be a full PC replacement?