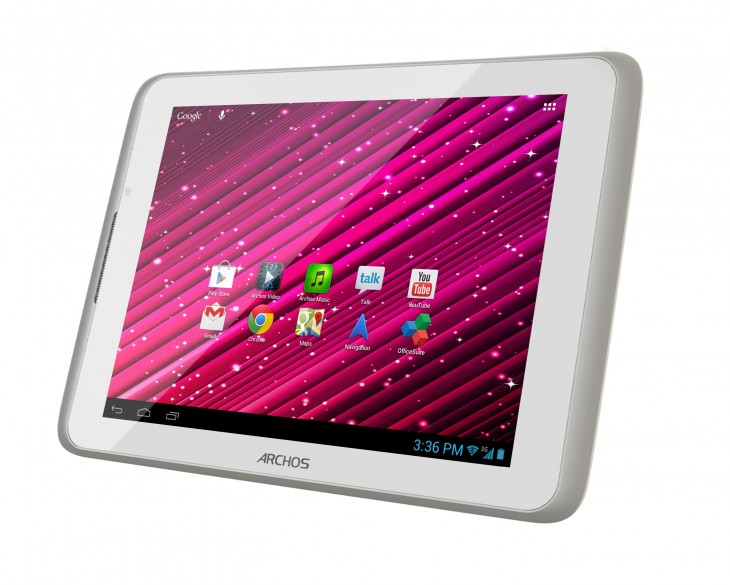 The tablet runs on Android version 4.1 (Jelly Bean) with 1GB of RAM and 4GB of internal storage, although it’s worth noting that there’s also a MicroSD slot for up to 64GB of additional space.

As mentioned, it offers an 8-inch IPS touchscreen at a display resolution of 1024×768. It’s not going to be the most detailed or bright screen on the market, but it should be acceptable in most lighting conditions.

There’s a 2-megapixel rear-facing camera for taking shots on the move, although a mock-up image given to us by Archos doesn’t show a counterpart on the front. So if you’re interested in jumping on Skype or Google Hangouts with the family, you might be better off looking elsewhere.

The device is 3G and WiFi-enabled, however, and will be available from June for £159.99 ($244.80 USD), putting it right in contention with the entry-level Nexus 7 and Kindle Fire tablets.

Interestingly, Archos describes the 80 Xenon tablet as an “Un-SIM-locked” device, which means that it can accept SIM cards from any operator. Archos hasn’t confirmed it, but that could mean voice calls similar to the Samsung Tab 3, which would make it an infinitely more compelling proposition.

Android enthusiasts will also be pleased to hear that the device runs stock Android; so while it might have a few custom apps running from the outset – the usual bloatware, in other words – there’s no irritating skin or custom animations to put up with. We’re looking at you, TouchWiz and HTC Sense.

Unlike some of Archos’ other entry-level tablets, the 80 Xenon also comes with a full suite of connectivity options, including Bluetooth 3.0, WiFi, a GPS transmitter and an FM radio.

From a technical standpoint, the Archos 80 Xenon is far from revolutionary. If you want to stay connected using as little money as possible, however, it might be worth a look. It also follows the Archos ChefPad, a peculiar 9.7-inch Android tablet built specifically for chefs and cooking enthusiasts.