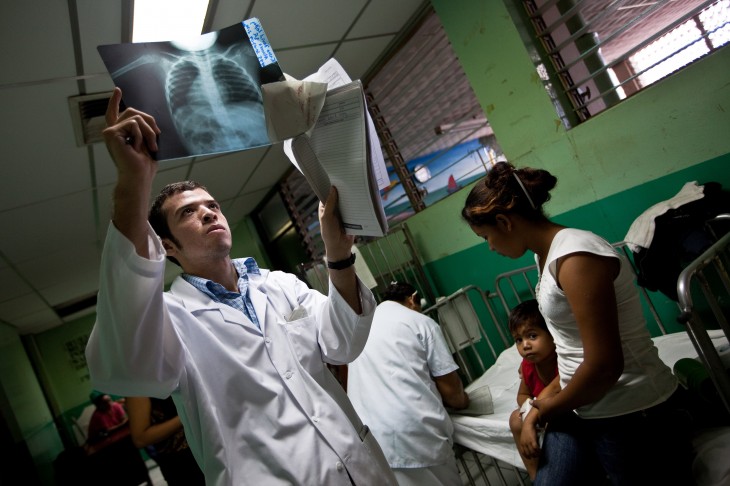 GuardIt, the product development company that creates portable notification systems and sensors, has teamed with Project HOPE to launch a new device that will help aid in diagnosing pneumonia. Called INSPIRE, this pediatric device is an electronic aid that is attached to children under five. It is also intended to be used in developing countries to help decrease the mortality rate of a disease that is the number one killer in the region.

Costing between $15 to $20 each, the INSPIRE device replaces the outdated method health workers are using in many areas. Currently, counting breath rates means having doctors and nurses counting and using a minute timer or even using beads, which is susceptible to errors and could cost a child the chance to receive necessary medicine.

The INSPIRE device works by using GuardIt’s proprietary technology to measure patterns of breath recognition using an algorithm that will analyze the data and display the results in a way anyone can understand. It’s composed of nonslip material making it capable of adhering to the body and remaining in place. The aid will test breath rate in 15 second intervals and can also conduct multiple tests within a single minute time frame.

Testing can be done on any child in any position, whether they are sitting or lying and is made to work in harsh environments. Along with a manually rechargeable battery, it can transmit data using Bluetooth, while also coming equipped with multiple other medical sensors to track temperature, heart pulse, telemetry, and other things.

GuardIt teamed with Project HOPE, a non-governmental organization (NGO) based in Virginia that focuses on global humanitarian missions centered around providing medical care in the developing world. Cary Kimble, Associate Vice President for Development for the NGO, says that the partnership helps to provide the best solution to the field for healthcare works to save the lives of children.

Both organizations entered into a strategic partnership in December 2009 following the tsunami that affected Southeast Asia. They created the Delivering the Breath of Life pilot project in the Aceh Barat District in Indonesia where GuardIt’s sensors were used to detect pneumonia. More than two years later, the two groups are at it again, but have produced a specialized device to aid in their mission to help end pneumonia.

According to Project HOPE, in 2011, 1.3 million children died from pneumonia and they didn’t have to — it’s a preventable and treatable illness. 99 percent of all its victims are from developing countries.

Photo credit: Brent Stirton/Getty Images For Save the Children

Read next: Source: Facebook not in discussions with Apple, Microsoft to port Home to their platforms [Update]