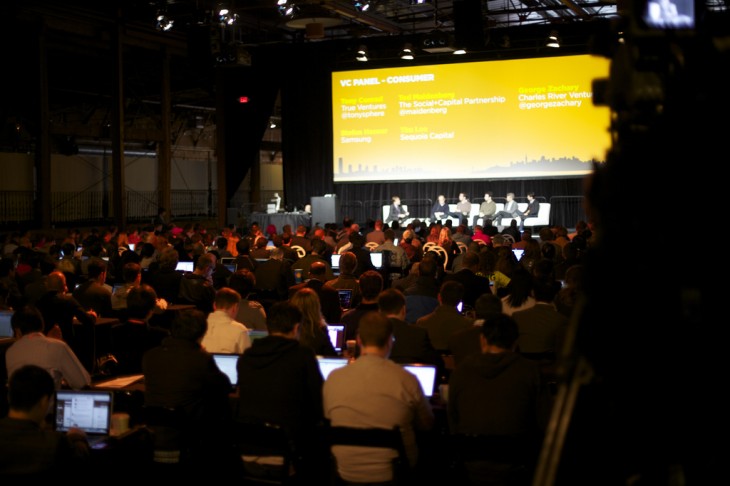 It’s the third and final day of the 2013 Launch Festival and things has been moving full steam as we approach the finish line. In just a few hours, event organizer Jason Calacanis and his Grand Jury will choose from among the 50+ companies that have presented on stage the winners. It’s only a matter of time until we find out who is following in the same footsteps of Yammer and RedBeacon.

Before the awards are doled out, there were over a dozen more companies that had to present and launch their business. Here are the remaining ones that stood out in our mind:

A online sticky note collaboration service, Stormboard says it solves the issue users have around photographing a whiteboard. The service allows anyone to capture, prioritize, collaborate, and export ideas in a digital manner hosted in the Cloud. The company claims that it takes one minute to learn and five to master.

The service is free for up to five users to collaborate through the use of sticky notes, but will cost between $5 and $50 per month per user. It currently has Fortune 50 companies among its growing customer base and says that it has around 500 paying users.

A mixture of NextDoor meets Path, this family-oriented iPhone app focuses on allowing parents to connect with others that they trust when it comes to babysitting, get-togethers, or any other type of assistance. Rather than going to Facebook where the data and use is not necessarily conducive to the needs of parents, Social Parent helps to ensure privacy and trust.

Everything in SocialParent is supposedly modeled after the actual way families interact and plan with the much-needed social and mobile twist. Some of the features include dashboard planning tools, local recommendations and alerts, photo streams, super-easy planning, and groups — for everything from a family’s “inner circle” (families you really want to interact with) to temporary groups (i.e. class that lasts for 9 months, basketball team that lasts for 3 months, etc.), and more.

A bit more financially-oriented than most companies that presented at the Launch Festival, eShares converts paper certificates for shareholders into digital versions. A company representative will go into the eShares website and issue new certificates to the prospective buyer. From there, the certificate will go to the company’s president and secretary for signature and verification. Once complete, the buyer can log into the eShares website to view their digital documentation and analyze how much it’s worth.

For those who run their own business, eShares also has the capability to manage options as well and assess what the cap table will be.

Created to help aid those people battling one of several addictions, Addicaid is a mobile service that essentially functions almost like the Yelp for treatment. It was started by an alcoholic and appears to be a useful way to locate twelve-step meetings. Users can query based on their location and by preferences, such as whether there are snacks, if the sessions are frequented by young people, and more.

So far it helps users find Narcotics Anonymous and, by launch, Alcoholics Anonymous meetings in their area. Right now, the data has been scraped from various sources, but eventually the company hopes the community will be able to participate and infuse the database with more relevant information. The founders say that the existing data set only has time and location, but no other inputs.

A tad similar to Backupify’s FreeSpace service, Kloudless helps to streamline your cloud workflow. What it does it take your attachments and push them to cloud storage services like Dropbox, Box, Salesforce, Google Drive, and others. The service works through a browser extension for Chrome and eventually for Safari and Firefox, and supports Gmail and Outlook.

Today it opened up a developer API so that third-parties can have their apps connect to enterprise systems.

Now that the startups have presented, the Grand Jury, consisting of The Founding Institute Adeo Ressi, futurist Mark Pesce, Ludlow Ventures’ Jonathon Triest, Sequoia Capital’s Alfred Lin, Jay Levy, Google’s Don Dodge, Harvey Allison, Steve Chen, and Brian Alvey, will congregate and pick the winners. There will be a total of 10 awards, with five each going to the Launch 1.0 and Launch 2.0 categories.

The awards will be livestreamed tonight starting around 7:00pm PST.

Read next: Inside Microsoft's decision to loan the Dell buyout consortium $2 billion