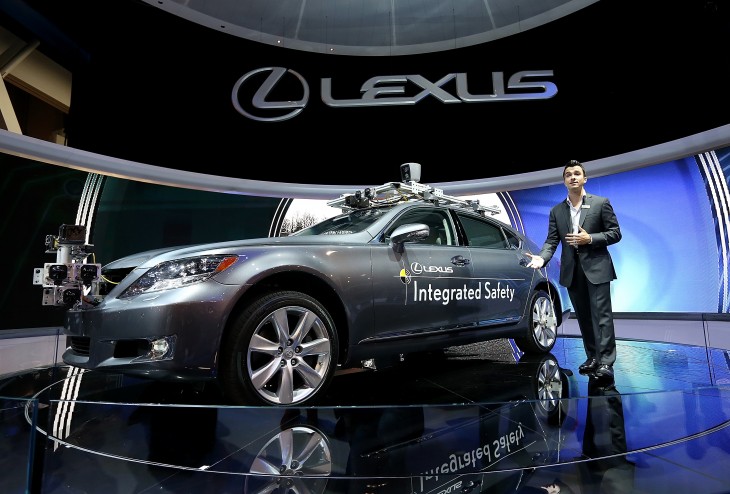 Following this year’s Consumer Electronics Show (CES), consensus from some was that the absence of battles years past yielded little excitement.  But one trend made headlines before the show began.

In anticipation, Toyota released a video clip of a self-driving Lexus using technology to monitor driver alertness, traffic signals and more. A spokesperson said that while “Intelligent Transport Systems” (ITS) technology is meant to respond to drivers, the Lexus LS also controls itself and monitors pedestrians.

Held January 8-11 in Las Vegas, CES included several cars able to drive themselves. According to some, this wasn’t that special. Wayne Cunningham wrote that the pre-show hype didn’t pan out, citing Lexus’ short press conference as damage control for Toyota’s acceleration issues in years past.

In theory, Cunningham’s correct. Google got its US patent in 2011 and a Nevada license for its self-drive car followed the next year. A convoy of self-drive cars developed by Volvo finished a 125-mile journey across a Spanish motorway last year as well.

When interviewed for this piece, several sources said the idea that self-drive cars are revolutionary things of the future is misguided. The UK Driver & Vehicle Licensing Agency said it doesn’t foresee ITS impacting driver’s license requirements when contacted for comment. And with auto parallel parking dating back to the mid ‘90s, self-drive features are well established.

“People think that autonomous driving is science fiction, but the fact is that the technology is already here,” Volvo Car Corporation Project Manager Linda Wahlstroem told the BBC last year. “From the purely conceptual viewpoint, it works fine and road train will be around in one form or another in the future.”

Simon Devonshire agrees—but adds that as self-driving cars become the norm rather than the exception, that impact won’t go unnoticed.

“Generally, I think our curiosity about driver-less cars stops at the incredulity of being in a car that has no driver – and yet despite flying being a far more tricky thing, we are quite happy to be passengers of an auto-pilot,” Devonshire, former head of B2B at O2, wrote this week.

“But the introduction of driver-less car technology will change everything.”

So what exactly is ITS? To quote the pros, it’s not a single technology. “ITS is actually a title for a group of technologies including automated (self-driving) functions, driver warning and assist functions,” explains Pim van de Jagt, Managing Director of the Ford Research Centre Aachen. “We need to differentiate what we are actually referring to, but in general, all these technologies will have somehow a positive effect on road safety.”

“A specific example would be transmitters mounted on the roadside that relay information about traffic conditions (like congestion) or about objects that may be beyond the driver’s field of vision. They could cause the vehicle to decide to slow down, stop or take an alternative route. “

The benefits don’t stop there. ITS technology enables cars to respond directly to each other and anticipate danger before it occurs.

“Vehicle to vehicle communications can come into play and help prevent collisions in many types of scenarios, for instance, at blind intersections; when a vehicle is changing lanes in another vehicle’s blind spot; or avoiding rear collisions with a vehicle that is stopped ahead,” Knight says.

If ITS sounds like a bridge between digital/physical worlds, it’s because it is. Already used in publishing and education, augmented reality—a live view of a real-world environment augmented by sensory input—features heavily in ITS.

“Existing and upcoming ITS systems will provide a lot more information to the driver,” van de Jagt says. “To do this in a safe and meaningful way, augmented reality will play an important role to better illustrate and highlight relevant information.”

Launched in 2011, UK augmented reality app blippar has partnered with brands such as Samsung and Nestlé. But as ITS gains traction in the auto world, it’s a sphere they’re keen to tackle. Founder and CEO Ambarish Mitra says Toyota’s showing at CES proved that augmented reality can communicate with external content–and serve as a new means of advertising to drivers. He is at work on a software level with auto manufacturers on projects including car and head mounted device design.

“Mobile is the primary device of the moment for AR adoption via apps like blippar….,” Mitra says. “Live cameras already act as sensors for ITS automobiles to navigate. AR makes road signage and other shop signage give additional information about points of interest… anything from deals, coupons, pricing, timing and more.”

The concept of ITS is already becoming so gradually normalized that consumer concern over fully self-driven cars may be minimal. For business, it’s another story.

Last September, The Guardian’s John Naughton questioned whether self-drive cars could be blamed for a new wave of unemployment. With 300,000 miles logged and not a single accident, safety stats have shown that Google’s self-driving cars can transport passengers with more success than humans. In fact, Naughton wrote, they’ve been such a success that despite the end of the US recession, companies haven’t followed economic history by hiring more workers alongside buying new equipment.

Instead, job creation didn’t happen. Theories about why abound, but Naughton cites the work of Erik Brynjolfsson and Andrew McAfee, authors of Race Against the Machine, as the most compelling.

“Crudely stated, their view is that advances in computing of the kind embodied by the Google self-driving car represent the next wave of job-eliminating technology,” Naughton wrote. “Many skills that were hitherto deemed secure (such as driving) may be devalued and might eventually become worthless, at least in the job market.”

Volker Heistermann agrees. A venture capitalist and former Google employee, he thinks there are several industries that may fight back against ITS advancements if they infringe on their work:

Auto insurance is a highly profitable industry. Autonomous driving may legitimately reduce the risk of accidents and cut into these profits. In the short-term, these new cars will not disrupt the industry, but over time autonomous driving will shrink the market for actuarial work as well as underwriting.

Computers will do less damage to a car than a human driver. Accidents, speeding, monitoring engine health, etc. Repair shops will have less clients. There will be new business to take care of autonomous vehicles, but it will be less frequent and more universal, cutting into specialty costs.

Autonomous cars will observe speed limits and may even help Americans evolve beyond speed limits as traffic patterns will determine a safe speed. Speeding tickets are an important source of revenue.

In the summer of 2012, the Washington, D.C. City Council tried to get Uber kicked out of town because they pose a threat to taxi drivers. Imagine how they will react to autonomous cars, especially those that are managed on a rental model? I would not expect any warm embraces.”

“On face, [statistics] suggest driverless cars are safer than drivers,” Heistermann concludes. “Given that most accidents are caused by drivers who are 1) impaired, 2) distracted, or 3) inexperienced, a computer can be safer purely by consistency even if it turns out to be worse than a sober, focused adult driver.”

And given that the an average human driver is involved in a major motor vehicle accident every 100,000-150,000 miles, it seems a hard task to argue that ITS is more dangerous than humans at the wheel.

ITS is not commercially available; it remains a research program limited to Toyota’s ITS Proving Grounds in Japan and other areas. But if drivers are uneasy about full self-driven cars becoming the norm, Knight says that reality’s closer than they think.

“There are safety features in cars today that approximate autonomous driving technology – people are just generally unaware of them and how they work,” Knight explains. “So the discomfort tends to reside with the degree to which the car takes over driving…”

“A PCS is designed to help the driver avoid or mitigate collisions with vehicles and pedestrians under a wide range of city and highway speeds, by day or night.  LKA is designed to gently steer the vehicle back into its given lane if the driver starts to drift. And BSM is designed to issue a warning to the driver if an approaching vehicle is detected in the driver’s blind spot.”

So if many ITS features are already here, why does Devonshire use future tense when he writes that they “will change everything?” Because for many business owners, the industry evolvement brought by fully self-driven cars will impact them in unprecedented ways. But there’s no pessimism in his prediction. Unlike Naughton and co., he says that as ITS becomes the norm, new business opportunities will emerge alongside it—and enterprise is poised to take advantage of them.

“New commercial opportunities, new industries even, [will] be invented as a result of the introduction of this new technology,” Devonshire predicts.

“And I think it will be down to entrepreneurs to recognize these opportunities and embrace them at an embryonic stage; possibly at times when everyone around them will think their idea to be absurd; have the imagination and the courage to recognize the new commercial potential, grab it, and build viable, vibrant and successful new businesses out of it. Businesses that will provide new services to enrich our lives, and importantly, also provide meaningful employment.”

With an economy still in recovery and this forecast nondescript, that might not be the most reassuring news. But Devonshire supports his points when looking at how mobile has expanded from its origins. He recalls how his role at O2 involved convincing small business owners to purchase smartphones, and how a device with data from a non-Nokia carrier seemed absurd to them.

Five years, 181 million iOS/Android devices, and a 129% increase in app revenue later, they’re no longer laughing. As an industry, app revenue didn’t even exist in ’08. So while businesses should take note of how ITS might change their work, those such as blippar that adapt with it, rather than fight it, have the chance to make bank in unimagined ways.

Read next: Mincss clears the junk out of your CSS, finds and removes selectors you're not using