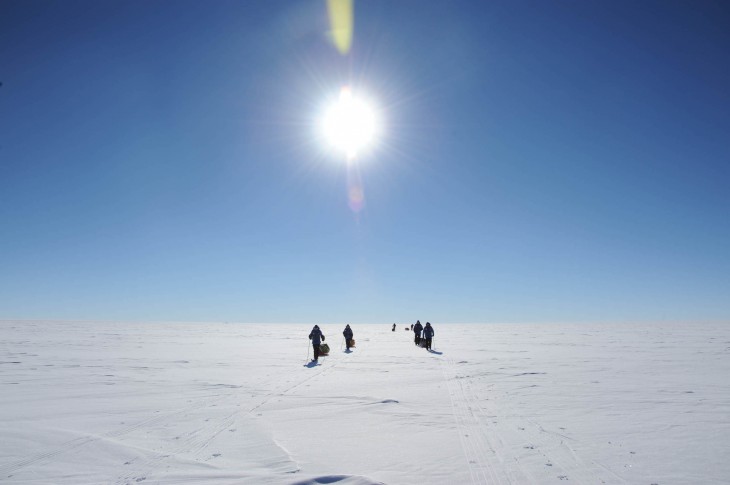 It’s no small feat that we humans have inhabited Antarctica for over 50 years. With recorded temperatures as low as 120 degrees Fahrenheit near the South Pole, the continent is uninhabitable, but a combination of ingenuity and perseverance has enabled us to take up residence there.

Signed in 1961, the Antarctic Treaty established the region as starting below the 60th parallel south. The agreement, which includes 50 nations, sets the continent aside as a preserve, allowing research programs from any country to operate there.

During the summer months, Antarctica plays host to as many as 4,400 residents. The winter population shrinks down to about 1,000. McMurdo, the main base of operations for the US there, alone is capable of housing about 1,000 people. Located 2,400 miles south of Christchurch, New Zealand and 850 miles from the South Pole, the station was built in 1955.

Generations of intrepid explorers have responded to the Antarctic challenge, beginning in the 19th century and continuing in the 20th with the likes of Ernest Shackleton, Roald Amundsen (the first to the geographic South Pole) and Robert Falcon Scott. Now in the 21st century, adventurers are adding social media as part of their treks. Felicity Aston became the first woman to ski across Antarctica on her own earlier this year. Sponsored by Kaspersky, she posted videos, blogs and an interactive map as she went.

Meanwhile, Alan Lock made history as the first visually impaired person to walk to the South Pole last year, celebrating the 100-year anniversary of the Amundsen’s trek. His journey was backed by Flip Video, VideoGenie, Sunpower, Revo and other companies that helped him blog and post videos of the experience.

To learn more about the role that technology plays in our mastery of the seventh continent, we spoke to Walt Ogburn, a researcher who has traveled to the South Pole as a US Antarctic Program grantee. On his visits, Ogburn stops by McMurdo before catching a flight to the South Pole.

It’s quite a trek for Ogburn to make for the sake of research, but he says that the South Pole is the best place to do work on observational cosmology, which he described in layman’s terms as “studying the oldest light in the universe.”

In order to observe cosmic microwave background (CMB) radiation, which has a temperature of 2.7 Kelvin, he needs a high altitude, dry climate and a stable atmosphere.

“The South Pole is about the best place in the world by those criteria, for the microwaves we’re interested in,” he said.

Antarctica has a few other sites that might produce marginally better results, but they lack the infrastructure to make it worthwhile.

“The South Pole is already much better than the best sites outside Antarctica, like the Atacama,” he said.

According to the USAP, scientific research performed at and near McMurdo Station includes: “aeronomy and astrophysics, organisms and ecosystems, earth sciences, glaciology and glacial geology, integrated system science, ocean and atmospheric sciences.”

Ogburn went on to note that life at the South Pole station is simpler than back home.

“In your daily life, you really have very little to worry about: your food and lodging are taken care of, your commute is about 15 minutes on foot (unless you decide to take the shuttle), you don’t need to carry around money or keys or anything like that.  You’re pretty much free to do your work, and everything else is completely taken care of.

The station is powered by jet fuel, which is brought in throughout the summer by C-130 jets. Power use is limited, but not so much as to require rationing. Residents are instead expected to regulate their own usage. However, water is limited, so they only get a couple two-minute showers per week. The indoor temperature is kept comfortable, roughly the same as buildings in normal climates.

As you’d expect, Antarctica’s not quite as wired up as we are back home (though it did recently get Google Maps Street View). To get online, it relies on a few different satellite families, including TDRS and GOES, and some of them are only accessible for a few hours out of the day. Older satellites that have run out of fuel come in handy, since they wobble in their orbits enough to be break above the South Pole’s horizon at times. Ogburn estimates the station gets a total of 8 hours per day of satellite communications.

In an emergency, the commercial Iridium satellite network can provide access any time of day, but it’s more costly, so it’s mostly used for email and urgent phone calls.

As for speed, Ogburn noted that the connection is strong enough to support audio calls, though the network will get bogged down during high volume periods like Christmas Day.

While Antarctica isn’t quite ready for streaming YouTube action, it’s come a long way in the past few decades. Connecting with the outside world from the continent used to be limited to HAM radio.

“You could reserve a block of time with the radio, then try to make contact with somebody out there, and if you were lucky, they would patch you through to a phone call home,” Ogburn said.

When I asked Ogburn what kind of operating system loyalties Antarctic residents have, he said that the machines he uses for his research are Linux based, while station computer labs are a mix of Windows PCs and Macs. Because of the sensitivity of research equipment like microwave telescopes, WiFi is restricted to certain areas, so tablets like the iPad haven’t taken off yet down south. E-readers like the Kindle and the Nook are becoming popular, though. Apparently, being holed up in one of the world’s most remote locations leaves plenty of time for reading.

Without cell service, the iPhone vs. Android rivalry doesn’t play out down there, though some resident do bring their smartphones around as cameras.

“The first time I went down, one of my friends said that his cell phone carrier insisted they do indeed have coverage in Antarctica, but of course that turned out to be completely wrong,” he said. That must have been an interesting customer service phone call.

Antarctic summers aren’t quite as cold as one might expect. The continent get 24 hours of daylight, with the sun just rotating around in the sky, and there’s much less wind than during the winter.

“So except for a few times when it gets cloudy and very windy at the same time, it’s not THAT bad,” Ogburn said.

The South Pole itself is austere, to say the least. Ogburn says there’s no living thing for “hundreds of mile.”

“It’s completely flat, uniform, and lifeless in every direction,” he said, though he did note it’s only pronounced when distanced from the station, since there are plenty of buildings, other people, and the sounds of human life.

I asked Ogburn what technological conveniences he missed most while down south, and he said the one thing is having to time phone calls for when satellite service is available. As for daily life, he misses things like “seeing living things — plants, birds, insects — and the smells of a natural environment.  Also seeing evening and night time again.”

It sure seems that the Antarctic crowd doesn’t take things for granted. Take, for example, this cheeky post from the Antarctic Sun detailing a memorial service for the retiring of Bertha, McMurdo Station’s dishwashing machine. Human dishwashers often tend to be enthusiasts willing to get a bit dirty just for the thrill of being near the action in Antarctica.

“There are a lot of people who are really driven to spend time in Antarctica, and are willing to sweep floors, wash dishes, whatever it takes to get there,” Ogburn said, adding that scientists are in the minority overall there.

I was curious to know what kind of digital entertainment Antarctic residents have access to. Ogburn said bases have lounges with video game consoles and movies. Interestingly, video formats range from Bluray all the way back to Sony’s defunct Betamax.

“It’s the only place I’ve every actually watched a Betamax,” he said.

I wanted to know whether Antarctic visitors receive two very important perks: a passport stamp for bragging rights and the chance to play with penguins. Sadly, Ogburn said no on both counts. Since the area is a wildlife preserve, it’s definitely hands-off with the tuxedo birds. No penguin playtime (and the lack of YouTube) definitely takes some of the heat out of my desire to visit. Still, it’s fascinating to see how modern technology makes its way down to bottom of the world.