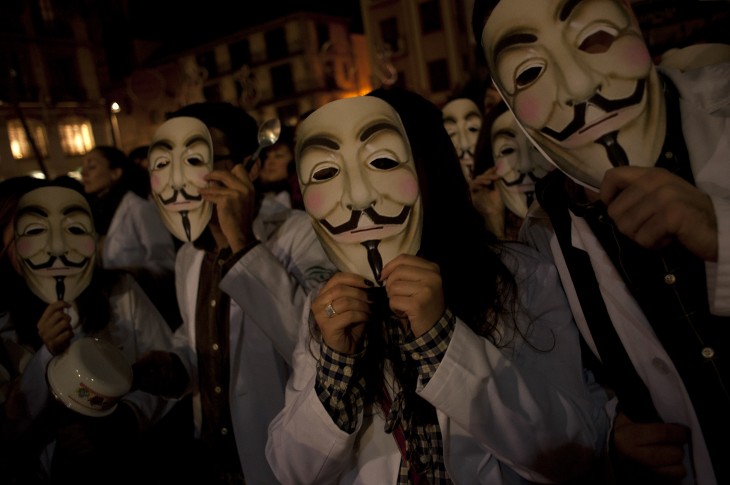 McAfee on Thursday announced its annual Threat Predictions report, highlighting the top security worries it predicts for 2013. Most of the forecasts are completely expected (mobile malware will become a bigger focus, crimeware and hacking as a service will expand, and large-scale attacks will increase) but one of them stood out like a sore thumb: “the influence of the hacktivist group ‘Anonymous’ will decline.”

This is a very bold claim, and frankly one that we think McAfee shouldn’t be making. Nevertheless, the security firm offered the following reasoning behind its prediction:

Due to many uncoordinated and unclear operations and false claims, the Anonymous hacktivist movement will slow down in 2013. Anonymous’ level of technical sophistication has stagnated and its tactics are better understood by its potential victims, and as such, the group’s level of success will decline. While hacktivist attacks won’t end in 2013, if ever, they are expected to decline in number and sophistication.

This seems equivalent to saying that the Anonymous hacktivist movement will accelerate in 2013 due to the number of successful attacks it has made. This is as plausible as Mcafee’s claim.

The security company doesn’t appear to have any data to back up its claims, meaning its conclusions are merely conjecture. In fact, we have seen nothing to suggest the group is declining, regardless of whether or not one believes they are using sophisticated methods of attack.

In fact, I would argue that Anonymous is becoming more and more influential as we’ve seen the movement growing throughout 2012. While the group still largely performs rather simple DDoS (overloading websites with traffic to take them down) and doxxing (publicly posting private information about a targeted individual) attacks, at least some of its members have shown the technical know-how to hack sites, deface them, and more importantly, steal and leak sensitive data.

Whether or not this is being done largely by people who some dismiss as “script kiddies” doesn’t really matter. The damage is being done, and Anonymous is likely to keep doing it.