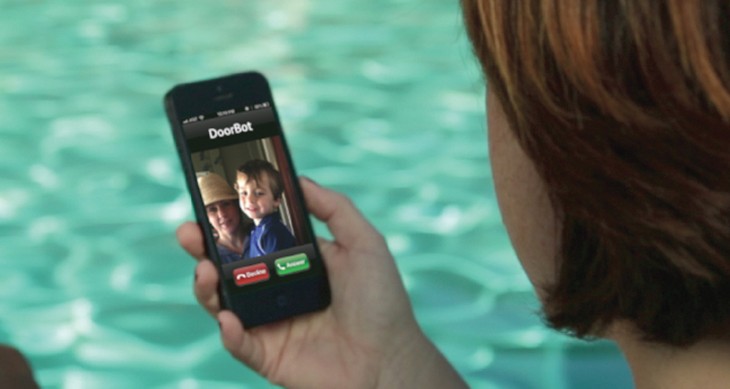 As we recently explored, the Internet of Things is starting to appear in our lives and this means not only great strides in software and network development but also a resurgence in the love for hardware.

Much as we love to obsess over the data we’re generating and work out interesting ways to put this to good use, there is also a need for nice objects that collect data and even help to automate our lives.

At LeWeb, Jamie Siminoff, who you might recognise as the CEO of Unsubscribe.com, now a part of TrustedID, described the crowdfunding platform for hardware, Christie Street.

However, he’s not just talking about neat hardware, he’s also creating it and the first product on Christie Street is Doorbot, a doorbell with a video camera that links to your mobile so you can effectively answer the door from wherever you are. Check out the video for more on how it works.

Siminoff notes that the interest in hardware creation is not so much to do with a fashion, but more a perfect storm of technologies that support interesting new products. “One of the reasons we are seeing an uptick in hardware is mobile,” he told The Next Web. “Without a mobile phone and Internet everywhere, it’s not great to have a wireless enabled doorbell; but with mobiles, tablets and Internet, it’s the best doorbell out there.”

The commitment required to create a physical object can be expensive and time-consuming. It’s not a challenge that everyone is willing to take up, especially when there are so many ways to enable people to create for the Web alone.

Siminoff agrees that digital creation often poses fewer challenges, “I wouldn’t say it’s easy, but when you dream up something to do with software, you write it and it works. Hardware’s a harder thing to build, it has more upfront cost, and it takes a little bit more expertise. But for me that’s the attraction, it makes it more fun and challenging.”

He also points out that there is a great pleasure to be taken from inventing something you can show people in the physical world. “I’d say it’s way more satisfying,” Siminoff explains..”Any of the success I’ve had in online stuff, it has its’ great moments but there’s something that is still missing. Sitting with someone and handing something to them across the table and saying “This is our new invention”, there’s something extremely fulfilling about that. You cannot get that from software.”

So inventing objects is no longer the realm of crazy guys hiding in the shed making Heath Robinson-style contraptions anymore. Siminoff hopes that Christie Street will help more inventions see the light of day (or even electric light, as Christie Street as the first to be lit with Edison’s electric lights and home to the Edison Centre at the Menlo Park Museum in New Jersey).

“This should allow someone who works in their shed to have access to customers and capital to build things,” says Siminoff. “There’s a lot of people who have dreamed great stuff up, but really until right now it has not been easy to highlight that. With social networks enabling things like Christie street, we can really get crowdfunding to work in a very efficient manner.”

So, with so many things to invent and some great ideas coming from the stable of networked objects, why make a doorbell first? It appears that necessity was the mother of this invention.

“We work in a garage and we keep missing people who come to the door,” explained Siminoff. “When we do hear the door we have to run down to get it, you can’t say “no we’re not interested”, or “yes leave the package” without going to the door.”

Excitingly, Siminoff has greater ambitions too. “For us this will not be the only product we do, it will be one of many. Because of the Internet enabling everything at this point via mobile, it really makes sense,” he says.

Working via the cloud is opening up opportunities for a number of new products and open architecture is already creating partnerships and new ways of working between them. The Doorbot works well with Lockitron, the remote mobile way of locking and unlocking doors – this makes a lot of sense, if you can see who is at the door via a video feed to your mobile, you might want to also remotely let them in.

“We literally just contacted Lockitron and said, “you have an awesome product”, says Siminoff, describing how he came to work with that team. “If it was up to us we’d build everything we think of but there’s time constraints and money constraints. So we contacted them and said it would work so well with what we did. They replied and said they loved what we did and so we talked about putting it together. It took about ten minutes, they have an open architecture so it was literally that quick and easy. It’s a really easy way to work.”

So when it comes to new products emerging on the market, how can platforms like Christie street encourage a sense of trust among consumers that will encourage them to buy? Siminoff says that already the emerging products are seeing a promising start.

“When you see products like Lockitron doing 2.5 million dollars in pre-sale, that’s a pretty good indicator that people are ready to buy this kind of stuff. We’re seeing a lot of pull from retail for these types of products because retailers don’t want to be out done with old stock. With Christie Street, where we’re focused on new products we can will help overall. We can bring retailers in and have them work in a more packaged fashion rather than working with inventors one at a time.”

So are we really seeing a turn toward hardware? Siminoff thinks so, but no just hardware on its own. “It’s a blend,” he says. “It’s not as pure as saying it’s just hardware. Doorbot is enabled by applications, cloud software and more. I think you’re going to see a bigger connection of physical things. Apple proved that having hardware and software together is a very profitable and good business to have. This can be a very powerful way to create value.”

More power to the maker. And if your idea doesn’t fit with Kickstarter under its prohibited items list as Lockitron found out and described at LeWeb, it’s possible that your project might find a hardware home on Christie Street.

Read next: Motorola to exit South Korea in 2013, as Google restructuring claims another 500+ jobs