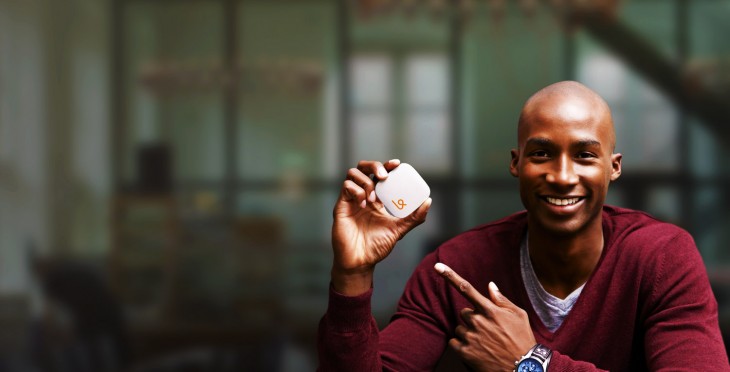 After demoing in New York and raising $1 million, TechStars alum Karma is launching its “social hotspot:” a $79 device which rewards you with free data when you share your Wi-Fi connection with strangers.

Yes. You read that right.

Karma, which calls itself “a simple and honest mobile provider,” isn’t trying to sell you on speed or hardware — the startup touts (what appears to be) a branded Voyager hotspot, running off of Clear‘s WiMax U.S. network via Simplexity — instead, Karma’s magic lies elsewhere, in a concept called “social bandwidth.”

Upon connecting to your hotspot for the first time, two curious things happen: first, the device’s network takes on your name (e.g.: “Harrison’s Karma”), second, that network refuses to be password protected, because when a stranger, friend or even a lover connects to your Karma device, you’ll both earn 100MB of free data.

Now, let that idea sink in for a moment. The concept is surely tempting, especially in a city like New York, where a menagerie of freelancers fill every coffee-house, in search of open Wi-Fi networks. Simply bring one these bad boys into a busy, laptop-ridden workspace, and you could…in theory…never pay for bandwidth again, or, at the very least, end up earning free gigs here and there to lower the overall cost. The latter is, of course, far more likely.

Karma’s on-boarding process for new customers is dead-simple. Join the open network, connect your Facebook account (cue privacy rants) and collect your free gig of data. Your Karma network will rename itself and is ready for use.

Inside Karma’s dashboard, which blows its competitors away in terms of design aesthetic, you’ll be able to see how much data you’ve used and earned, in addition to purchasing more data by the gig once you run out. Karma charges a flat rate of $14/gig; it’s neither cheap nor pricey.

On its monogamous relationship with Clear, potential users will be glad to know that Karma considers itself carrier agnostic. The company may support additional networks soon, but for now there’s no public timeline available.

If you ask us, a polygamous arrangement between Karma and 3rd party carriers — rather, dumb pipes — is imperative to Karma’s long-term success, as it could find strength in numerous providers, while multiplying its potential user-base.

Is It Good Karma?

As with comparable mobile hotspot offerings like Verizon’s MiFi, Karma’s device isn’t priced to be your sole Internet connection…unless you get lucky and really pile up on free bandwidth, an unlimited, hard-wired provider is your best choice in terms of overall speed and your wallet.

But for many working within and outside of the tech scene, having access to a mobile connection is a must, affording the ability to work and browse whenever and wherever the need arises. With just a $79 price tag and zero commitments, this is the perfect companion for that use-case.

Bonus points for the wild concept, which we truly hope lasts and grows.

Read next: HopStop hits 100 major metropolitan markets in the US, approx. 80% of Google Transit's coverage