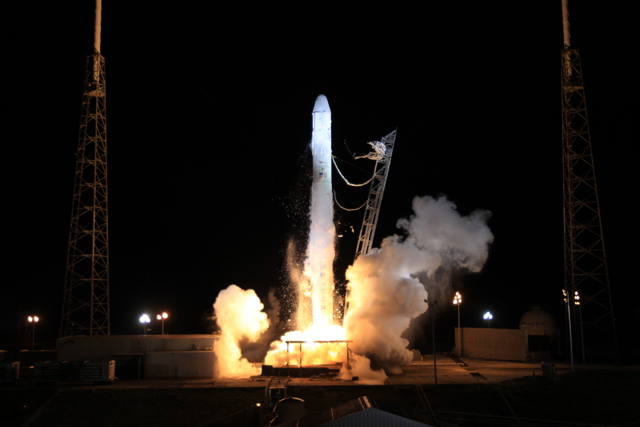 After becoming the first private company to dock at the International Space Station 9 (ISS) earlier this year, SpaceX has dispatched its Dragon capsule to deliver supplies to the ISS under contract from NASA.

SpaceX live streamed the launch and subsequently posted the liftoff to YouTube:

BBC reports that Dragon is carrying “400kg of food, clothing, experiments and spares” to the astronauts at the ISS. The capsule is scheduled to dock at the station on Wednesday.

“We are right where we need to be at this stage in the mission,” Elon Musk, SpaceX’s CEO and Chief Technical Officer, said in a statement. “We still have a lot of work to do, of course, as we guide Dragon’s approach to the space station. But the launch was an unqualified success.”

SpaceX has signed on to fly at least 12 resupply missions to the ISS for NASA. The Dragon, which SpaceX touts as the only spacecraft capable of bringing a “significant amount of supplies” back to earth, will be hauling back scientific materials and space station hardware on its return flight.

“This was a critical event for NASA and the nation tonight,” NASA Administrator Charles F. Bolden said in a post-launch press conference. “We’re once again launching spacecraft from American soil with the supplies our astronauts need from space.”

In May, we reported that SpaceX has a backlog of about 40 launches, worth about $4 billion. The company has as many as 29 missions planned through 2017. NASA is also pursuing a contract with Orbital Sciences Corporation, another space-bound company that is looking to deliver cargo to the ISS.

Musk has aimed for the stars and commercial space flight is becoming a reality. It’s a great time to be alive, I’d say.

Read next: China's Huawei and ZTE deemed security threat by US Congress