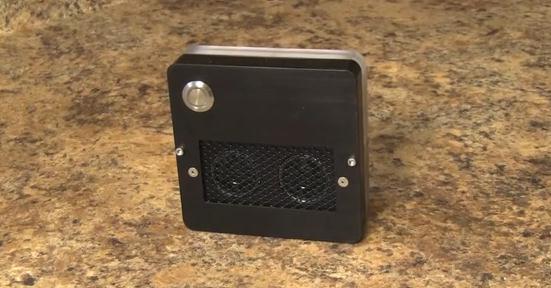 Kickstarter needs little introduction in many circles. The US-based crowdfunding platform has hit the headlines on a number of occasions in recent times, for some of the quirky and cool projects that have gained funding through it.

Following in the footsteps of Pebble, OUYA has gained a lot of exposure of late as it plans to launch its indie games console off the back of the $8m+ funding it received through Kickstarter. And now a neat new ubiquitous computing device is looking to win the hearts and minds of the public too.

Kicking off today, Team Ubi and the Keetsy Corporation is looking to raise $36,000 to see its Ubi dream come to fruition. It’s essentially a voice-controlled computer that plugs into a standard power outlet and connects to the Internet via a standard WiFi connection.

The ubiquitous computing concept is based on the principle that the world around us is capable of processing information and connecting to each other – it’s a little like the Internet of Things. Imagine a fridge magnet that can order you pizza, and you’re thinking along the right lines.

The team behind Ubi is hoping to usher in a new era of ubiquitous computing – so you can forget about your iPhone, laptop and tablet. With the Ubi, you talk to it as it blends seamlessly into the background. You could perhaps use it to search the Internet using your voice as it relays information back to you. It could also be used as a speakerphone, intercom, and home monitoring system.

The Ubi is equipped with temperature, humidity, air pressure and ambient light sensors to provide feedback on the environment. There’s also potential for it to be used as your entertainment system, as the Ubi has stereo speakers on board, as well as a microphone, and bright multi-colored LED indicator lights. Those using the Ubi will be able to program and control it remotely and with their iOS and Android devices.


Further applications that may become available for the Ubi include assistance for those with hearing or sight impairments and for the elderly or those with mobility constraints. The Ubi platform will be open for developers to integrate other devices via Bluetooth 4.0 or RF transmitters.

At the time of writing, the Toronto-based Ubi team has raised $7,573 of its $36,000 goal, with 35 days still to go. It hopes the money will be used to help bring the costs down, and help it become safety certified. Given that Pebble managed to raise $10m to bring its smartwatch technology to the masses, and OUYA reeled in $8.5m, I’d say Ubi’s target is more than achievable. And it’s certainly an interesting concept.

You can pre-order your Ubi starting from $189 for a single Ubi, up to $649 for five of them…one for each room in your house, maybe? If the campaign’s successful, the Ubi will be widely available in early 2013.