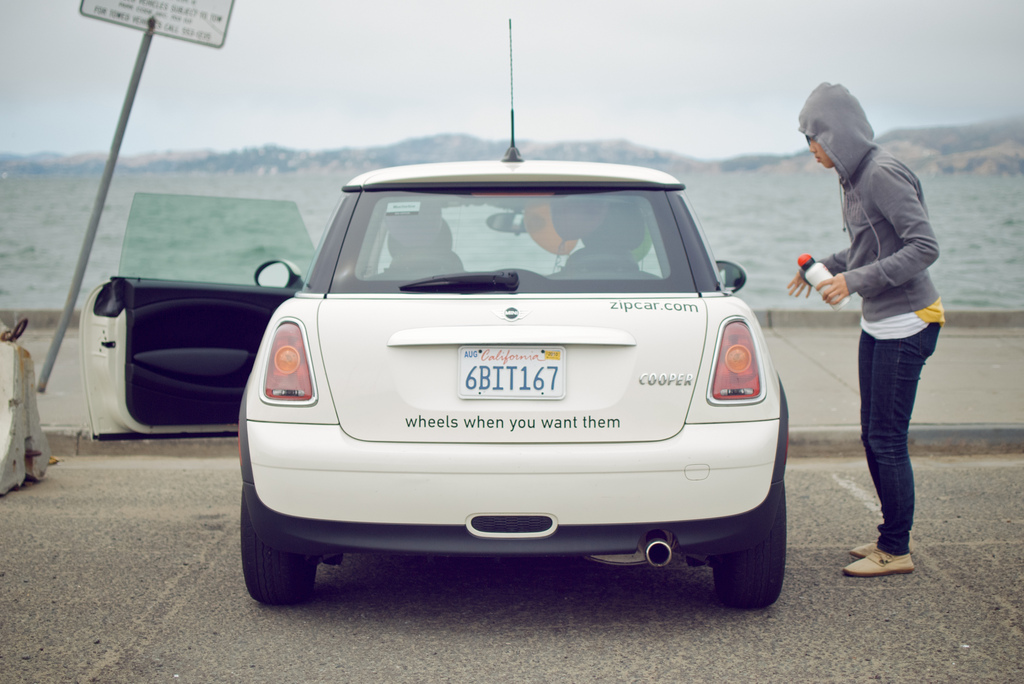 This summer, millions of people will pile into their cars in search of the closest coastline. Hundreds of thousands of sedans, SUVs and sports cars will be stacked bumper to bumper…with a plethora of empty car seats.

Our highway system stretches across the globe like clogged arteries. And a solution to its physical infrastructure doesn’t seem to be coming around the bend anytime soon. Instead of building new roads and new cars, a few young companies are building the potential for a collaborative method of transportation: carpooling.

While the idea of carpooling is nearly as old as the automobile, it’s been reinvented thanks to social networks, along with mobile and location-based technologies. Now you can take advantage of those spare car seats whether we’re finding a Friday night lift to the beach or giving someone a ride to a festival for some much-needed cash to tackle costs like maintenance, insurance and gas. Let’s meet the 3 startups driving this change.

Zimride – The friendliest way to rideshare

Co-founded by Zimmer and his friend Logan Green, Zimride is a ridesharing startup that leverages the Facebook platform to connect people who want to carpool. It sets itself apart from the plethora of other ridesharing startups by being the only service that requires Facebook Connect. (Fun fact: John Zimmer’s co-founder Logan Green was in Zimbabwe when he thought of the startup’s name so it’s actually unrelated to his surname.)

COO of Zimride, John Zimmer, says that the number one reason people use Zimride the first time is to save money. But he insists that customers come back because of the great experience they had. Zimride, by the way, is the largest online ridesharing company in North America. The company surpassed more than 100 million rideshared miles in 2011. (So Zimmer probably knows what he’s talking about.)

The 27-person company is led by CEO Logan, who has maintained a long obsession with transportation and technology since launching the first car sharing platform at UC Santa Barbara. A few years later in 2007, the first iteration of Zimride was available as a Facebook application. When the startup received $250K from the fbFund (a $10M seed fund and joint venture backed by Facebook, Founders Fund, and Accel Partners) in 2008 for further development, Logan convinced John to quit his job at Lehman Brothers and use Zimride to drive across the country to Silicon Valley.

“There are hundreds of car-sharing sites and services out there because it’s not complicated to organize trips and connect travelers from point A to point B, but the real issue is getting usage and critical mass,” says John. Instead of going after the masses, the startup launched with universities including Stanford, Cornell, UCSF, USC, UCLA, Harvard and the University of Michigan. To date, Zimride has partnered with over 100 schools across the nation.

Zimmer lays out the 3 most important building blocks of his ridesharing company for us.

Since its launch, the startup has facilitated over 26,000 carpools, saving its user base of 350,000 registered users over $50 million in vehicle operating expenses like gas, maintenance and insurance. With Zimride, you no longer need to book a Greyhound ticket and end up riding next to a few convicts, or worse — a screaming baby.

Zimmer admits that Zimride has also allowed carpoolers to make unexpected connections along the way – like relationships. “One guy found a ride to a Jack Johnson concert and the driver ended up becoming his girlfriend,” Zimmer remembers. “They now live together in Maryland.”

In 2010, Zimride raised a $1.2 million seed round led by FLOODGATE, K9 Ventures and a group of angels including Keith Rabois and Teddy Downey, followed by a $6.2 million Series A round in September, 2011 from Mayfield. While the company has plans for international expansion, it’s heads down this year, focused on user experience.

In April, Zimride launched a mobile version of its online service, which lets users send and receive messages, view user profiles, post, search and book rides from their smartphones. This summer, Zimride has partnered with a slew of awesome festivals like Bonnaroo, Sasquatch in Washington, Lollapalooza, the Dave Matthews Band tour and the Jack Johnson tour in Hawaii to make ridesharing between music lovers that much easier.

In May of this year, the German-based Carpooling.com announced 30 million rides offered on its platform — and it’s still months away from its U.S. launch.

“We want to make carpooling a new, convenient and social transportation alternative. We don’t focus on specific user groups such as students or music lovers, or specific technology such as real-time ridesharing. We just want to make it easy and affordable for everyone to go from [point] A to B,” says Odile Beniflah, the company’s International Senior Product Manager.

With 3.7 million registered users to its nine local sites and daily access to more than 650,000 transport opportunities, the internationally-savvy Carpooling.com moves an average of 1 million people per month across 45 countries, resulting in savings of 772,000 tons of C02 and 386 million liters of gas.

How it works: Drivers post empty seats in their cars, the time of departure and the price. (Carpooling will also recommend an average price.) Drivers can also set preferences like “I only accept small luggage” or “I like rock music.” Users login and pick a time and destination. If a ride isn’t available, Carpooling will promote train or bus options.

Similar to Airbnb, once a transaction has taken place users are prompted to leave feedback — how punctual was the person, how pleasant was the ride, were they good story tellers, etc. The better rating you have, the more likely you are to find a ride or passenger.

The company also recently released its new iPhone app so you can find and book a ride on-the-go everywhere in Europe with your smartphone and pay online with Paypal. You can text your driver or passenger directly on your mobile and have your e-ticket always with you along with user profile info as well as info about the car and the meeting point location.

While the company raised its first round in 2009 from a venture capital firm, it won’t disclose any more details. “We’re a German company so we’re extremely discrete about our funding,” says Odile. “But we’re profitable and growing extremely fast.”

“Our success metric has always been our users. Are they happy? Are they active? Are they offering new rides? The fact that 30 million rides have been posted on our platform is truly a testament to the popularity and explosive growth of ridesharing today. To know that we connect millions of people around the world, facilitate friendships, and help our users save money is truly a gratifying and satisfying experience,” says Markus Barnikel, CEO of Carpooling.

Last year, three friends needed a lift to the Burning Man festival in Nevada’s Black Rock Desert. After struggling with the available options on Craiglist, they set up Burningmanrides.com. The site was a small success. Founders Jason Shen, Randy Pang and Kalvin Wang were three of 1,600 users festival-goers who used the site to book 1,200 rides. 5 pilots even posted flights in and out of Burning Man, which were booked in minutes — including by the site’s founders who noted their pilot looked an awful lot like Indiana Jones’.

Inspired by this success, the team launched Ridejoy in October 2011 with funding from Y Combinator. “Ridejoy is the best thing that we could be working on,” says Kalvin. “Our goal is to efficiently and conveniently combat traffic.”

Currently, Ridejoy offers its services to the biggest cities on the West Coast including San Francisco and Portland. In California, the laws that regulate inter-city travel are handled by the state while intra-city travel is handled by the city. The team is quick to point out that it’s technically against the law for drivers to make a profit from ridesharing, so they cap the rate at 25 cents a mile to cover gas, insurance mileage and maintenance (similar to the IRS reimbursement rate). Ridejoy is working on picking up sufficient critical mass before expanding to other parts of the country.

“Carpooling has been around for a long time. It’s well understood. It’s not something that the law sees as negative. It’s a good thing. We help take passengers to places they’re already going,” says Kalvin. Similar to other ridesharing sites, Ridejoy allows you to connect with Facebook, write references for people you’ve taken rides with or given rides to, as well as your friends in the system.

Ridejoy allows you to upload your driver’s licence so other users can see your details. The service recommends that all riders ask to see their driver’s car insurance, which would cover them in the case of an accident. You can also request a background check on yourself so this verification will display as “cleared” on your profile page.

Ridejoy is laser-focused on longer distance trips and supporting an open community. “We’re really serious about customer support,” says Kalvin. “We check in with our users at the end of every single ride with a personal email.” In addition to Burning Man, this summer Ridejoy will be servicing a slew of festivals along the West Coast.

While they won’t divulge specific numbers, Kalvin says Ridejoy has facilitated thousands of rides with as many users. The service is free unless drivers opt to require passengers to pay via credit card. (In those situations, Ridejoy adds a 15% service fee.)

In February of this year, the San Francisco-based startup raised a seed round of $1.3 million from Freestyle Capital, Lerer Ventures, SV Angel and other venture capitalists.

The gears don’t stop at these 3 startups. We’ve discovered another half-dozen more in our research including Blablacar, which is tackling universities and festivals in the UK and Ridehack, which is similarly tackling big outdoor events, in addition to conferences like TED. There’s also goCarShare, which is still in beta, and has picked up a lot of momentum in the UK…and the scarily designed CarpoolWorld.

As part of the collaborative consumption movement, a batch of startups are tackling peer-to-peer carsharing such as Getaround, RelayRides, Wheelz and Whipcar. It’s important to note that while these companies are in a similar space to carpooling startups, they’re not direct competitors.

While the word itself invokes memories of school field trips, carpooling is part of the future of mobility that’s been made exciting, fun and safer because of social networks. With rising oil costs, traffic congestion and concern for Mother Earth, carpooling provides an affordable solution with social and environmental benefits.

As you might expect, loads of people end up connecting in a variety of ways after meeting on carpooling services. So, if saving the planet and covering costs aren’t motivating enough, now you have another reason to try carpooling this summer. Have fun roadtripping!

Read next: Jason Freedman of 42Floors - "Transparency in an industry drives efficiency"