Audio sharing platform SoundCloud has announced that it has signed up a total of 10 million users, rapid acceleration in takeup for the startup which launched in 2008 and had just 3 million users in February 2011.

The Berlin-based startup announced 5 million users in June 2011, meaning that the total number of registered users has doubled in the space of seven months. We caught up with CEO and co-founder Alexander Ljung at the DLD conference in Munich, Germany, today, to find out what was driving this growth. He explained that its mobile apps (with a total of 5 million downloads) and developer ecosystem (over 10,000 apps either available or in development) are helping to push the growth.

Ljung admits that the company has been “lucky” to tap into the growth of audio on the Web, and the SoundCloud now hosts an “Incredibly broad” variety of recordings with over 3.3 million unique tags in use to describe the types of audio available.

For 2012, Ljung says that the company is focusing on increasing the number of third-party SoundCloud integrations, developing its mobile offering and increasing user growth and engagement further. He has nothing to say on any addition monetisation beyond the existing premium account offerings, which he says “works really nicely.”

Storytelling with the new Story Wheel 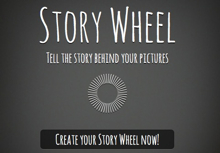 To mark its 10 million user milestone, SoundCloud has launched a new service called Story Wheel, which is a Web app that displays slideshows on top of audio. The product started as hackday project and is now part of the SoundCloud Labs showcase of experiemental uses for the platform.

SoundCloud founders Ljung and Eric Wahlforss have created their own Story Wheel presentation about the history of the company, which you can view here.

Listen to our full interview with Alexander Ljung below.

Read next: New RIM CEO to focus on marketing, execution and consumer markets. Is that enough?