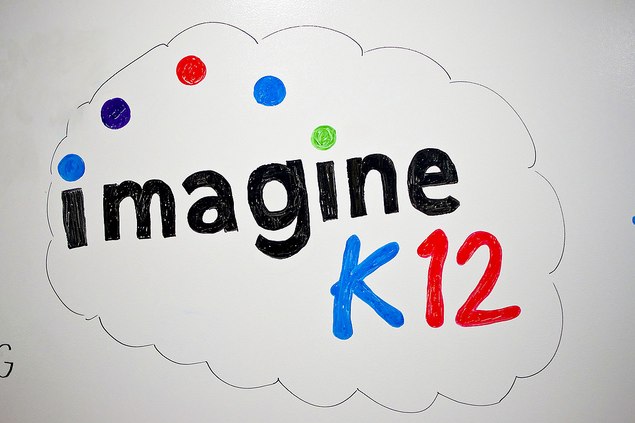 Last night, I attended a gathering of some of the smartest technology minds focusing on Education for grades K-12. I didn’t know what to expect, other than Newark Mayor Cory Booker and LinkedIn‘s Founder and Chairman Reid Hoffman being there to listen to seven companies from the ImagineK12 startup incubator in Palo Alto.

In a small office within the Palo Alto aol building, teams with big hearts (and sometimes very nervously) discussed their views on the future of Education for children all over the world.

I’m going to be doing a few interviews with some of the companies in the near future, which include Goalbook, educreations, and Eduvant. This is a space that I’m very passionate about.

Each team had one thing in common, their belief in the importance of technology to make change happen in a system that hasn’t changed in decades.

That change could very well come out of the ImagineK12 incubator, which says this about itself:

We believe technology is transforming K-12 education. The infrastructure, hardware, software, and platforms are either available or being developed that will change the nature of how we teach our children in profound and far-reaching ways. A high-tech wave is beginning to sweep through the educational world largely driven by technology entrepreneurship. But the impact of those entrepreneurs will depend on the quality of their ideas, their ability to execute, and their ability to get funded.

Imagine K12 is a for-profit enterprise looking to invest time, experience, energy and resources in entrepreneurs who have a passion for education and the technical know-how to create their vision. Over a three-month period, we will draw on our extensive entrepreneurial experience, understanding of the Silicon Valley ecosystem, and knowledge of the education industry to help bring your idea to life, get your company funded, and to get your company on the road to success.

Last night wasn’t a pitch session for funding, although I’m sure most of the startups hoped that Reid Hoffman would take interest, as he is an extremely prolific VC now. Most of the nearly three hours were spent on presentation of the products, and Q&A by Mayor Booker on the nuts and bolts of education, and business advice and guidance from Reid Hoffman. For these companies, this type of audience is nearly unheard of, and each one took notes and paid full attention. And of course, vice versa.

Newark Mayor Cory Booker shared that he can no longer watch the way school systems have worked, there has to be change. Technology, he believes, can bring that change.

The theme of the night appeared to be data. Educational institutions have a huge flow of data, some not even digitized, and have no way to pour through it to make smart decisions for their schools or more importantly for their students. Some of the companies have come up with ways to use data to incentive students with behavioral issues, make better use of a Principal’s time by giving them a dashboard of student and financial data in real-time, as well as share lesson plans all over the world.

A few of these companies seemed to intrigue both Booker and Hoffman, causing Booker to set up meetings between the companies and schools in Newark immediately.

Why isn’t there more of a focus on technology in education? Lack of money. Schools are notorious for having financial issues, even though technology can help with that, and there isn’t a steady flow of VC funds for those who want to focus their efforts on the education space. It seems as if ImagineK12 is set to change all of that, and having Booker and Hoffman involved certainly doesn’t hurt its cause.

Let’s also not forget that if we put more technology in schools, we’ll have more technologists like Mark Zuckerberg and Steve Jobs for years to come.

You can view more photos from last night below:

Read next: Murdoch says Myspace was "mismanaged in every possible way", could have sold for $6 billion