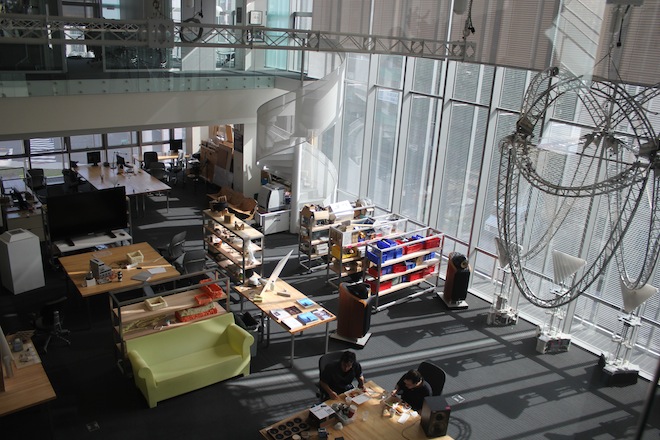 During a lunch break at this week’s emTech conference, Director of MIT’s Media Lab Joi Ito was kind enough to give me a tour of the famed facilities. Explained Ito, “We like to think of ourselves as anti-disciplinary in our approach to learning. Everyone here is deeply devoted to their field, but very respectful of each other and it shows.”

Ito points to the architecture of the Lab itself as part of the process for collaboration. Rebuilt in 2009, the Media Lab extension space was designed by Japanese architect Fumihiko Maki. Students from various disciplines can peek through the expansive glass walls and find inspiration in each other’s projects. According to Ito, it’s through this spirit of collaboration and respect that innovations like Yo Yo Ma’s hypercello sensors can later inspire technologies in car airbags.

Today, Media Lab grads are hard at work collaborating with their teams, but also, using the collaborative platforms of today to build the tools of tomorrow. Two innovations hailed as the cheap platforms of choice are the Microsoft’s Kinect and the Android OS.

Two years ago Sixth Sense was one of the Media Lab’s amazing interfaces of the future being used to track gestural commands with a camera, small wearable projector, mirror and colored finger caps. The grand total of the parts of Sixth Sense were around $350 dollars.

Since then Microsoft’s Project Natal unveiled in the form of the Kinect and gestural interface prototyping has become even less expensive. For the cost of a $150, students get a device, sensor, and access to the Kinect’s open source driver and SDK. In just two years, the students of MIT have produced the Chrome Kinect browser extension and subsequent UI hack, an impressive holographic real-time image capture device, a Kinected teleconferencing system and the above real-time visual odometry system for autonomous helicopter control.

In 2007, Google released Android under the Apache open source license and since then a number of inexpensive devices have emerged with Android handsets outpacing Apple in the US. Hobbyists and academics have taken full advantage of the ability to hack on a device’s camera, touchscreen functionality, GPS, accelerometer, gyroscope, magnetometer and pressure control. What might have cost thousands in the past, is now often less than $100 dollars and Media Lab grads have been hard at work testing Android’s boundaries.

Examples of Android-powered projects include the Sensei language learning interface, the Funf personal tracker tool, the AMA application for autism analysis, the above NETRA Eye Exam (Near-Eye Tool for Refractive Assessment) and the interactive Kombusto Dragonbot.

The Lab recently announced the launch of a Center for Mobile Learning where its first project will be to tweak the framework for Google’s App Inventor. The suite is expected to help non-programmers produce their own mobile applications and is expected to be released shortly as open source code.

To check out more of Media Lab’s projects visit the blog at blog.media.mit.edu.