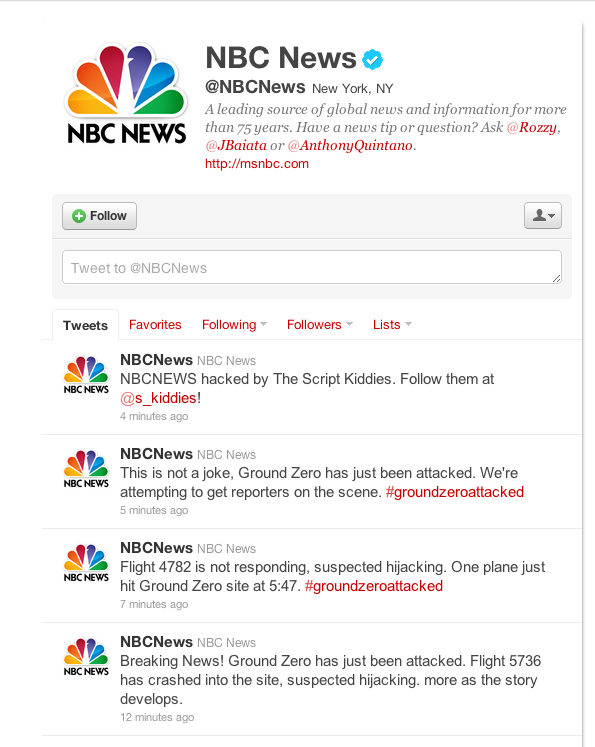 The Twitter account of NBC News has been compromised by a hacking group calling themselves the ‘script kiddies’ and has been Tweeting out false messages about a terrorist attack on Ground Zero. The Script Kiddies group is apparently sympathizing with hacking group Anonymous as the name appears to refer to the Department of Homeland Security calling Anonymous ‘just a bunch of script kiddies’ earlier this month. Updated with statements from NBC and Twitter below.

The group has just changed the NBC logo to a graphic and altered the ‘about’ section of the account as well. The about info links to a Twitter account that has been suspended.

NBC has confirmed the hacking with a Tweet from Ryan Osborn, their Director of Social Media, saying “The @NBCNews account has been hacked. Working on it. Please don’t retweet any misinformation.”

Update: NBC has issued a statement about the hacking:

The NBC News twitter account was hacked late this afternoon and as a result, false reports of a plane attack on ground zero were sent to @NBCNews followers. We are working with Twitter to correct the situation and sincerely apologize for the scare that could have been caused by such a reckless and irresponsible act

Read next: The best selling iPad app on the App Store was created with Adobe Flash