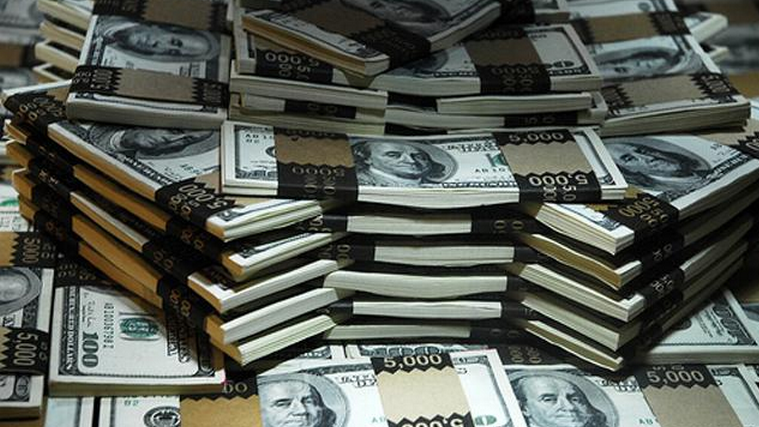 Everyone has heard the classic maxim of corporate finance, that ‘cash is king.’ One business luminary once likened cash on a corporate balance sheet to oxygen: “once the cash is gone,” he said, “everything stops.”

We cover two types of technology companies here at TNW, both startups and giants. Today we are looking a the titans of tech, the largest, most powerful, and richest companies that make up much of the landscape of technology that we know so well.

Before we get into the meat of this post, I want to make a few things plain. The first is that corporate finance is notoriously complex, and even with the use of GAAP (Generally Accepted Accounting Principles) numbers exclusively, there is leeway that can be hard to parse. This post is a thought experiment, and nothing more. Nothing written above of below should be considered investment advice.

Today we are going to look at the ten largest technology companies (by market cap), add up their combined market capitalization and total cash supply, and exegete over the mammoth numbers. It will be fun, I promise.

As we noted, we are dealing with cash. But what counts as cash on a corporate balance sheet? The answer might surprise you. All corporations have cash, which is to say they have bank accounts that contain normal currency. But many wealthy companies put some of their cash to use. For example, if your company only needs $500 million in cash on hand for the quarter, and has $4 billion sitting in bank accounts, it might drop the excess into short-term investments. Why not earn a bit more on the money?

But we are going to include more than just short-term investments and cash in our total definition of ‘cash.’ We are also going to include long-term investments, provided that they are of the same ilk as the short-term investments. In other words, corporate paper (debt), government bonds, and municipal notes that a company has purchased with its cash that have a longer maturity cycle than what counts as ‘short term’ will be treated as cash. Why? Simple exits. The investment is longer term, but that does not mean that it cannot be sold and converted directly into cash.

This treatment of cash as actual cash, combined with long and short-term investments, is the standard definition. By way of example, take the recent occurrence of Apple having more ‘cash’ than the US Federal government. This is how CNN framed the moment:

According to the latest statement from the U.S. Treasury, the government had an operating cash balance Wednesday of $73.8 billion. That’s still a lot of money, but it’s less than what Steve Jobs has lying around. Tech juggernaut Apple had a whopping $76.2 billion in cash and marketable securities at the end of June, according to its last earnings report.

Now that we have a working definition of corporate cash, what are the ten largest technology companies? We had to make decisions as to what counts as a ‘technology’ company, but we feel that you will agree with our selections. We decided to use market capitalization as the metric for determining size over employee counts (etc) as it is the most standard. In the list below, each company has its rank listed, its market capitalization noted, and its current cash hoard tallied. All market capitalization data is via Google Finance. Cash positions include a source link to the relevant corporate report.

These are the top ten largest technology companies in the world, ordered by their cash reserves:

We have taken the time to tot all those figures up, and this is what they sum to:

Impressive, no? Interestingly, the total cash position of the top ten companies in technology is roughly 20% of their total worth. Even more curious is the market capitalization to cash ratios that we find in the above chart, as they vary wildly. Apple sits at 4.33:1. Amazon, on the other end of the spectrum has a 12.86:1 ratio. Cisco wins the competition, however, with a 2.1:1 ratio.

How Much Is That, Really?

Let’s put the total figures into perspective, the fun that I promised to you a few minutes ago. The total net worth of the ten companies is greater than the annual GDPs of all but 11 countries, and Russia is just a pip above. That means that 170+ (depending on how you count) countries have a smaller GDP than the combined market value of the tip-top titans of tech.

The total cash position is even more fun. At roughly 291 billion dollars, the ten firms could buy the entire national production of any of roughly 150 countries. The sums that we have to treat with are simply hard to understand. Israel’s GDP, for example, is only 213 billion dollars. In fact, at a ratio of ‘revenue’ to worth of 7, Israel is worth only slightly more than these 10 companies.

Now, let’s go shopping. The top of the market iPad costs $829. These ten companies, without taking out a loan, could buy 3.5 x 10^8th of the gadgets, or in more common terms, 350,000,000. The companies could buy Pandora around 140 times, and LinkedIn 39 times. In cash. What else do people love? Cars. If the top ten tech companies pooled their cash they could buy 2,668,715 Tesla roadsters, a number that would probably put the car company into the black.

Much Ado About Cash

All of that aside, why did we undertake this exercise? To highlight a crucial fact: Technology companies are not finding places to invest their capital that they find to be superior than keeping it as cash. Not that Google’s acquisition of Motorola, and Microsoft’s purchase of Skype are not large moves, but combined they cost roughly 21 billion dollars, only 7.2% of the total cash on hand. They are, in a very strange way, small potatoes. What are the companies going to do with all that money?

It’s not a problem, but it is certainly a ‘situation.’ Apple, the company with the most cash, does not even pay a dividend. And it is hardly alone on the list for not doing so. If acquisitions do not become more compelling, and dividends remain a ‘non-tech-thing-to-do,’ where will all the cash go? Will it sit in corporate war chests designed to allow the tech world to live through any economic winter? Microsoft’s famous one-time $3 per share divided did little for its stock price long-term, so such drastic dispersals of cash are hardly likely.

All that cash is itchy, though, and it could lead to a spate of acquisitions or consolidations in the future on a level that would be terrifying. Almost three hundred billion in cash means that there is a, for all intents and purposes, unlimited amount purchasing power. We could be in for a wild ride.

We called cash oxygen at the start of this piece, and by that metric, the world of tech is O, all the way down.