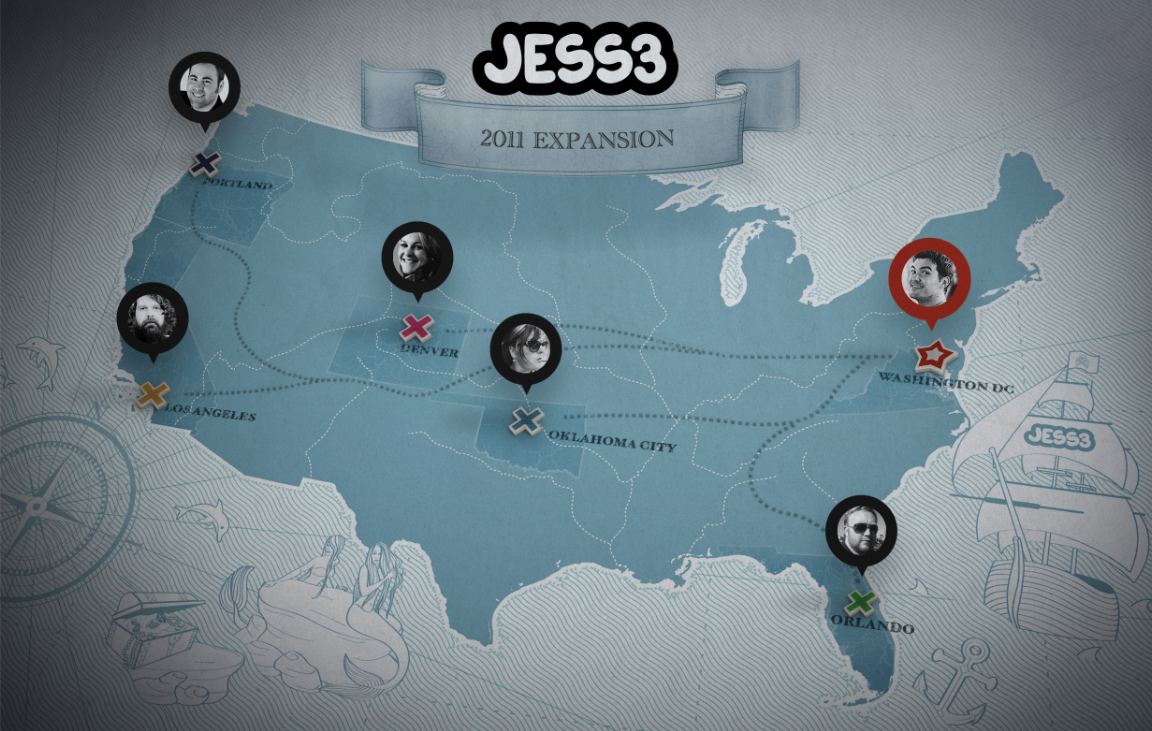 Looking back, it’s a bit hard to believe that it’s been a year since I first started talking to Jesse Thomas of JESS3. Facebook had just launched its Facebook Stories feature and Thomas’ company had been tapped for the design of the sub-site on Facebook.com

It was during this conversation, though, that I realized that JESS3 was onto something more than what I had seen before. We have a near-constant influx of infographics and data visualizations here at TNW but what we don’t always have are great stories behind them. As I would come to find out, it is the very fact of stories that has been the key to JESS3’s success.

There are a number of faces behind JESS3, but if you haven’t spent any time with Jesse or his COO Leslie Bradshaw then you haven’t really gotten to know this company and what they’re about. Going back to the beginning, though, Bradshaw tells me the story of how JESS3 came to be.

“Jesse tried to buy jesse.com almost 10 years ago. He had always had a web design and collage art portfolio and wanted to put it on the site. The domain wasn’t available so he flipped the E to a 3 and began freelancing while working at another creative agency.” Bradshaw tells me that the two met in 2006 via a mutual friend who knew that they both had an “insatiable interest” in the Web. “I realized within the first 10 minutes that he was a genius.” But, as is often the case, the creative ones are not always the best ones to run a business.

“He’s really creative. He’s so all over the place that I can’t imagine what it would be like to work with him as a client. He generally understood that these things [structure, planning and coordination of the business] needed to happen but he didn’t really understand how to do it.”

The two went to work, Bradshaw collaborating with Thomas on a part-time basis while still running her own career. “A lot of our business was based on his ability to design. Companies like AOL and Microsoft would bring him in to help with wire framing but we didn’t really have a seat at the table.” For creatives like Thomas, not having a seat was simply not enough.

“In late 2009 we decided that, if we’re really going to make a go at this, I have to work full time. In January of 2010 I became the first full time project manager. 2010 was the first full year that JESS3 was realizing its product vision and the power that what we were doing could have.”

What’s been interesting to me, from an outsider’s standpoint, is to watch JESS3’s transition from being a company that simply does data visualization to being one that is seen as a trusted guide and confidant when it comes to working with social media. I asked Bradshaw how a move like that happens.

“It’s kind of the yin and yang of what we’ve been as a company. Jesse is very conceptual and I’m very practical. He has the ideas and then I work to implement them. We’ve built credibility by working with companies that have trusted us in the past and then we can sit down with a client that trusts us and show them the things that Jesse sees.”

That credibility has been the driving force behind JESS3’s success as a brand. While most companies will choose to work with whomever is paying the right price, Bradshaw tells me that JESS3 has “a strong conviction in vetting these brands [that approach the company for work] and we’ve turned down work for brands that didn’t have great stories.”

So now that the company is established, the question becomes how to manage the scale of its operations. The first answer to that is to hire more people. Bradshaw tells me that, looking back, the company should have hired different, more seasoned people from the beginning and that was a mistake that has been fixed.

“We’ve had to go back and rebuild, especially in development. We don’t want to trade in a creative person for a seasoned person, but we also need them to be leaders. Hard work is simply not enough.”

The second step that Bradshaw notes, is in telling clients no. “You want to innovate and never say no, but now I can sleep well because everything I promise, we can deliver on. When we were trying to win clients, we would go so far as to personally fund projects just to do the things that they wanted done. Obviously, that’s not sustainable.”

So the team has hired and it has expanded. Most recently, it has opened up offices in 5 US cities this week, branching out from its home in Washington, DC to the new locations:

That fortification of its people and services should help propel the agency into the next level. But what is that next level? According to Bradshaw, it’s a matter of continuing on the same path because they know that the direction is right. The goal is to reach more clients, tell more great stories and to make JESS3 services available to more people and businesses.

The company’s success is a testament to determination, the vetting process and the understanding of what makes a great story. Its work? Living proof that a picture is worth a thousand words. As Bradshaw says, “make sure there’s a story.”