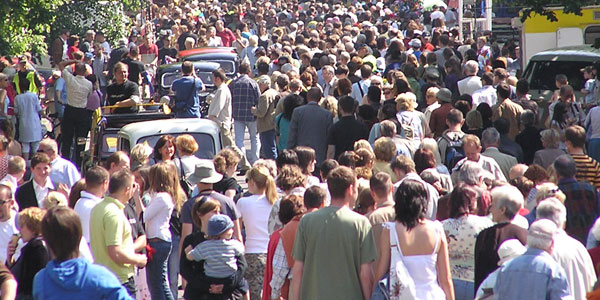 The past few weeks has put the attention of those of us in the tech world onto the evolution of social networks with the field test of Google+. We’ve been thinking about what it would take for Google to topple Facebook in this space: the immediate next steps in the social technology market.

But making predictions further out than the near future requires us to define what the ultimate goal for social technology is, and that’s something that’s very hard to do.

The differences between social sharing and traditional sending are subtle — they’re evolutionary, and it is the way they are perceived differently that is revolutionary. When you get down to it, the act of sending something by email to friends and having a discussion around it there isn’t that different to the way we share things on Facebook.

There are differences in how people are brought into the conversation in a more dynamic way and how the sharing itself is done, but really, what we’ve achieved is simply making the act of sending information back and forth easier.

Don’t get me wrong: that’s significant. But I think sometimes the technical difference between what we’ve always had and what we have now is not as big as it is often made out to be.

The biggest developments are yet to come. We’re starting to see them peeking through already, skirting the mainstream of social, but they’re not there yet and what we can see is only the tip of the iceberg.

It was amazing and revolutionary when the masses got their hands on email for the first time and could send things to their friends at any time, free of charge. But sharing experiences, while it sounds like a buzz phrase, is a whole different thing — and when I say it I’m talking about a specific technological capability, not some wishy-washy New Age rubbish.

We’ve been trying to wrangle this Internet thing to allow us to share an experience the way we can in real life. In real life, we can watch a movie together. Play poker and down a case of beer together. It can be as simple as sitting down to chat, sharing the same physical space — the atmosphere, food, music, all those things that add to an experience and make it stick out as something memorable.

How do we know this is what we’re headed towards? Let’s look at the evolution of social technology — but I won’t be discussing the origins of Myspace and Orkut and Friendster, but where the real social breakthroughs have been made.

Massively multiplayer online games have been around for longer than most people realize. They’ve been around longer than one of those early online multiplayer classics, Internet poker, even. They were called MUDs — multi-user dungeons — originally: like text adventures in a social setting for those who liked to role-play online.

Today’s MMOs are a different beast, and they’re some of the most popular gaming experiences on the market. People today game not just for the gameplay mechanics but for the social interactions they bring. Gamers consider those they play with regularly to be their friends and look forward to their next encounters with them the way they look forward to going to the movies with a real-life friend.

One of the inherently social aspects of their gameplay design is that the most difficult and rewarding challenges can only be overcome by groups. Not just any group, but a group that has worked together for long enough to work like a well-oiled machine that can predict the actions of the other players and react. Guilds spend days or weeks trying to defeat raid bosses, and when they do, there’s a feeling of elation that’s bonding, the kind only found in the real world amongst sporting teams who have heavily invested, emotionally, into their team and what they’re doing.

The raid encounter is a classic example of a shared experience: everyone doing their part to take down the boss, perhaps screaming at each other over Ventrilo when someone screaming screws up but forgetting it all in the elation that follows success.

And as an interesting but perhaps irrelevant sidenote, I wouldn’t be surprised if members of some guilds could tell who was speaking by voice alone better than real-life friends, who have the crutch of a face.

The Kinect is a fascinating piece of technology: the first widely available consumer technology that uses the human body as a control input. It has opened developers up to a world of possibilites that they could only dream about before, resulting in a huge wave of exciting Kinect hacks.

There are two reasons the Kinect is relevant. The lesser of these is the difference between having a Kinect video chat in your living room, instead of a regular webcam chat in your study. Talking to your friends and family from the living room is more appealing to people simply because that’s the venue they’re used to for social interactions. It feels more natural. The TV as the viewport is another element, because talking to someone through the comparatively small viewport of your desktop, laptop or phone isn’t as realistic.

It’s a small thing, but technology forces us to adapt to it, and this is a sign that engineers are working to make technology adapt to what we’re comfortable with.

That leads us into the main point, more important and more subtle. The Kinect is part of a movement in technology that is minimizing the presence of this thing called the computer, the technology that is both barrier and enabler between people, and emphasizing the humans on each side.

The computer will always be there, of course. It’s what makes it all possible. But things will change so that the user’s focus isn’t on the technology and its limitations — something you’re keenly aware of when browsing a social networking site. It will become the invisible facilitator.

Google+ Hangouts is yet another example of technology that is evolutionary in a technical sense but socially revolutionary. We’ve had consumer video conferencing through apps like Skype for years. The difference is the ability for known groups — family, friends, coworkers, whatever the hosting user decides — to drop in and out like a real-world hangout. Your local café or just your living room, for instance.

And that simple distinction adds so much to the experience. This isn’t a rigid thing, a communication between specific parties. It’s dynamic, the conversation and its participants can naturally evolve, and it works a lot more like the real world.

One of the big trends since the iPhone made it easy for developers to work with user location information has been connecting people in real life through their devices.

Apps that alert you when friends are nearby are commonplace, and all the major platforms have one horse or another in the location race. Facebook Places is perhaps one of the most popular among the late-adopting crowd of everyday people.

Even the guy who invented vapor cigarettes wants to get in on this action by having the cigarettes alert you when another user is nearby. It’s a bit of a weird idea, but that’s when you know a trend is afoot.

Virtual reality is ancient phrase that has a lot of baggage, like the ridiculous VR body suits of the 90s and the general stench of an idea that has remained intangible for too long. What’s harder to see in the midst of this evolution is that what we’re doing now, really, is shifting towards an online social reality that feels like an interaction in the physical world. The final destination of social technology is to create encounters that feel real, allowing friends to share the reality around them.

In the meantime, things are changing fast, even if those changes are in small increments. And people who say that the Internet and technology is making us more distant from each other and creating an anti-social society? I’ve never believed that, but if the development of things like Hangouts don’t make it easier than ever to call bullshit on that statement, I don’t know what will.

We can connect with more people than ever before. In the future, near or far, there will be few distinctions between sharing a physical space and sharing a virtual space when we connect with those people.

The naysayers have got it all wrong. The Internet was never something that kept humans apart. That has always been the role of geography. With social technology, we have and we are defeating geography.