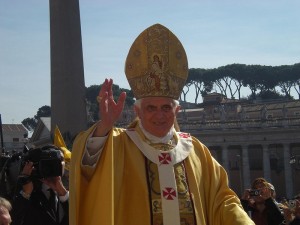 As we just reported, Twitter CEO Evan Williams just announced that the Twitter API will include “Places of Interest”, i.e. establishments such as restaurants and bars, as well as other locations such as parks.

Our first thought is that this is a direct challenge to established check-in services, because if Twitter now offers Places, then logically services can then build Twitter check-in apps or functionality. However, when asked after his talk, Williams said: “We’re not looking to duplicate what Foursquare or Gowalla is doing.”

Williams also mentioned he hopes that this new feature will be used to compliment existing check-in services, but really, as we’ve mentioned before, as location is so in Twitter’s DNA, this is an obvious move to pull in Foursquare/Gowalla like functionality directly into Twitter only focused apps. Also, this is a bit of a coup for Twitter to announce this the week before Facebook’s f8 conference, where a lot of the buzz has been around what the leading social network will announce around location.

We see this a smart move for Twitter. Foursquare’s API is just starting to gain some traction with developers (for instance, Kickball is a Foursquare iPhone client based on the API, and coincidentally, Twitter’s GeoAPI service as well). By adding these places of interest into the existing API calls of neighborhoods and lat/long, Twitter will be offering a great mix of geo options for developers to further integrate location into their Twitter apps. Also, as the number of geo tagged tweets is still presumably very low (Williams mentioned in his keynote that they will possibly reveal some of those numbers later in the day), this new feature could help to jump start the use of location by Twitter users, many of whom have never used Foursquare or Gowalla (simply based on the fact that neither has 1 million users and Twitter just announced that they have over 100 million accounts).

Williams mentioned that Twitter’s Ryan Sarver will speak later about how the functionality will work in the API, and we will update then. For more insight into Twitter’s geo plans, see our recent interview with Twitter’s head of geo, Othman Lakari.

Read next: A cool search engine for podcasts - DoubleTwist