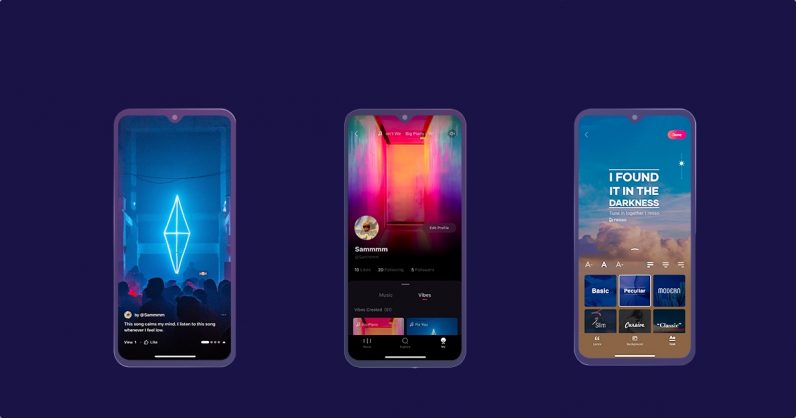 TikTok‘s owner, Bytedance, has launched its own music app, called Resso, in India. While the app features TikTok‘s swipe-to-skip interface for songs, Ressso looks to keep its distance from the popular short video app, and create a new identity.

The Chinese tech giant began testing Resso in India and Indonesia in December. Resso is banking on its social features, such as lyrics sharing posters, to gain popularity with the country’s music-loving junta.

The app’s free to download on both iOS and Android. However, if you choose to use the free tier of the app, you’ll have to see ads and stream music at a lower bitrate of 128 kbps.

Ponying up for the premium tier will remove ads, and unlock song downloads, as well as streaming at a higher bitrate of 256kbps. The subscription costs ₹99 for Android users and ₹119 for iOS users. The company didn’t answer why the prices are different on these platforms; it may have something to do with the margins that Google and Apple charge for mobile services in their stores. However, the fees are comparable to other streaming platforms in India.

To differentiate itself from existing music apps, the platform allows you to upload six-second pre-recorded videos called “Vibes” that would play on the background of a song. Plus, you can comment on these songs, just like YouTube videos. Resso said it has an in-house moderation team that keeps a close check on Vibes and comments.

Right now, there’s no way to turn off vibes. And watching a few six-second videos playing on a loop gets annoying after a while. Hari Nair, Head of Music Content and Partnership, Resso India, argued that this is to make your music listening experience more engaging than before.

Resso also allows people to select lyrics of a song and turn it into a poster to share it on other social media platforms. For me, rolling lyrics on the screen is the best feature of the app. Last month, Spotify also rolled out a similar feature that shows synced lyrics.

One of the big talking points for music streaming apps has always been the size of their library in terms of millions of songs. While the company didn’t specify any number, it said it has signed with major records labels in India.

Nair, a former Sony BMG executive, said it has signed up with 95% of India’s regional labels which serve up catalogs in local languages,, and it’s also working to get more indie artists on board. He added that Resso signed a deal with Warner Music — a label that’s missing from Spotify India’ library — during the beta period.

As we noted in our story last month, India has 200 million unique users on these music streaming platforms — much less than the country’s tally of 627 million internet users. However, Resso shouldn’t expect many paid subscribers, as India’s leading music streaming app, Gaana has less than only 2 million paying customers, out of its 150 million users.

Despite Bytedance’s power and money behind it, Resso won’t have an easy in the Indian streaming industry. There are local competitors such as Gaana and JioSaavn, and global players such as Spotify, YouTube Music, and Apple Music already fighting it out in a tight space. We’ll have to wait and see if Resso’s swipe-to-skip UI and lyrics posters can make it the first choice of music listeners in India.