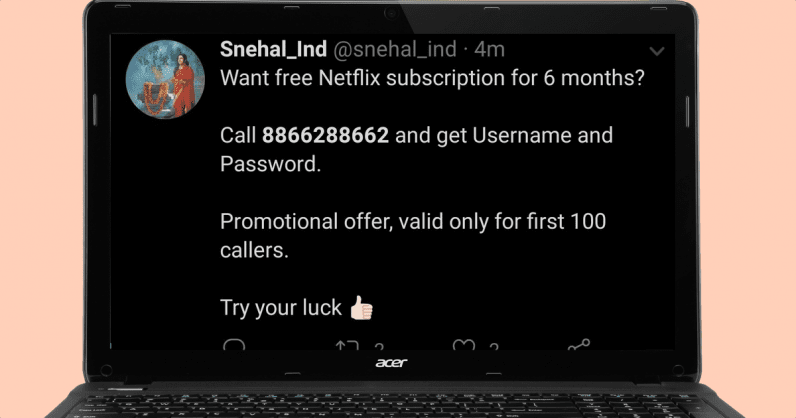 Update (07/01/2020):  BJP President Amit Shah said today the toll-free number to register support for the upcoming law received over five million calls. However, there’s no mention if all these numbers were unique. So, we can’t really say more than five million people are in favor of the law. To put things into context, the party has over 180 million registered members. Comparatively, the campaign has fallen flat.

Last week, leaders of the ruling Bhartiya Janta Party (BJP)  of India tweeted out a toll-free number for people to call and show their support for the upcoming Citizenship Amendment Act (CAA). However, later, several accounts – allegedly directed by the BJP – tweeted the same number, offering free Netflix subscriptions and hotlines to chat with ‘lonely women.’

For the uninitiated, CAA is an upcoming law that grants citizenship to non-Muslim refugees from select neighboring countries. Clubbed with the proposed National Register of Citizens (NRC), it poses a threat to minorities in the country.

The introduction of this law has led to several protests across the nation opposing it, as well as internet shutdowns, and masked goon-led violence in universities.

In what appears to be yet another such campaign, multiple Twitter users posted the number to support the law masqueraded in tweets offering free data, jobs, ‘friendly chats,’ and Netflix subscriptions. Netflix India‘s Twitter account was swift to debunk rumors of any such scheme.

This is absolutely fake. If you want free Netflix please use someone else's account like the rest of us. https://t.co/PHhwdA3sEI

The story of CAA support, in four pictures… pic.twitter.com/ueLNmqDRr8

The method of how these campaigns are organized is quite simple. A shared document with template text for tweets is circulated among these influencers, who post said text on Twitter. Last year, fact-checking website Altnews’ founder, Pratik Sinha, showed how easy it is to manipulate this document and get people to tweet in your favor.

This shows how easy it is to create misinformation in developing countries like India without the assistance of any advanced technologies such as deepfakes or AI. We’ve sent an email to BJP for a comment, and we’ll update the story if we hear back.

Read next: Samsung unveils a bezel-less 8K TV and a rotating TV at CES