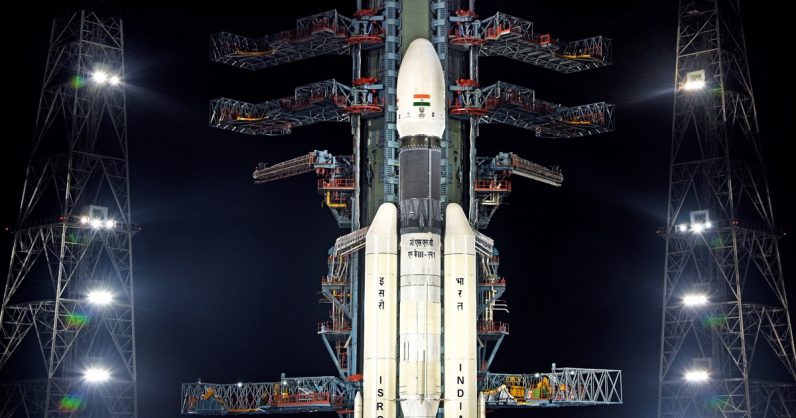 Chandrayaan 2 is ready to take a billion dreams to the Moon — now stronger than ever before! Join us for the launch on Monday — 22 July, 2019 — at 2:43 PM IST.
#Chandrayaan2 #GSLVMkIII #ISRO pic.twitter.com/4ybFcHNkq6

After the scintillating finals of Wimbledon and the Cricket World Cup over the weekend, people watching at home were eagerly waiting for the next spectacle – India‘s Chandrayaan-2 launch. However, they will have to wait at least a few more days, as the country’s space agency, ISRO, has delayed the launch due to a “technical snag.”

The launch was originally slotted for 15 July 2.51 AM IST (5 PM ET) from Sri Harikota Space Centre in India. The Chandrayaan-2 was headed for the moon and was supposed to land on the surface on September 6.

But officials from the Indian Space Research Organization called off the launch just 56 minutes before the lift-off when they found an issue during a routine check on the rocket. The team decided to take “abundant precaution” and delay the launch. ISRO officials told IANS they found the impediment when cryogenic fuel was being loaded in the rocket. The agency hasn’t provided any other details regarding the decision.

A technical snag was observed in launch vehicle system at 1 hour before the launch. As a measure of abundant precaution, #Chandrayaan2 launch has been called off for today. Revised launch date will be announced later.

While ISRO promised to announce the new launch date soon, it’s worth noting the current launch window expires on July 16 (tomorrow). That’s not a lot of time to fix a major issue with the launch vehicle, and so it’s likely that the Chandrayaan-2 will take off only during September when the next window opens up.

The space agency is being extremely careful about the mission it’s already spent Rs. 1,000 crores ($145.9 million) on. Chandryaan-2 is India‘s second moon mission after the Chandrayaan-1 – an orbiter that was launched in 2009. With this new mission, India hopes to become only the fourth country after USA, Russia, and China to soft-land a rover on the moon. For now, we’ll have to wait at least a few more months to see if the country can join the exclusive club.

Read next: PRIME CHEAP: A 4K Fire TV Stick For $25? This must be a mistake