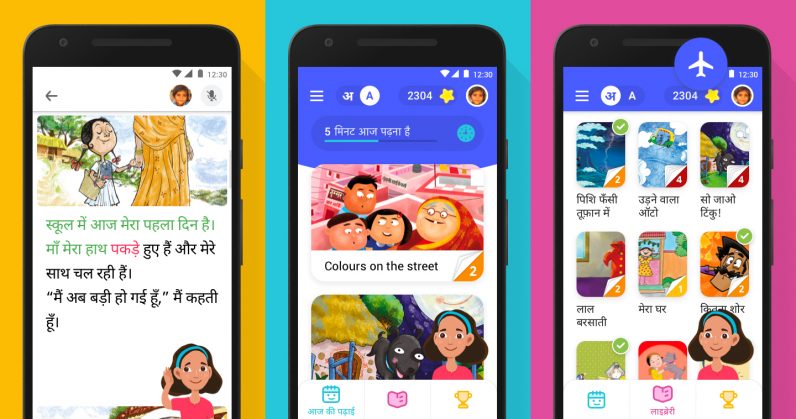 Google just released a new Android app called Bolo (‘speak’ in Hindi) that’s designed to help children learn Hindi and English. It works completely offline, making it ideal for use in rural areas with poor mobile connectivity, and comes with a friendly voice assistant to guide kids through the included lessons aimed at primary grade students.

The app, which is presented in Hindi, features several stories in both languages suitable for different reading levels. With the help of Diya, the virtual assistant, kids can learn to read by repeating the sentences she reads aloud. If a child finds a word difficult to pronounce, Diya automatically detects that and helps them out before proceeding with the rest of the story.

Plus, when kids are learning English, Diya helps them with the pronunciation and the meaning of the word in Hindi. That’s a nice feature for children whose native language is not English.

Google described Bolo as its latest philanthropic effort aimed at people in India. To that end, it’s not looking to monetize the app in any way; it doesn’t gather any personal data either, and is completely safe for children to use without having to worry about their privacy being invaded. Bolo already has 50 stories in Hindi and 40 in English, and a bunch of word games to boot; the company said it’s working to add more content and support more Indic languages in the app soon.

A study released by the nonprofit Annual Status of Education Report (ASER) Center last year stated that only 44 percent of children studying in grade five are capable of reading books meant for students in grade two. Through its pilot program with nearly 1,000 children, Google said it observed 64 percent of children having shown improvement in their reading skills after using Bolo. Now, with the wider release of the app, the company’s aiming to reach more children across India.

You can learn more about the app here, and download the app from here.

Read next: QuadrigaCX granted another extension to find lost $134M in cryptocurrency