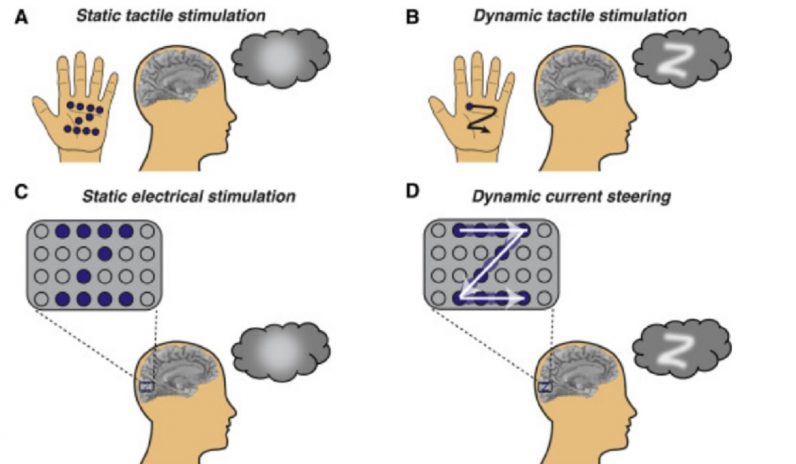 A team of researchers from UCLA and Baylor have developed a method for drawing symbols – including letter and shapes – directly on the human brain using electrical stimulation. The result allows individuals who’ve entirely lost their sense of vision to perceive the shapes as “sights.”

The new process bypasses the human eye and the optic nerve and uses electricity to stimulate implanted electrodes at the visual cortex, located in the back of the brain. It works through dynamic stimulation, meaning instead of sending stimulation in the shape of a completely formed letter, the researchers trace the letter directly on the brain in real-time.

[Read: Opinion: Facebook’s brain computer interface will be the instrument of society’s collapse]

The following video is from a report in Science News, it shows a user receiving inputs via their brain implant and then correctly interpreting what they see by drawing it on a screen in front of them:

Basically, it’s the same principal as writing a note on your friend’s back with your finger. Your pall can tell what your’e writing as you form each letter because they can follow the unfolding process. Instead of forcing all the electrodes to send information in the shape of, for example, a letter U all at once, the system lights up the electrodes sequentially so the recipient can easily determine the shape being conveyed.

The researchers tested their system on two blind subjects and four seeing people who already had brain implants as part of treatment for epilepsy. The results were astounding. Under different paradigms, participants regularly perceived the proper shape in their minds with between 80 and 93 percent accuracy.

Perhaps even more astounding, participants managed to correctly report up to 86 correct answers per minute. This level of rapid information delivery could lead to a complete revolution in accessibility for the visually impaired.

Imagine connected sensors in public spaces that could alert the visually impaired to everything from when it’s safe to cross the street to which way the produce aisle is in a grocery store using nothing but the power of electrical suggestion. While the researchers have only tested simple shapes such as the letter C and Z, there’s plenty that can be done with just numbers, letters, and arrows.

For the time being, this tech is stuck in the experimental stage. The need for invasive implants makes it less than optimal for treating visual impairment in its current iteration. But it’s a fascinating step in the right direction.

For more information check out the team’s research paper here.

Read next: The Pixel 4a might be cheaper than anyone expected