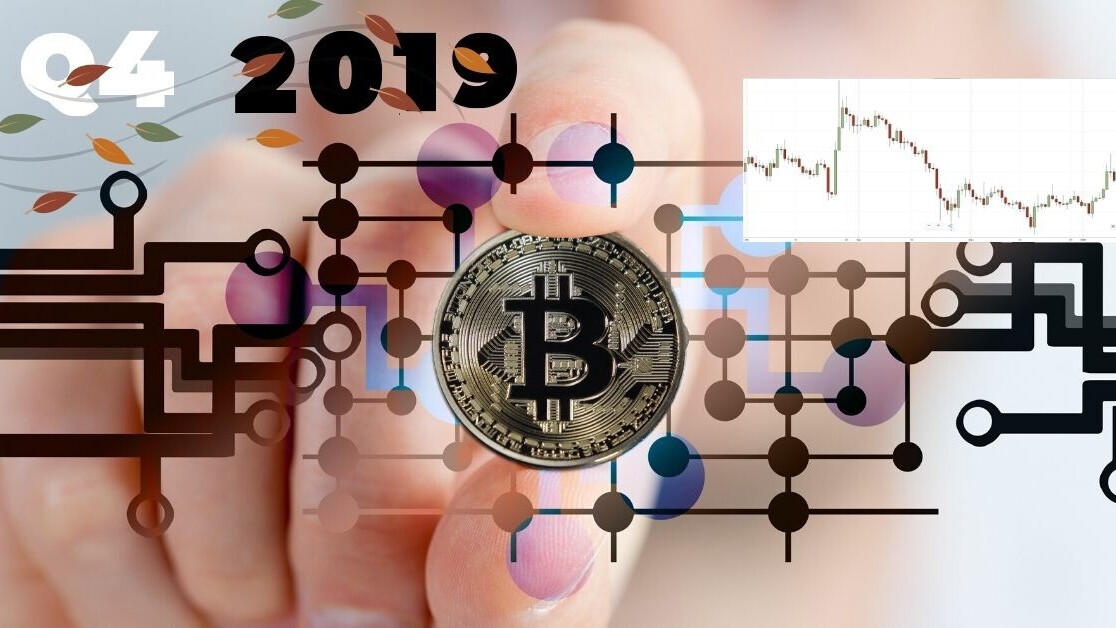 Despite common fluctuations in price, Bitcoin‘s performance throughout 2019 was somewhat unremarkable.

We’ve taken a closer look at the cryptocurrency‘s price movements, focusing specifically on its performance during Q4 2019.

But, first, let’s briefly recap Bitcoin‘s performance during the first nine months of the year.

Bitcoin BTC was relatively stable from January to March 2019.

It started the year off at $3,717 and a brief 9-percent increase in its trading price saw it surpass the $4,000 barrier during the first week of January.

The upward trend was short-lived, though. Within a month, its price fell to a low of $3,358 on February 7.

From then on, Bitcoin demonstrated some relative stability but experienced a notable drop at the end of February where its trading value dropped 8 percent from $4,106 ⁠— its highest price during Q1 ⁠— to $3,784 over a 24-hour period.

By March, Bitcoin had almost equaled its quarter high and closed trading at $4,092, representing a modest 10-percent growth for the quarter.

The second quarter of 2019 proved to be much more fruitful for investors and hodlers.

Bitcoin opened April at $4,125 — marking the start of a three-month-long rally.

Over Q2, Bitcoin set numerous records for reaching prices that hadn’t been seen over the previous 12 months.

October saw Bitcoin trade at prices unseen since the previous month of June.

The biggest drop happened October 24, when the cryptocurrency plummeted to $7421.20.

Three days later, on October 27, Bitcoin would gain momentum to reach both the month’s and quarter‘s high at $9595.34.

Bitcoin remained relatively stable during the first few days of November 2019, maintaining around and above the $9,100 mark.

It then finished the month on December 31 hovering at just over $7,100.

Bitcoin’s price was definitely higher during Q4 2019 than in Q3 the previous year.

The cryptocurrency‘s performance followed the same line throughout the following month. It peaked momentarily during the first week of November going slightly above $6,500 before plummeting by more than $1,000 and sitting just above $5,500 on November 18.

Bitcoin continued to drop finishing the month well below $4,000.

At the beginning of December 2018, Bitcoin was hovering close to $4,200 and remained below the $4,000 throughout the rest of the month.

In early October, Russia reportedly enacted a new “digital rights act” that defines smart contracts and cryptocurrency tokens. Although the country is yet to fully embrace cryptocurrency, this was largely perceived as a step toward potentially regulating the space.

Ohio, the first US state to accept Bitcoin for taxes, suspended its cryptocurrency payment system meaning businesses can no longer pay in digital assets.

Europol said Bitcoin was still very much the dark web‘s favorite cryptocurrency but noted that those looking to cover their tracks were slowly learning to use privacy-focused alternatives.

Bitcoin-hungry hackers gave the city of Johannesburg three days to pay more than $30,000 worth of the cryptocurrency.

It’s never easy to predict Bitcoin‘s price movements, but the cryptocurrency has been moving upwards so far this year.

Having landed January above the $7,100 mark, Bitcoin has remained relatively stable, maintaining itself mostly above $7,000 but well below $8,500.

While these values are not necessarily encouraging — especially if we look back to January 2018, when one coin was priced at well over $13,343.71 — they’re a significant improvement when compared to Bitcoin‘s lowly price of $3,000-$4,000 this time last year.