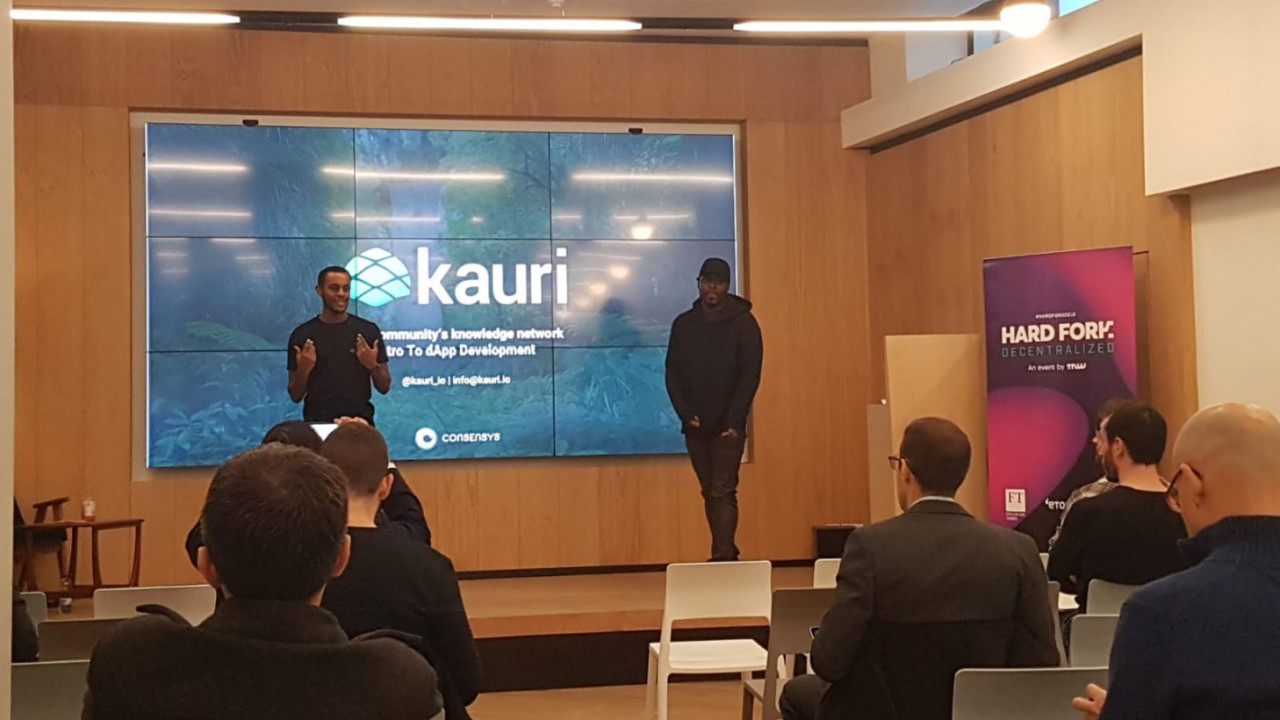 This morning, developers from blockchain technology services firm ConsenSys and Kauri took to the Hard Fork Decentralized stage to show attendees how to create their first Ethereum-based dApp.

Kauri is one of ConsenSys’ supported blockchain startups. Through creating a “global knowledge ecosystem,” Kauri is trying to help fledgling Ethereum developers find their feet when coding smart contracts for the Ethereum blockchain.

Essentially, Kauri uses the blockchain to help connect coders to blockchain dev resources that are useful when developing a smart contract.

Joshua Cassidy took participants through the Kauri Remix IDE system, a web-based integrated development environment for dApps and smart contracts. Remix IDE comes with all the relevant coding libraries to support coding smart contracts in Solidity, one of the preferred programming languages for blockchain-based applications. It also allows the smart contract to be compiled and tested as you work.

I’m not going to lie, I am not a coder. Still, I followed along with the demonstration and got reasonably far before the nuances of programming got the better of me.

Hard Fork spoke to one of the participants, Omamerhi Etefia, to see how they got on. Omamerhi admitted that her previous coding experience was limited, but this didn’t seem to prevent her from getting to grips with how to build an Ethereum smart contract.

Omamerhi is currently in the process of completing her degree at King’s University, and in her spare time is learning how to code and researching ways in which to bring the ‘decentralization’ of blockchain to the student and graduate recruitment sphere.

Using Remix IDE did make the process of building a smart contract more approachable, Omamerhi told Hard Fork, but she feels she still has a long way to go before she’ll be able to write fully deployable smart contracts for her platform.

There’s clearly a learning curve here. Of course it’s unrealistic for a non-programmer like myself to expect to pick this up in a morning, but there’s perhaps a greater issue we should be aware of.

Omamerhi went on to tell Hard Fork that if blockchain is to truly live up to its claim of decentralization and giving power to the people, that “we the people, have to learn to code.” Omamerhi continued, “I could give my idea to someone else, but I won’t have control of the vision, so I have to learn.”

Even if Kauri is trying to fill a skills gap, some people, like myself are still in the dark. One of blockchain‘s promises is that it can give power back to individuals, but it seems in the case of smart contracts, it gives a sizeable portion of that power to coders and programmers first.

If blockchain is ever going to liberate society, something needs to change or we’re all going to have to learn to code.