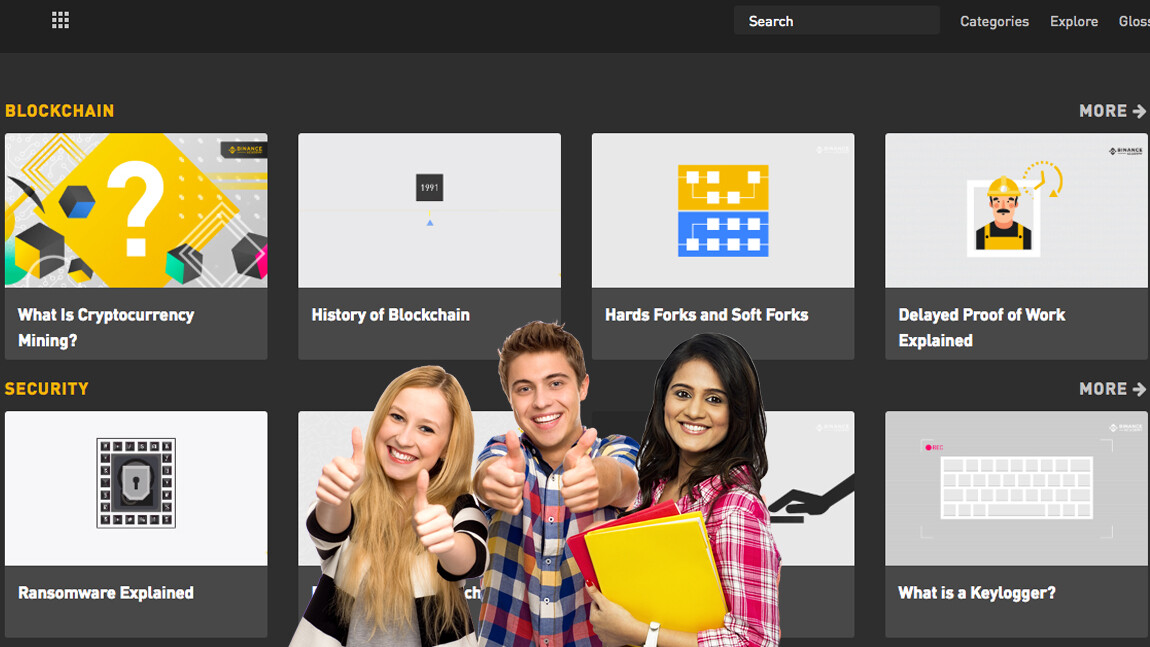 Exchange desk Binance wants to introduce you to the basics of cryptocurrency and blockchain with its latest offering. The company has launched its own education platform to help users get more familiar with the technology.

The new undertaking, called Binance Academy, features a wide array of explainer pieces. It is also available in 15 different languages, including French, German, Spanish, Russian, and Chinese. You’ll find information on fundamental concepts like the “history of blockchain” and mining.

The Binance Academy is currently divided into four broad categories: blockchain, economy, security, and tutorials. It also has a separate ‘glossary’ segment, for those that want to catch up on the most common terms used in the space.

Another good thing is that Binance has also included a page where visitors can suggest topics for future explainers.

Overall, the Academy seems like a good jump-off point for newbies, but seasoned cryptocurrency vets won’t find much they didn’t already know.

Binance and the blockchain ecosystem

The educational platform is the latest in a series of side projects recently launched by Binance. The company launched a $1 billion fund to support the growth of startups in the blockchain industry back in June.

The Academy has technically been set up as a nonprofit, so Binance is likely hoping the platform can attract new customers to its cryptocurrency exchange.

For the record, Binance is hardly the only company seeking to leverage “education” for brand recognition. Coinbase launched a similar discovery board, where people can easily browse and learn about various cryptocurrency assets – and invest in them. Unlike Binance, Coinbase’s platform is a little more blatantly aimed at luring in new users though.

With such high risks associated with cryptocurrency trading and investing, it is no surprise that exchange services are trying to educate users about the basic tenets of the technology. Still, it’s important to remember that such efforts are also intended to work as a marketing strategy.

So your best bet might be to stick to the hackneyed adage: do your own research.