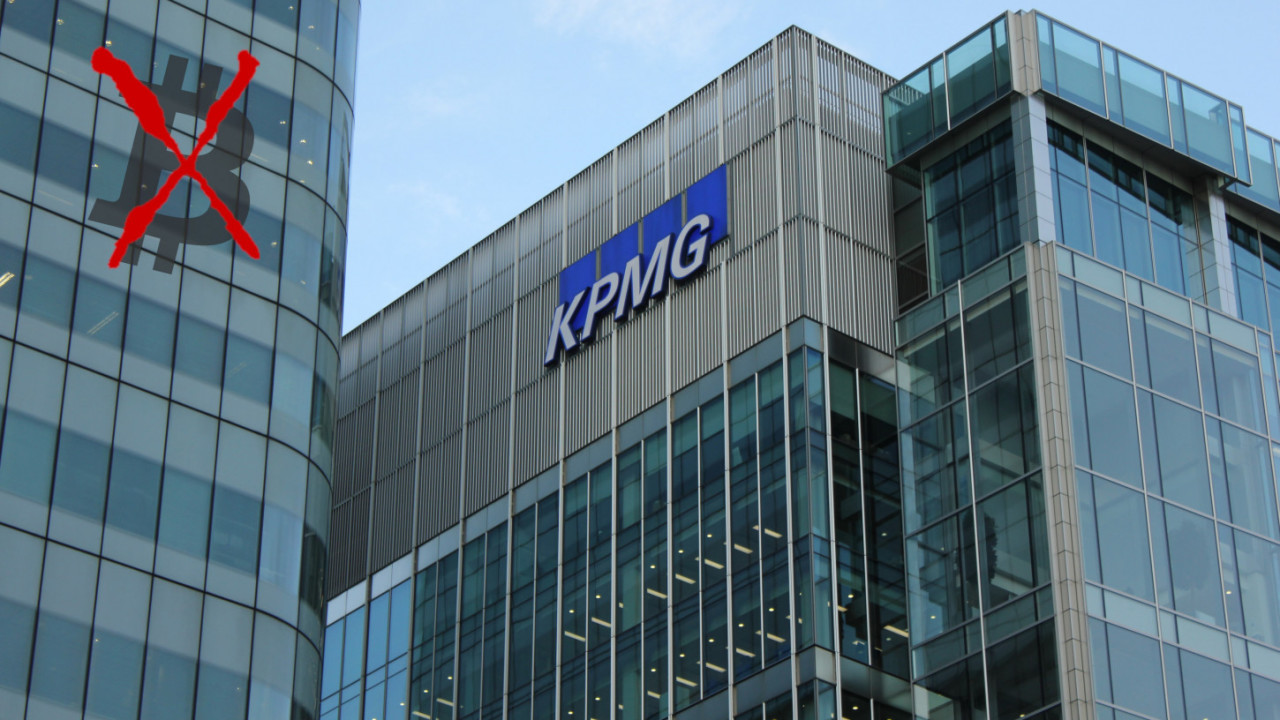 ‘Big four’ accounting firm KPMG has just asserted that cryptocurrency assets, like Bitcoin, BTC are simply not ready to be classified as real currencies – and that using Bitcoin as a store of value is a “fool’s errand.”

In a new report, KPMG details the challenges facing the cryptocurrency industry, as it seeks adoption by the world’s largest financial institutions.

Ultimately, KPMG posits that if cryptocurrency related assets have any hopes of truly flourishing, they simply must undergo what it calls ‘institutionalization.’

The firm defines institutionalization as the at-scale participation in the cryptocurrency market of banks, broker dealers, exchanges, payment providers, fintech companies, and other entities in the global financial services ecosystem.

“We believe this is a necessary next step for crypto to create trust and scale,” KPMG declares.

Of course, it is hardly surprising that KPMG – a company which generated $26 billion in revenue in 2017 – would hold this view. But do its arguments hold any water? Let’s dig into the report.

KPMG says Bitcoin is not a currency – yet

According to KPMG chief economist Constance Hunter, in order for a cryptocurrencies like Bitcoin to be candidates for institutionalization, they must first meet the traditional definition of a currency.

For that, a cryptocurrency asset must meet three criteria: it can be used as a unit of account, a store of value, and a unit of exchange.

The first test is easy, as cryptocurrencies are made up of identical, yet individual units of account, meant to be measured as such. For example, there are 21 million Bitcoin to ever exist – and you can account for every single one using the blockchain.

Although, as a store of value, Hunter considers cryptocurrencies to be far too unstable, especially when mapped to traditional functions of finance like borrowing.

“Consider for a moment extending a person or entity a loan in a cryptocurrency,” writes Hunter. “The value is too unstable at the moment to be assured repayment. Under these conditions, neither lenders nor borrowers would be willing to take the risk of transacting in cryptocurrencies.”

To Hunter, the act of borrowing or lending in a cryptocurrency like Bitcoin (one that risks significant devaluation) would be a “fool’s errand.” This makes cryptocurrency assets, in their current form, simply too volatile to be considered a legitimate store of value, or even an effective method of exchange.

Friction is how currencies become real

Cryptocurrency assets usually aspire to be usable currencies within the general economy, and to certain extent, Bitcoin has achieved that already.

Despite the current rates of adoption, Hunter claims that currencies only become legitimate when they find “friction” to reduce within the world economy, a fancy finance term for a solid use-case.

For example, when the Euro was first introduced within the European Union immediately simplified trade between members.

Similarly, the US dollar acts as the world’s reserve currency, removing the hassle of exchanging between fiat currencies when conducting international commodities trade.

Both are instances of a currency increasing its adoption by alleviating friction in the financial system. When Bitcoin (or any other cryptocurrency asset) can achieve this, then the institutionalization can begin.

Hunter concedes it is certainly possible to find the friction within the global financial system for a cryptocurrency asset to alleviate. The global payments market is a solid candidate, as individuals currently pay high fees to transact.

“If a crypto could achieve enough stability of value to be used for this purpose, it could eliminate the need to have bank accounts in multiple countries and could allow individuals to transfer money to anyone without paying wire fees,” says Hunter. “If a fully equipped crypto that has a stable value becomes easier and less expensive to transact than a government-issued fiat currency, it could be an innovation that becomes ubiquitous in the global financial services system.”

It’s all about trust

The larger KPMG report outlines major barriers for facing cryptocurrencies before being institutionalized. Most of them relate adhering to regulatory obligations and keeping up-to-date financial records, which in turn makes the greater finance industry more comfortable with dealing with crypto-assets.

So, to pander to the fatcats, KPMG suggests those who are launching crypto-assets with intent to be adopted by the traditional finance industry should impose strict Know-Your-Customer (KYC) and Anti-Money-Laundering rules on customers and the digital assets they trade.

This includes making use of services that specialize in proving the provenance of digital assets, which can help alleviate concerns of being exposed to illegal activity like money laundering.

It is yet to be seen if any of these measures have helped spur adoption.

Exchange operators and other fintech businesses also need to define clear tax guidelines for investors related to the various kinds of crypto-assets they offer, and must be wary of the rules and regulations surrounding the exchange of crypto-assets classified as securities.

This includes setting protocol for when blockchains undergo hard forks and split into two separate cryptocurrencies, as this presents taxable events that have greater implications for the future of the underlying digital asset being forked.

KPMG’s guide to the institutionalization of cryptocurrencies may very well be handy for the digital assets vying for adoption by the traditional finance world.

However, if Bitcoin’s identity as a real currency relies on being adopted by the very financial system it was built to rebuke, I think we may have found the true fool’s errand.