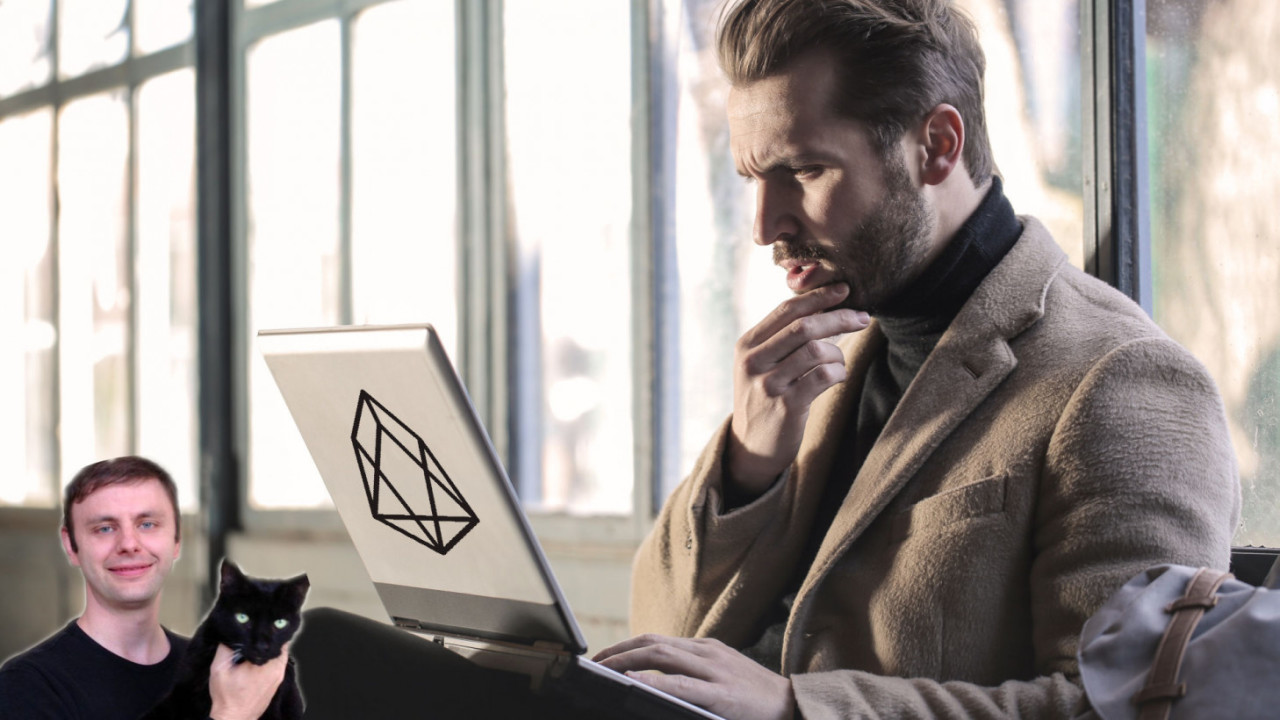 A blockchain testing company claims it has found something quite shocking: EOS, EOS a blockchain protocol that was worth $4 billion a few months ago, may not actually be a blockchain.

In a new experiment, benchmarking firm Whiteblock concluded that the EOS token (and its RAM market) is essentially a cloud service for computation – and is built on an entirely centralized premise. As such, it lacks some of blockchain’s most fundamental aspects, like immutability.

“Through practical testing and experiments in a controlled laboratory setting, this research provides a thorough and objective model of [EOS’] design, performance, and economics in order to present a reference for the blockchain community,” declares the paper, which Whiteblock shared directly with Hard Fork.

Whiteblock built a replica of EOS to destroy

EOS differs from Ethereum and Bitcoin in lots of ways, but especially in how it decides who should be the ones to validate blocks and reap the rewards for doing so.

Unlike Proof-of-Work blockchains, which allow anyone to contribute to powering the network, EOS selects who should process transactions (block producers) through a complicated voting process called Delegated Proof-of-Stake.

During these elections, each EOS token held equates to one vote, meaning that those who hold lots of EOS have more say in who controls the network.

So, to conduct this experiment, Whiteblock ran a replica of EOS which it claims works the very same way as the real thing.

“It runs the exact same software. The block producers within the Whiteblock environment perform the same functions a block producer would perform in the main net,” Zak Cole, Whiteblock’s chief technology officer told Hard Fork. “We provision nodes within a controlled test environment, configure the network conditions between these nodes in order to emulate real-world performance, and automate their process and actions so we can observe their behavior and measure their performance in a deterministic manner.”

Whiteblock initially began testing their copy of the EOS blockchain in September. The tests took place in an isolated environment and continued for two months.

The firm describes EOS as more of a network that provides promises for computational resources, stored in a “blackbox,” for users to access. Even more damning, it says the entire EOS system is built on a flawed, centralized model.

“EOS is not a blockchain, rather a distributed homogeneous database management system, a clear distinction in that their transactions are not cryptographically validated,” Whiteblock argues. “EOS block producers are highly centralized and users can only access the network using block producers as intermediaries. Block producers are a single point of failure for the entire system.”

EOS is not exactly fast and could be controlled by cartels

A large chunk of the paper is dedicated to proving there is no proper protocol for preventing block producers from colluding to maintain their role as block producers, with little protection against bad actors forming cartels to crash the entire network.

As such, the report indicates EOS suffers from consensus failures with no Byzantine Fault Tolerance (BFT), leaving the network open to being controlled by rogue, colluding members.

For a blockchain to have BFT, the network must be able to withstand system failures that result from situations related to a mathematical puzzle called the Byzantine Generals’ Problem. If it cannot, bad actors are theoretically able to process false transactions, so BFT relates to the reliability of a blockchain.

“Conceptually, it is impossible for EOS to implement Byzantine Fault Tolerance. A true BFT system would not be susceptible to cartels forming in the system, [but] […] cartels are easily formed in EOS, therefore negating any effort to claim BFT.”

In particular, the researchers note the primary threat to EOS’ integrity is the Sybil attack, which involves bad actors muscling other network contributors out of being able to process transactions altogether by creating fake identities, and using them to initiate spam and DDoS attacks.

“This is in fact a large vulnerability in the system as fraudulent users are essentially able to create malicious accounts much faster than the block producers are able to come to consensus [on which accounts to exclude],” Whiteblock warns. “This further proves the high level of centralization that exists in the EOS network and the tremendous power these block producers possess.”

The report then states that block producers do not actually process transactions based on any consensus algorithm, instead confirming transactions in a “mechanical fashion,” with no formal verification of the validity of transactions being processed.

To which effect, Whiteblock’s benchmarks revealed that the amount of transactions able to be processed by EOS is significantly lower than initially claimed in marketing materials, never exceeding 250 transactions per second (TPS), even with optimal settings like zero latency and packet loss.

It must be mentioned that other testers have previously benchmarked the speed of the EOS network. The general belief is that the current maximum throughput of EOS is around 4,000 TPS.

The EOS whitepaper declares it perfectly possible that EOS would one day scale to process millions of transactions per second.

“During tests with real world conditions of 50 [milliseconds] of round trip latency and 0.01 percent packet loss, performance dropped below 50 TPS, putting the system in close proximity to the performance that exists in Ethereum,” Whiteblock claims.

Bitcoin is currently capable of processing up to 7 TPS, and Ethereum can process around 20.

According to Cole, EOS stores all data related to transactions in a kind of table designed by lead EOS brain Dan Larimer, called a Chainbase.

When EOS network confirms transactions, Whiteblock claims block producers are simply cross-referencing new transactional data against this table, rather than confirming their legitimacy with cryptography.

The firm says EOS transactions only happen due to block producers updating the data stored in the underlying Chainbase, rather than cryptographically verified changes to the state of the underlying blockchain, as is the case with Ethereum.

“All of these actions operate in an environment that lacks cryptographic validation of the contracts and transactions,” says the research. “EOS is fundamentally the same as a centralized cloud computing architecture [client/server] without the fundamental components of a blockchain or peer-to-peer network.”

Having network participants validate transactions by checking a special table has consequences. Not only is it unusual for a cryptocurrency, it affords developers practically infinite amounts of “undos,” meaning EOS transactions can be reversed by those with access (such as block producers).

Indeed, there have already been cases of reversed transactions and frozen EOS accounts.

“The ability to undo history (or anything for that matter) related to state is a notion that directly conflicts with the essential definition of what can be considered a blockchain, which is characterized by immutability of data,” Cole concluded.

Except it does, just differently

Hard Fork reached out to many EOS block producers for comment. At print time, most representatives declined to comment, noting they are awaiting the publication of the full report.

One source, an EOS dApp developer, did say that Whiteblock’s interpretation of how EOS validates transactions was particularly “weird.”

The source explained that Chainbase is just a method of storing real-time information, as is the case with folders or files. In this instance, EOS stores data pertaining to transactions in a Chainbase, which it places in a central location (similar to a Bitcoin full node).

Block producers then validate the transactions using cryptography, writing confirmed transactions into a blockchain as part of the process.

Chainbases are really meant to optimize EOS performance, as they allow EOS to store data in RAM, which it then uses to produce blocks quickly.

This would suggest that EOS is actually using cryptography after all, contradicting Whiteblock’s conclusions.

A look behind the curtain

It should be pointed out that ConsenSys, which commissioned Whiteblock, is heavily invested in the Ethereum blockchain ecosystem, the primary competitor to EOS. It describes itself as a “venture production studio” that focuses on the development of Ethereum-powered platforms.

And if this whole thing is not strange enough – EOS was actually borne on the Ethereum blockchain, starting out as an ERC-20 token.

But after Block.one launched the EOS mainnet in June to become its own blockchain, many Ethereum tokens have since made the switch – Everipedia is one, which is managed by Larry Sanger, the co-founder of Wikipedia.

It should also be said that EOS is no stranger to controversy. The launch of its mainnet was nightmarish, the whole process lasting more than a week, with block producers failing to agree on whether EOS was ready to go live all on its own.

Since EOS has been fully operational, Block.one has paid over $400,000 to freelance security researchers for discovering critical flaws in code that weren’t fixed in time for the launch.

In any case, ConsenSys says it will use Whiteblock’s findings to develop comprehensive reports, which it will deliver to partners, including Ledger Capital, Bo Shen, Enterprise Ethereum Alliance, Microsoft, and Google. Academic institutions like MIT, USC, and Duke have reportedly committed to contributing resources to round out the research.

Extra-curiously, one of the listed partners, Bo Shen, is actually co-founder of Bitshares, an autonomous blockchain organization developed by Dan Larimer and released in 2014.

The research continually highlighted architectural resemblances between Dan Larimer’s Bitshares system and EOS – particularly the ability to revert state and make changes all the way back to the genesis block.

Whiteblock has allowed Hard Fork to publish the study, which includes a thorough representation of its methodology alongside detailed test results. The full report can be accessed from this link.

For those that remain unconvinced, the firm also states it will livestream the EOS benchmark tests in November.

Funnily enough, you can even RSVP here.