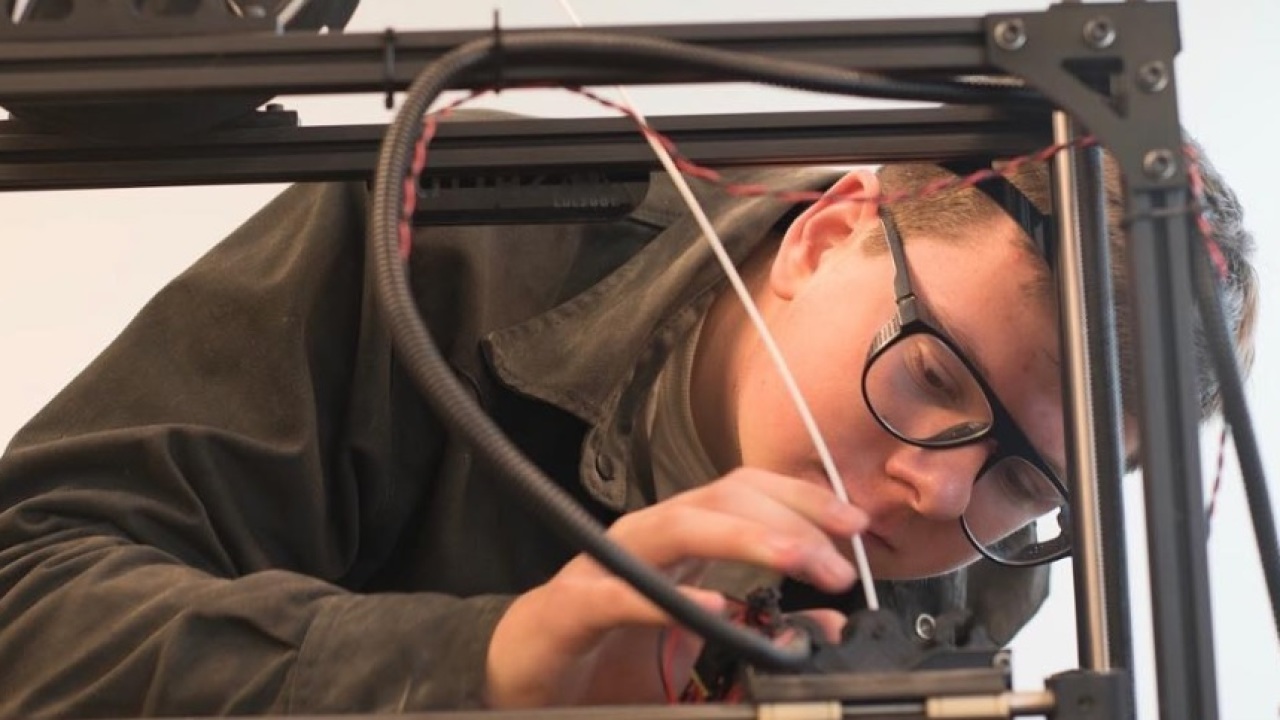 A high school dropout, a Bitcoin BTC millionaire, and a teenage tech entrepreneur walk into a restaurant. The host asks: “Table for one Sir?” Why? Because Erik Finman is just one person.

Finman learned to walk in a motel room his parents lived in when he was a baby, they didn’t start off rich. He mentioned this a few moments after I’d interrupted him during an anecdote about hiring people with checkered backgrounds. I became intrigued, because before he said that, I thought he was just a rich kid who got lucky.

Finman made his first million in Bitcoin thanks to a $1,000 gift from his grandma. He ended up dropping out of high school, working the cryptocurrency game, and starting his own online tutoring company – which he sold for 300 bitcoins (worth approximately $60,000 at the time). Today, those same coins would be worth $1.8 million. On the surface, Finman seems like the benefactor of some incredible fortune.

He describes his parents as “two Stanford PhDs,” who’ve done well for themselves. But he points out they weren’t always so stable, hence mentioning his toddler days in a motel. “I don’t remember those days, obviously, but it’s not like I grew up incredibly rich.”

And, that seed money from grandma? He and his two older brothers, who also received a grand a piece, tried to give that back.

She thought her time was up. She was giving us money to help pay for our education because she wasn’t sure how much longer she’d be here. We tried to give it back and say we didn’t want it, but she wouldn’t take it.

His oldest brother, at the time in his early 20s, took the then 12-year-old Finman to observe a political rally decrying capitalism and government control of global financial institutions. There, they learned about Bitcoin, a new type of technology that could take the system down. “We didn’t think of it like a financial investment. We saw it as a way to fight the man,” Finman tells me.

In 2011 12-year-old Erik Finman, already feeling the sting of bullies in middle school, made a bet with his parents. If he became a millionaire before he was old enough to vote, he didn’t have to go to college. He was counting on his newfound knowledge of cryptocurrency to win that bet for him.

He was eager to escape his tormentors, “The last time I felt smart was in the third grade,” he tells me. But he admits had no idea of how much worse it would get. His tolerance of what he considered a broken educational system quickly wore thin upon the arrival of his freshman year.

His voice changes when he talks about his high school experience. I can tell he’s told these stories before – I’ve read them in other articles. A small part of me expects him to break out into an evil villain monologue, ranting about how everyone who doubted him was wrong about him.

In a way he does. He tells me about the school coach, who also taught a class, who told him he should drop out and go work for McDonald’s. But he’s not laughing. In fact a bit of the confused kid he must have been seems to come through as he reflects softly, “I don’t know what his problem was.” This doesn’t seem like the same person I just read about, who sent a former teacher an email with a link to an article about him, and the subject “Look at me now bitch.” He gets a little quieter and continues:

There was another teacher who took an entire class just to make fun of me. She was saying these mean things about me and then she went around the room and let the kids in the class raise their hands if they had something to say about me. It was like an entire class dedicated to roasting Erik Finman.

He doesn’t reflect on this with anger or arrogance. Maybe I’m editorializing or misjudging, but it seemed to me that Finman still doesn’t understand why they hated him. As he continued, I began to see Finman as a mature adult who is willing to take chances because he’s very self-aware. It was harder to see him as the “poor little rich kid” he’s been portrayed as in the media who was just in the right place at the right time.

But the media didn’t get there on its own. When he was only 15 he convinced his parents to let him drop out of high school. Somehow, they agreed, and he moved to Silicon Valley to chase his millions.

The tens of thousands he’d made in Bitcoin by that point was enough to finance his dream. But California, it turns out, wasn’t much different than high school. High powered executives told him he’d never win the bet with his parents and he suffered at least one violent criminal encounter. Finman learned the hard way that people rarely support someone who is on their way up, especially when that person takes a non-traditional approach.

Of course, anyone who follows Bitcoin knows how Finman’s financial future played out. He hung on to his Bitcoin holdings, which ended up being worth a fortune, and continued to make smart investments. Yet through it all there appeared to be two Erik Finmans.

There’s the one that, at age 12, was not only capable of understanding cryptocurrency in 2011 when most of us had never heard of it, but had enough foresight and maturity to invest every penny he had into it. This Erik, now 19, tells me that he loves his family, “my brothers are the best. I’m blessed to have such a great family.” This Erik also spent his time and money building a prototype Dr. Octopus suit for a younger teen, out of the goodness of his heart.

But then there’s the Erik who grips a nine millimeter pistol while lying on a bed of cash.

Cash so worthless compared to Bitcoin I'm sleeping on it…

He smokes cigars and doesn’t give a damn.

I asked Finman about this fellow, the one that appears to be balling out of control and incapable of coming off as anything other than a jerk. He’s been compared to Martin Shkrelli, and that’s not a compliment by any means. Finman, in the same article, claims he enjoys being seen as edgy. In his words:

I think being a provocateur is a fun way to get people to pay attention to my ideas. You see the reaction to it, people go crazy. But that helps draw attention to the actual world-changing projects that I want to do.

I told Erik I didn’t think he was a provocateur at all. He’s got the “gangsta” pics, sure. But the gun is fake, he doesn’t really smoke, and none of those images were posted to try and convince anyone he actually lives the life of a 1990’s rapper. “It was satire. I mention it as satire,” he says, then tells me “I knew what it would look like from a marketing point of view, that’s not why I did it, but I knew. It was just fun. I wanted to recreate this imagery from 1990s hip hop that sort of made fun of certain ideas about money.”

I challenge his provocateur image further by asking him if it would be fair to describe him as someone with a lot of empathy for others. He doesn’t hesitate before telling me that he’s the kind of person who believes everyone deserves a fair shake, and that he believes in second chances – which is why he’s worked with people who have checkered backgrounds before.

I’m not interested in his thoughts on reformed drug addicts working in technology though, because, as I told him, I’ve heard that story before.

But, until I spoke with Erik Finman, I’d never heard the one about the teenage Bitcoin millionaire from an upper middle class family who turned out to be a kind, intelligent, and mature person full of drive and ambition.

What appears to be a rich kid’s arrogance is actually a young man’s confidence in himself and the ideas that have put him in a position to run his own company, Finman Technologies.

“Grandma’s fine now, by the way,” he told me while we were talking, “she was scared she didn’t have long left back then, but thankfully she’s still around.” I didn’t specifically ask him, but I would imagine she’s proud of the way he used her $1,000 gift. Because his next project involves opening a school for people who, like him, struggle to learn in the traditional high school environment.

He told me he has ideas that will revolutionize the educational system and prioritize the needs of teachers and students. “Teachers will make a lot more money at this school at very little cost to students,” he declares triumphantly. I laughed, which prompted him to say “I know, it sounds too good to be true.” I replied that it didn’t, not really.

As long as there’s someone to tell him he can’t do it, I’m sure he’ll succeed.