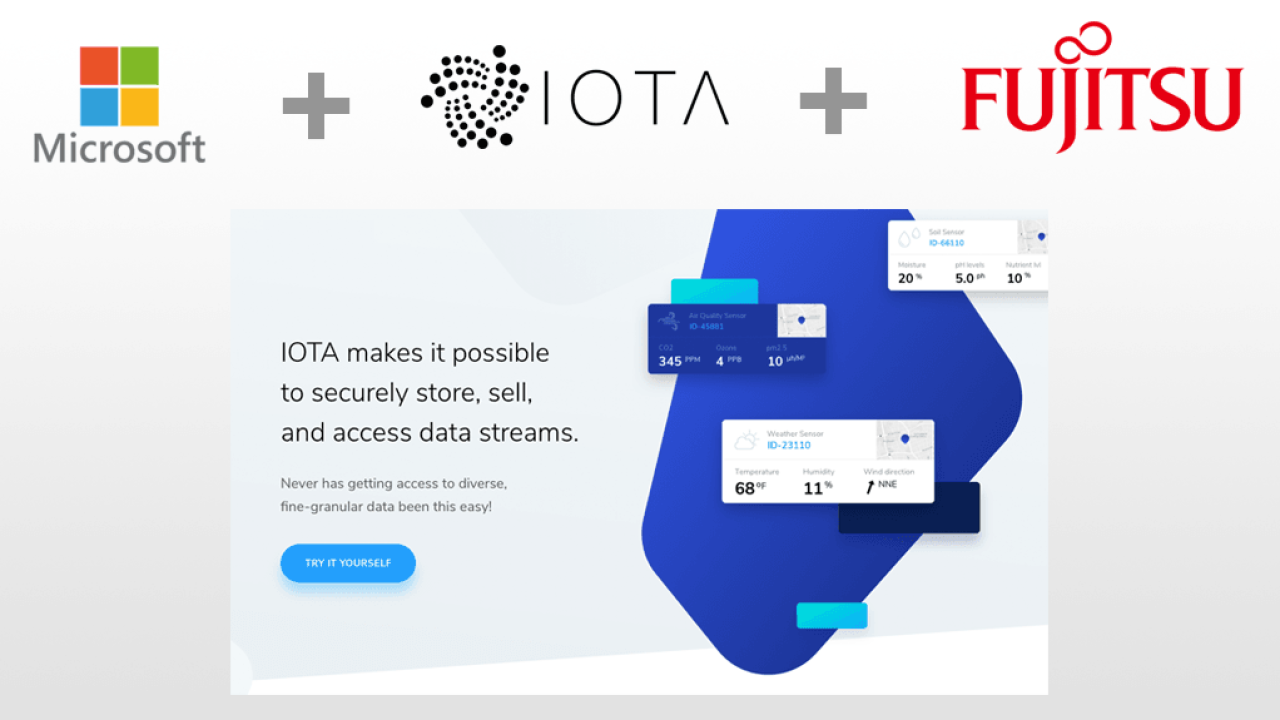 Update: IOTA has since come forward to clarify it has no formal partnership with Microsoft. Instead, Microsoft should be considered a participant in the data marketplace experiment, according to co-founder Dominik Schiener. Read the full story here.

Up-and-coming cryptocurrency startup IOTA has partnered with Microsoft, Fujitsu, and twenty more companies to launch the first publicly accessible data marketplace for the Internet of Things. What makes this undertaking especially intriguing is that the marketplace will be entirely powered by a distributed ledger.

The initiative, which will allow stakeholders to share and monetize their data in a secure way, aims to demonstrate a proof of concept for a tamper-proof data marketplace. Once uploaded to IOTA’s decentralized ledger, all data is distributed to countless nodes in order to ensure immutability.

IOTA is currently the ninth biggest cryptocurrency by market share on Coin Market Cap, boasting a market cap of $2.95 billion. What is notable is that IOTA uses an interesting new technique to distribute and decentralize its ledger. Unlike standard blockchain technology used by most companies, IOTA relies on a method it calls Tangle.

Those curious to see how Tangle works in practice can check out this visual demo of how the network scales.

“We are very excited to announce the launch of our data marketplace,” said Sønstebø. “This will act as a catalyst for a whole new paradigm of research, artificial intelligence, and democratization of data.”

In addition to Microsoft and Fujitsu, a number of other high-profile companies – including Deutsche Telekom, Bosch, Accenture, and PwC – will also participate in the demo.

“We are excited to partner with the IOTA Foundation and proud to be associated with its new data marketplace initiative,” said Microsoft blockchain specialist Omkar Naik.

“This next generation [sic] technology will accelerate the connected, intelligent world and go beyond blockchain that will foster innovation real world solutions, applications and pilots for our customers,” he continued.

The marketplace demo will run until January. IOTA has promised to release a series of blog posts and case studies to showcase the various ways in which companies and individuals can benefit from using its technology.

Ordinary netizens will also have a chance to sell their data on the marketplace by connecting their IoT devices to the IOTA ledger. This will enable them to cash in on various data like weather station statistics and more.

For this inaugural demonstration, IOTA says all data will be valued equally, but this might change in the future. “For this proof of concept, all of the data is rated equally,” said Schiener. “In the next iteration we will include a simple bidding mechanism coupled with more complex querying for datasets.”

Meanwhile, those curious to know more about IOTA, Tangle, and its new marketplace ought to tune in to our upcoming TNW Answers session with co-founders Schiener and Sønstebø this Thursday at 8:00 AM PDT, where they will be responding to questions from readers.