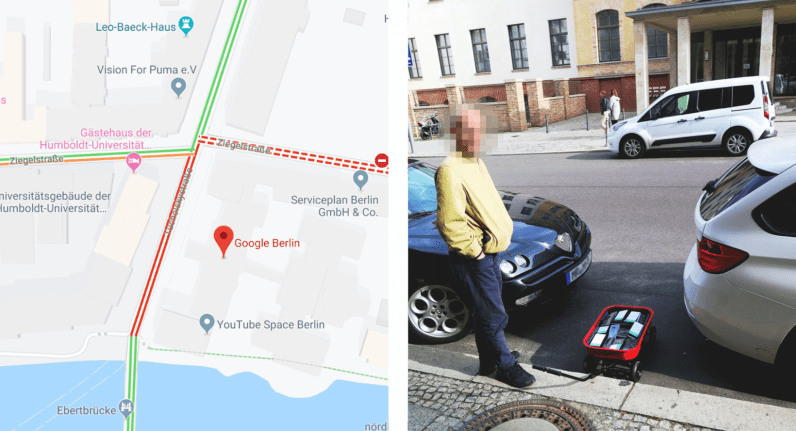 Google Maps changed GPS navigation forever, in part by making it accessible to everyone, in part by helping provide accurate traffic reports. Well, maybe not always accurate, if artist Simon Weckert has any say.

Weckert managed to fool Google Maps into reporting non-existent traffic jams by wheeling around a cartful of 99 phones down the streets of berlin. Wherever Weckert went, a jam appeared. Weckert tried his scheme last summer, but only revealed the results this week for Google Maps‘ 15th birthday. It’s an incredibly simple tactic (assuming you have access to 99 phones), but one that appears to have worked perfectly. You can watch the results of the experiment here:

As you might know by now, Google determines traffic information largely thanks to our phone data sending broad location cues, which Maps can then use to suggest specific routes avoiding the jammed roads. Weckert said his intent was to draw attention to the power Google has in determining our behavior; changing a street from green to red on Maps has an impact on our physical world.

When Business Insider asked Google about the experiment, the company noted it had launched the ability to distinguish between cars and motorcycles in a few countries “though we haven’t quite cracked traveling by wagon. We appreciate seeing creative uses of Google Maps like this as it helps us make maps work better over time.”