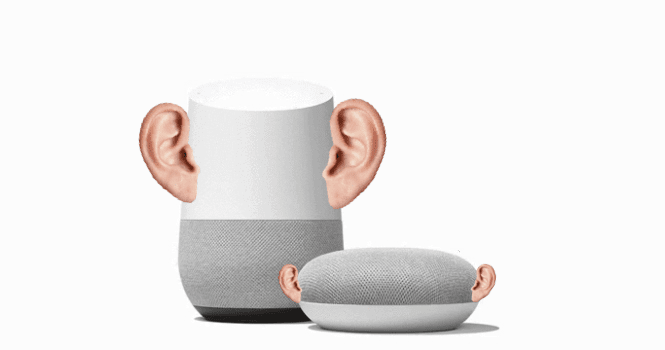 Not only is your Google Home device listening to you, a new report suggests there might be a Google contractor who’s listening as well. Even if you didn’t ask your device any questions, it’s still sending what you say to the company, who allow an actual person to collect data from it.

A new report from Belgian broadcaster VRT News describes the process by which Google Home recordings end up being listened to by contractors — and the scary part is that it apparently doesn’t take much, if anything, to start a recording. While the recordings are not listened to live, audio clips are sent to subcontractors.

VRT, with the help of a whistleblower, was able to listen to some of these clips and subsequently heard enough to discern the addresses of several Dutch and Belgian people using Google Home — in spite of the fact some hadn’t even uttered the words “Hey Google,” which are supposed to be the device’s listening trigger.

The person who leaked the recordings was working as a subcontractor to Google, transcribing the audio files for subsequent use in improving its speech recognition. They got in touch with VRT after reading about Amazon Alexa keeping recordings indefinitely.

According to the whistleblower, the recordings presented to them are meant to be carefully annotated, with notes included about the speakers presumed identity and age. From the sound of the report, these transcribers have heard just about everything. Personal information? Bedroom activities? Domestic violence? Yes, yes, and yes.

While VRT only listened to recordings from Dutch and Belgian users, the platform the whistleblower showed them had recordings from all over the world – which means there are probably thousands of other contractors listening to Assistant recordings.

The VRT report states that the Google Home Terms of Service don’t mention that recordings might be listened to by other humans.

Google’s defense to VRT was that the company only transcribes and uses “about 0.2% of all audio clips,” to improve their voice recognition technology.

This doesn’t only raise ethical concerns, but also shows how easily our privacy at home or work is being violated again and again by companies that keep promising improvement. Let’s hope these types of reports make them really listen to us – with permission this time.

Read next: I wish Apple would whole-ass its new MacBooks