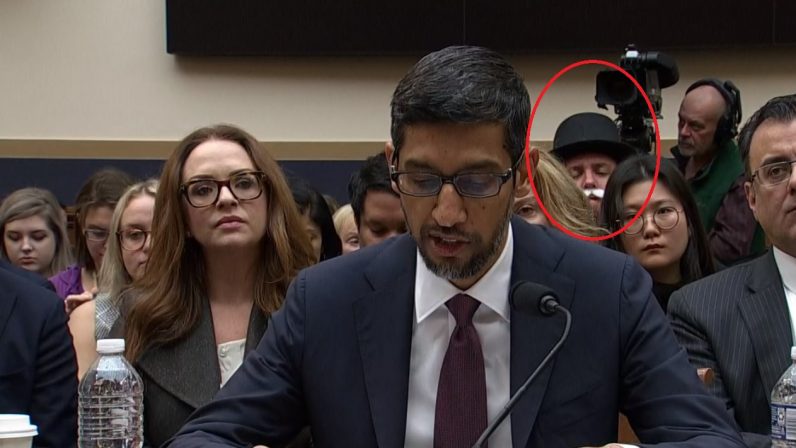 Google‘s CEO, Sundar Pichai, is in Washington today. He’s trying to explain how the world’s most advanced technology company works to Congress. At some point we’re sure he’s going to be arrested for witchcraft.

Pichai’s not the only fat cat with deep pockets in the room – sure, a lot of those politicians have that “I roll with Ajit” cash, but the CEO of Google has Microsoft money – he has an admirer in the room whose name is synonymous with wealth: Rich Uncle Pennybags (he’s the Monopoly man).

Monopoly Man returns to Congress to troll the CEO of the biggest Monopoly in the world: Google.

The Grand Old Party is spending its time (and our tax dollars) questioning the CEO of Google about a conspiracy theory they heard from an old man who doesn’t use computers.

Representative Zoe Lofgren asked “Right now, if you Google the word idiot, under an image search, a picture of Donald Trump shows up. How does that happen?” Interestingly, Pichai’s answer basically equated to “it happens because of math.” I’m paraphrasing, of course.

Anyway, back to The Monopoly Man. The character has the top hat and the mustache:

And when they finally popped the monocle on, I’m not ashamed to admit I laughed out loud. Even though you had to see it coming, it was still funny.

Perhaps the subtlety of the message (looking old, rich, and white isn’t exactly going to put secret service on alert in that zip code) will slowly sink in, and Congress will consider doing something about the power companies such as Amazon, Google, and Facebook have.

And we’re not saying these companies are monopolies. Everyone else is, but not us.

We’re saying anything would be better than watching the US political party in power spend a Tuesday in Washington discussing a debunked conspiracy theory. Rich Uncle Pennybags fits that bill.

Read next: Over 65 percent of new developers are self-taught. I’m surprised it’s not 100 percent