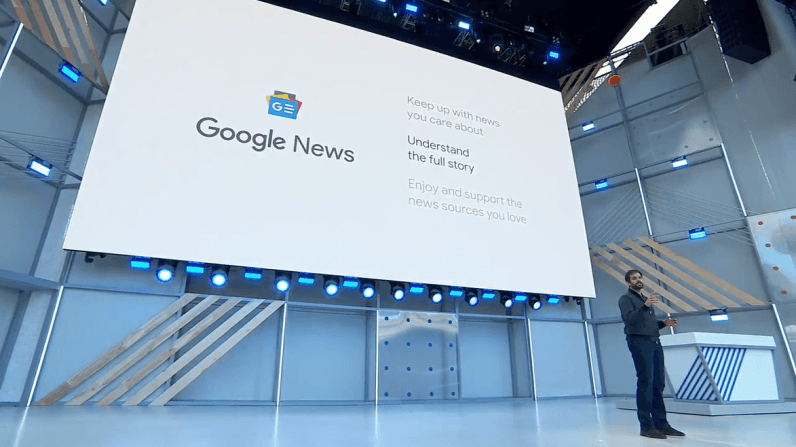 Google News is one of Alphabet’s oldest and most instantly recognizable products. It was built shortly after the 9/11 attacks in New York by a Google engineer as a 20-percent project, in an attempt to better understand the terrorist atrocity that struck the US.

It’s also arguably one of its most important. Millions head to Google News in order to learn about current events, and to see what’s happening in their community. Without thinking about it, Google has created journalism’s biggest gatekeeper.

With that in mind, Mountain View has thought about how Google News can be improved, and has made some pretty drastic (but welcome) adjustments.

Google News now uses AI (along with the vast quantities of behavioral and search data it owns on us all) to show us more relevant content. When you open the Google News app, the first five stories in your briefing will be custom tailored to your personal tastes and interests.

The nouveau Google News is able to make these determinations from day one, but will improve over time. If there’s one news organization you frequently avoid — like Fox News or the BBC — or if you’re not particularly interested in a specific topic, Google News will adjust what it shows you accordingly.

You can’t help but think Google is being a little bit brave here. As shown by Facebook’s trending stories, aggregating stories is a bit of a political minefield, and can earn accusations of bias from both sides of the partisan divide.

According to Google News engineer Trystan Upstill, the new update also emphasizes depth and quality of reporting, and aims to uplift local voices.

Local journalism often takes a backseat to the larger, better-funded national and international news organizations, so it’s pretty refreshing to see how Google News is able to amplify these smaller (but vitally important) outlets.

Google News also has a refreshed visual aesthetic that plays greater emphasis to featured images and videos. Pictures are bigger and bolder, and allow readers to better engage with stories.

Another feature introduced to Google News is called Newscast, which feels a little bit like Twitter’s Moments. It allows you to explore a particular event or story by swiping through coverage and commentary.

Given how popular Moments are for Twitter, you can’t help but feel this is a smart move for Google.

Another feature brought into Google News is called Full Coverage. Essentially, this is a more thorough exploration of a story. Just think of Moments, and then multiply it by a factor of ten.

Not only does Google News show you detailed, rich perspectives on an event, but it also tries to but it within a chronological context, so you can explore how things transpired. It also tries to understand the news for you, and to answer questions before you even ask them.

Ultimately, the one thing that’ll get news organizations chomping at the bit is subscriptions. It’s now possible to subscribe to paywalled news sites, like the Washington Post, within Google News.

This addresses two of the biggest pain points within paywalls, which is the fact that you’ve got to create and manage a subscription for each site, and if you use multiple devices, you’ve got to log in on each one.

By addressing these two issues, hopefully Google will make it more likely people will be willing to pay for the journalism that’s so fundamentally essential to our democracy.

The updated Google News is rolling out today on iOS, Android, and the web, and will be available in 127 countries.

Read next: Google now uses the camera to help figure out which direction you're facing