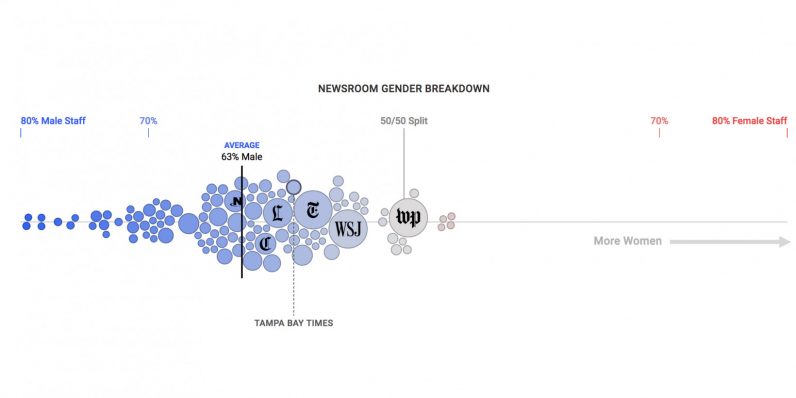 Over the past few years, major tech events have become as much a show-and-tell of personnel as they have product. Google, Apple, Microsoft and others flaunt sex and race as ways of one-upping each other in what has become perhaps Silicon Valley’s most public battle: diversity.

But now Google is turning the tables and reporting on those typically doing the reporting.

Google News Lab today released a visualization based on American Society of News Editors (ASNE) data detailing just who’s working in America’s newsrooms. And the results, as you might expect, show a lot of room to improve.

There are outliers, like Jeff Bezos’ 180 at the Washington Post in recent years. The Post sports a 50/50 split of male and female personnel, including similar splits in leadership roles. Where the publication suffers, still, is in racial diversity, with 73 percent of leadership roles being filled by caucasians.

Still, it’s better than most. The Chicago Tribune, for example, clocks in with a 39 percent female workforce, and 88 percent of its leadership positions held by caucasians.

Notably though, most newsrooms are making significant progress. 44 percent have gained gender diversity since 2001, while only 26 percent — including San Jose Mercury News and USA Today —  have gone backwards. The Houston Chronicle and Pittsburgh Post-Gazette are two of the biggest movers in this timeframe, as is the aforementioned Washington Post — a company that has completely transformed itself under Bezos’ leadership and is now one of the most diverse publications tracked.

Google, whether intentional or not, pointed the finger right back at those doing most of the pointing. While tech giants aren’t yet where they need to be diversity-wise, newsrooms, as it turns out, aren’t either.

We’ve all got work to do.