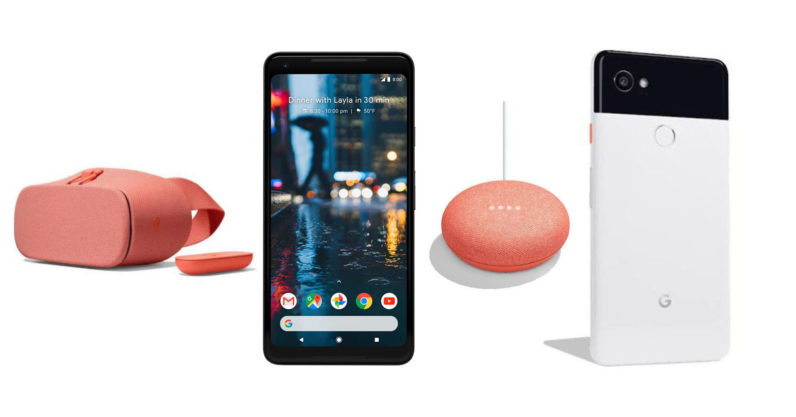 Google is set to announce its second batch of Pixel phones this year on Wednesday. By all indications, the event will be saturated with new products. Leaks have told us much of what to expect in terms of hardware, but Google shines primarily because of its software, and chances are the company still has some tricks up its sleeve.

While the information is based off of leaks and rumors, we expect most of it to hold up come Wednesday. We’ll be in attendance at the event, which starts at 9 AM PT / 12PM ET / 6PM CET on October 4. Stay tuned to TNW for the news as it comes, and you can watch Google’s livestream here.

Googles two new phones will of course be the stars of the show. Thanks to the ever-churning rumor mill, we already have a solid idea of what the phones will look like and what hardware to expect.

The devices are set to feature typical 2017 flagship specs, and are nearly identical other than their body, battery, and display size. The internals include a Snapdragon 835 processor, 4 GB of RAM, and 64 GB/128 GB storage configurations. They do have one almost-unique hardware feature: an ‘Active Edge’ feature will let you squeeze the sides to launch shortcuts, like on the HTC U11.

…and without a case pic.twitter.com/4QrvyM9Hro

As with last year, don’t expect to see a microSD card slot to augment that storage, though Google may make up for it with unlimited Google Drive storage (more on this in a bit).

The most controversial change will likely be the removal of the headphone jack. Both devices are set to feature stereo speakers as a replacement, and Google may include USB-C headphones, but it still seems likely a sucky trade-off. It’s especially puzzling after Google made fun of Apple for killing the headphone jack last year.

The smaller model is reportedly being built by HTC, and unfortunately does not go with the slim bezels that have become so popular this year. Leaks suggest it looks very similar to the first generation Pixel, and will come with a 2,700 mAh battery. Though that’s not particularly large, the extra efficiency of the 835 will likely mean significantly improved battery life over last year’s model. It will reportedly start at $649, and we expect it to come in at least three colors: ‘clearly white,’ ‘just black,’ and ‘kinda blue.’

Meanwhile, the larger Pixel will be made by LG and is taking on a more premium role thanks to smaller bezels and an 18:9 aspect ratio. The phone will reportedly feature slightly curved edges and 80-85 percent screen-to-body ratio, right in line with the Galaxy S8 and iPhone X. It’ll have a 3,520 mAh battery, come in at least black and black and white colors. We’re expecting an $849 starting price.

We don’t know much about the cameras yet, other than that they’re not the dual camera type that have become popular in the last couple of years, but rumors are floating around suggesting Google may have added optical image stabilization to improve low-light performance. Google will likely once again use software to get the most of its camera hardware. Though Google’s camera app has had a ‘Lens blur’ mode that only needed a single camera for years, the company is reportedly working on a better portrait mode to compete with the iPhone.

Google Lens, which allows you to use AR to recognize real world locations and objects, will likely be integrated directly into the Pixel’s camera app.

The devices are likely to become the first phones to use an E-SIM card, first seen in the Apple Watch Series 3, which will allow you to switch carriers without having to deal with those little plastic cards. The tiny chip is permanently embedded into your phone, and handles carrier switching via software.

Lastly, rumors have recently popped up suggesting Google has a secret third phone called the Pixel Ultra. It reportedly does away with the Android navigation bar and features dual cameras, but the leaks around it are too shaky to be reliable. Don’t hold your breath for this one.

A leak by Droid Life gave us our first glimpse at the Google Home Mini, which seems to be Google’s alternative to Amazon’s Echo Dot. It will cost just $49 and will come in a few different colors, including Chalk, Charcoal and Coral.

It will do all the usual Google Assistant things like setting reminders, telling you the weather and controlling your smart devices. There appear to be some LEDs atop the device that function as status indicators. We don’t know much else about how it will work, and considering its size, it likely won’t sound as as good as the original Google Home, but I presume you’ll be able to connect it it to your existing sound system, like the Echo Dot.

Perhaps more interesting is a rumored Google Home Max, which is meant to be the company’s premium alternative to devices like Apple’s HomePod and the Sonos Play:3. We don’t know much about the device other than that it will feature stereo speakers, but the ‘Max’ name suggests high-end sound quality. At this point, however, it’s not entirely clear whether the speaker will be announced at the October 4 event or is being worked on for a later date.

We’ve also gotten an early look at a new Daydream VR headset, which now features even more fabric and will also come in Charcoal, Fog, and Coral colors. We don’t know much about it other than that it will cost $99 instead of $79. Perhaps that means Google is using better optics or new sensors, but we’ll have to wait until Wednesday to find out more.

It’s been a while since we had a premium Chromebook from Google itself, so another Droid-Life leak suggests we’ll be getting one on Wednesday. The device is expected to flip over and turn into a tablet like most new Chromebooks, and Google will sell an optional Pixelbook Pen for $99. The pen is sensitive to both pressure and tilt.

The Pixelbook is expected to come in 128, 256, and 512 GB storage configurations, which is notable as Google has always emphasized cloud storage on Chromebook devices. Its last Chromebook Pixel, which began at $999, only had 32 gigs of storage.

That was a downer for anyone hoping to use the device as their primary laptop, as it gave you very little room to save data locally and keep working offline. The Pixelbook aims to change that. It maintains the premium pricing though, at $1,199 for the 128 GB, $1399 for 256, and $1,749 for the 512 GB option.

Since it seems all but certain Google is removing the headphone jack on its new Pixel phones, the company will likely want to emphasize different technologies instead: USB-C and Bluetooth.

Rumors suggest the Pixel 2 will include USB-C headphones in certain regions. These headphones have the potential to sound better thanks to using their own DAC and software optimizations, though we have no idea how good the ones Google includes will be. They will also, of course, feature easy access to the Google Assistant.

The company is also rumored to be working on a pair of AirPods competitors, but you can also expect the company to emphasize third-party headphones with Google Assistant built-in, like Bose’s new Quietcomfort 35 II. The idea seems to be suggesting that losing the headphone jack can lead to more convenient experiences, but I’m still sad to see the port go.

With just a couple of days to go, it seems like the event will be jam-packed with news. Stay tuned for TNW for everything to come.

Read next: Farewell Microsoft Groove, we barely listened to you.