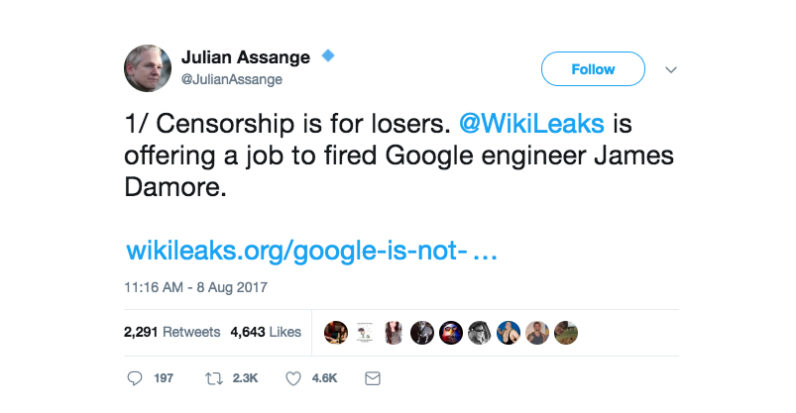 The scandal with the Google software engineer sacked for reinforcing controversial gender notions has taken a curious turn. Shortly after the alt-right stormed in to defend James Damore, the ex-employee appears to have earned a new supporter: The Wikileaks chief himself, Julian Assange.

The founder of the notorious whistleblowing platform took to Twitter to condemn Google for firing Damore in a five-tweet rant, equaling the move to an act of “censorship.” In addition to his critique, Assange extended a helping hand to the banished engineer by inviting him to work at Wikileaks.

“Censorship is for losers,” Assange exclaimed.

1/ Censorship is for losers. @WikiLeaks is offering a job to fired Google engineer James Damore. https://t.co/tmrflE72p3

In the follow-up tweets, the Wikileaks boss remarked that reprimands should never include firing employees – women or men – for “politely expressing ideas.”

For context, in his manifesto Damore claimed that the women are destined to perform worse in tech due to “innate dispositional differences.”

Here are the rest of Assange’s tweets:

2/ Women & men deserve respect. That includes not firing them for politely expressing ideas but rather arguing back: https://t.co/Gg5qPH0lcN

5/ “Shut up and think” while the taboo of the day may change the fate of workers under cognitive capitalism remains the same #JamesDamore pic.twitter.com/RtIB5ZJHMS

Meanwhile, the Wikileaks leader remains holed up in the Ecuadorian embassy in London, where he resides under asylum after he breached bail to avoid getting prosecuted over allegations of sexual assault and rape back dating to back to 2010.

Assange’s complicated history with anti-PC and feminist culture has been explored in more depth in Laura Poitras’ award-winning documentary from 2017, Risk.

Asked to comment on the Damore situation, Google CEO Sundar Pichai adamantly insisted the engineer had violated the company’s code of conduct and “crossed the line by advancing harmful gender stereotypes in our workplace.”

Read next: Put a laptop in the palm of your hand with this cool pocket PC — for under $200