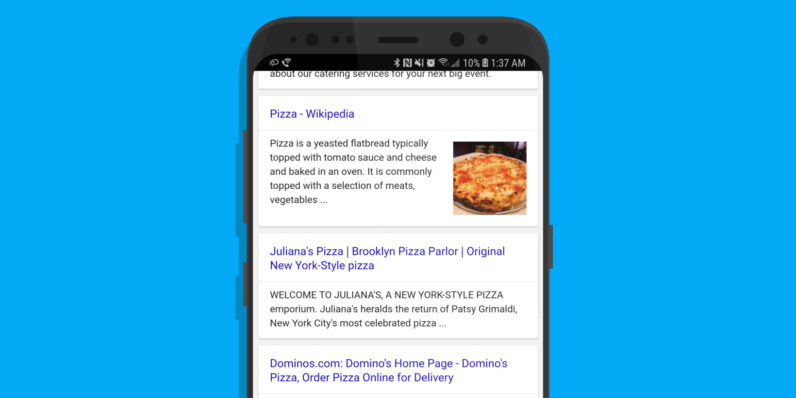 Our own Napier Lopez spotted an odd change in Google’s search service on Android today: search results don’t include URLs like they used to. Instead, they only display the page’s title, a thumbnail of a featured image from the site, and a blurb.

It isn’t clear if Google is merely running a test or gradually rolling out a change. But it’s hard to see how this helps anyone, besides making the interface a bit cleaner. The company also seems to be testing another way of displaying URLs and AMP badges:

Seems Google is pushing AMP even more by making its AMP urls way more prominent in the SERPs – higher CTR on mobile for those results. pic.twitter.com/3I7DY57oly

I’m not a fan of the new experiment. For users, it becomes more difficult to figure out which site they’re be directed to when they tap on a result. That’s annoying if you roughly know where you want to go, and only need help finding the right page.

There’s a chance that webmasters will lose out on traffic from those people who are looking for their sites specifically.

The move might be driven by a belief that SEO and Google’s indexing are now good enough to accurately point people to the best search results without displaying URLs, but it seems like a premature step at this point, especially if Google can’t figure out a better way to tell you what site you’re heading to.

Read next: 5 reasons every young tech entrepreneur needs a mentor