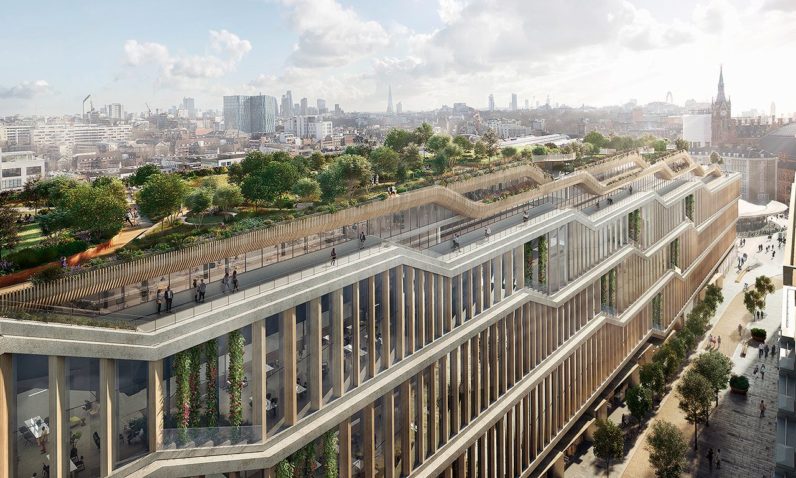 Apparently, Google missed the memo on Brexit. Instead of fleeing the UK mainland, the internet giant just submitted plans for an enormous new ‘landscraper’ that will serve as its headquarters in London.

The 11-story building will cover an astounding 1 million square feet (92,000 square meters), stretching longer than the height of London’s iconic Shard. According to the Guardian, the building will be part of a whole Google campus for around 7,000 employees. Construction is set to begin sometime next year.

Although Google declined to comment on the price of the building, a quick back-of-the-napkin calculation can give some indication of the damage. Taking the square foot value in London’s Camden borough and multiplying by a million gives us 837 million British pounds for just the surface area. And that’s without any construction costs.

The Guardian article states that Google turned down an earlier proposal by London-based architects AHMM for being “too boring”. That project had a price tag of a billion pounds, so we can safely assume this new ‘landscraper’ will set them back more than that.

Google’s new digs are situated in a pretty significant part of London. Its HQ sits on the side of Kings Cross St Pancras station, and is a five minute walk from Euston Station, which links the capital with other important British cities, like Manchester, Liverpool, Glasgow, and Birmingham.

As a result, it’ll be interesting to see how Mountain View reconciles the gargantuan task of constructing its British headquarters, with minimizing disruption to its neighbors.

I’m also curious to see what Google’s new headquarters will do to the neighborhood. That part of London is undeniably upmarket, true, but it also has a lot of character that’s survived the gentrification. There are great places to eat and drink, and some awesome nightlife spots, like the Scala music venue.

Will these be able to co-exist with Google’s new HQ. Or will we see a sterilization of the area, as has happened in the Bay Area in California, and in Shoreditch in London?