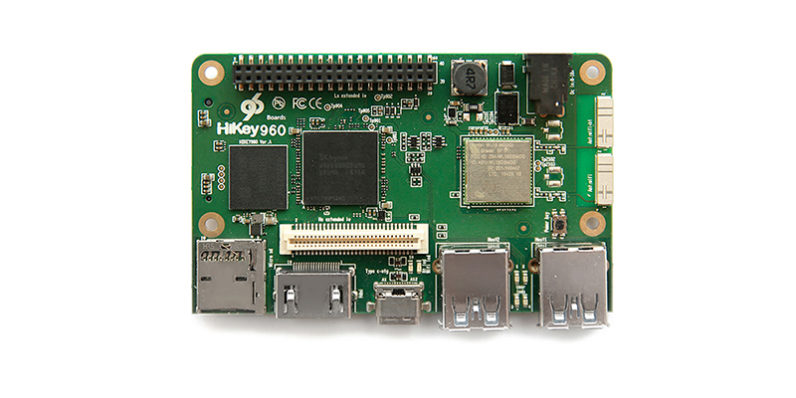 Thanks to a collaboration between Google and Huawei, Android developers will no longer have to code on Intel x86 architectures – or Chromebooks – to build software for ARM-based systems. They’ll get to do it on a beefed-up Raspberry Pi-style computer that also happens to run Android.

The HiKey 960 is a powerful single-board computer that aims to give Android developers a high-end solution to build and test ARM applications natively. Based on Huawei’s octa-core Kirin 960 chip, which also powers the Mate 9, the device boasts four high-intensity Cortex-A73 cores and four low-power Cortex-A53 cores.

In addition to Android, the board comes with support for Linux and can also be used to craft robots, drones, and other smart devices. While primarily aimed at developers, recreational consumers have the option to simply use the HiKey as a straight-up Android computer.

To give you some more specs, the board packs 32GB of storage, 3GB of LPDDR4 RAM as well as the Mali-G71 GPU with support for 4K graphics. The bummer, though, is that the device will only have HDMI 1.2a slot, meaning output will be limited to 1080p.

The HiKey further features 802.11 b/g/n/ac Wi-Fi and Bluetooth 4.1, PCIe m.2 slots for extra storage and connectivity options. It also has 40-pin and 60-pin expansion connectors and multiple high-definition outputs that offer the ability to hook cameras to the board.

The device is expected to launch in May at the price of $239. Shipping will be initially available only to customers in the US, the EU and Japan, with plans to expand worldwide in the near future.

But before you rush to place your order, here’s a little heads-up: While you can download Android 7.1 on the device, it won’t be all that easy. Google has laid out detailed instructions on how you can do that here.

Read next: Google and Facebook scammed out of $100M in elaborate phishing attack