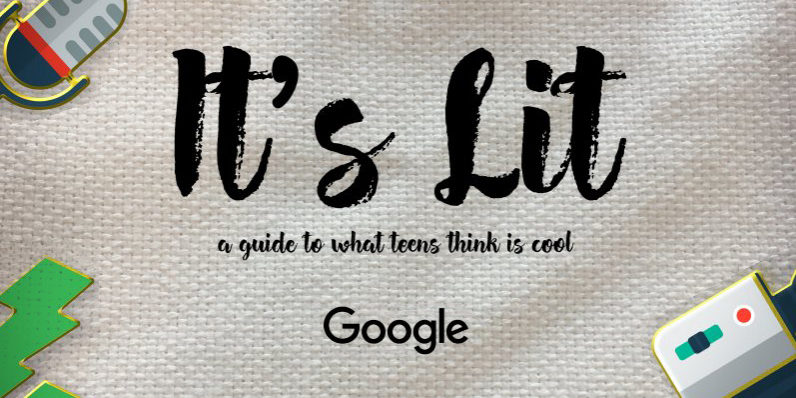 Step aside Nike, Apple and Vice, there’s a new ‘cool and hip’ brand in town – and it’s Google.

The Big G funded a research to find out which brands are most popular among Generation Z and it turns out today’s teenagers think nothing is cooler than Google – not even Xbox, Playstation or Snapchat ranked as more “unique, impressive, interesting, amazing, or awesome” than Google and its products.

While Gen Z usually refers to those born between the mid-1990s to early 2000s, the Mountain View behemoth focused on American teenagers aged 13 to 17 to reach this conclusion. The findings were published in an equally cool-titled ‘magazine’ called It’s Lit: A guide to what teens think is cool.

As the team behind the holy GBook of Cool explains, the survey was compiled to offer insight into what brands teenagers religiously pay attention to and get most excited about. The data provided reflects a sample of 1,100 teens and 122 brands.

“Unlike millennials,” the study found Gen Z’ers are “ambitious, engaged, and feel like they can change the world” which is why it was so important to pinpoint what the young leaders of tomorrow find cool – that and the $44 billion purchasing power they hold.

YouTube – which is owned by Google – and Netflix topped the charts as the two coolest and most recognized services among Gen Z, followed by Google in the number three spot.

The research further indicated that while millennials tend to have a preference for Playstation, teenagers would much rather game on Xbox.

As far as coolest games go, The Legend of Zelda was the most popular title among Z’ers, ranking ahead of Call of Duty: Black Ops and Grant Theft Auto. Pokemon, Minecraft and Counter Strike: GO completed the list.

Curiously, The Legend of Zelda was spelled wrong in the report. Typos, Google? Not cool.

The most used social media platform for 13 to 17 year olds was Instagram, with almost 60 percent of all teenagers having signed up for the service. Snapchat and Facebook completed the top three with  56.4 and 52.8 percent each.

Interestingly, the study found that Gen Z’ers used Google+ more often than Twitter and Instagram – though that’s hardly surprising given Google’s undeniable coolness. While Google is usually trustworthy, this one made me raise an eyebrow.

Find out what Gen Z thinks is cool these days and browse through the It’s Lit report here.

Read next: Samsung gives an insider view on the design process behind the Galaxy S8