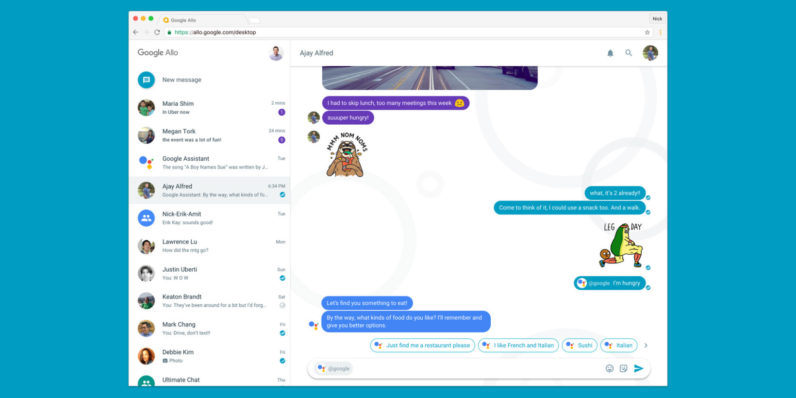 Google’s VP of communications products Nick Fox took to Twitter to share a screenshot of an upcoming browser-based version of the company’s AI-powered Allo messaging app, which you can see above.

Fox didn’t specify a release date for the desktop version or whether Allo would continue to be tied to a single device, as is the case with WhatsApp. But I wonder if maybe this is when Google should begin thinking about streamlining its suite of communication tools.

Right now, Google offers Hangouts, Voice, Allo, Duo, Phone and the freshly rebranded Android Messages. Is there really any need for two separate Web- and mobile-based messaging services? And why not simply fold Duo’s video calling capabilities into Phone, given that both apps rely contacts’ numbers to reach them?

Of all the major mobile messaging apps like Facebook’s Messenger, WhatsApp, Line and WeChat, Hangouts is perhaps the weakest offering you can find right now, owing to its lack of features. I find no reason to continue to use it except for the fact that a single friend in Sweden can chat with me on it from his locked-down workplace computer.

Hangouts handily merged SMS and IM conversations into one chat per contact, but even that functionality was stripped out last year. I’d consider using it again if it brought something new to the table, like the intelligent Assistant in Allo.

According to Google Play, anywhere between 10 million and 50 million people have downloaded Allo, while Hangouts has clocked over 1 billion downloads. There may be some sense in testing Assistant and other Allo-specific features in a separate app for a while, but ultimately, folding them into the more popular Hangouts seems like a no-brainer.

For me, the major issue with Allo is that no one else I know uses it. Bringing it to the desktop likely won’t do much to change that, especially if it’s still tied to a single mobile device. If Google wants a larger piece of the personal communication pie, it’ll have to boost adoption of its services – and it seems like consolidating its haphazard range of products would be a good first step in that direction.