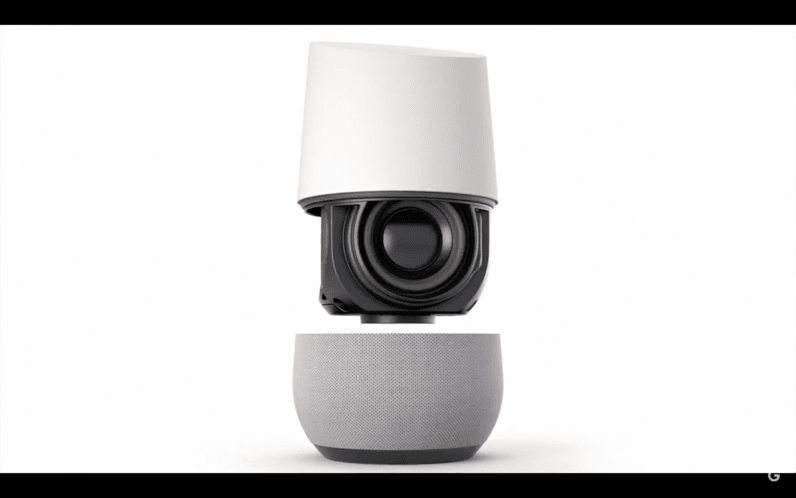 Google announced Google Home –  its take on the Amazon Echo concept – back at I/O in May, but we’ve pretty much heard nothing about the device since. Now we’re finally getting some more details.

As a recap, Home is powered by Google’s new Assistant AI, which is an improved, more personalized version of Google’s voice features. Aside from the basics like answering questions, and controlling media, Home also supports Google Cast to stream music or control your other cast-enabled devices.

There are a few controls on the device itself, using the touch-sensitive top panel for doing things like adjust volume or switching tracks. It also lights up in Google’s colors to let you know when it’s actually listening. Better yet, you can actually mute the microphone with a button in the back when you don’t want it to be listening.

Google is also touting the speakers’ sound quality, with a three speaker setup. You can also easily swap out bases to customize your Home’s look.

There’s a new feature called My Day, which basically summarizes what you might find on your Google Now cards on Android. It’s essentially a daily briefing with information like weather, traffic, calendar events, and reminders.

Home comes with support for a variety of Internet of Things devices and apps, including Nest, SmartThings, Phillips Hue, and IFTTT, with more on the way. As mentioned before, you can also control your Chromecast enabled TVs. Only YouTube is supported for video right now, but Netflix support is on the way, and you can use home to cast images from Google Photos to your TV or play music from Chomecast Audio as well.

Amazon may have beaten Google to the punch, but Google seems to be ready to put up a serious fight – especially if you’re already invested in Google’s ecosystem.

And finally, we have a price: $129, available from the Google Store, Best Buy, Walmart, and Target. The device will ship and be available in physical stores on November 4.

Google Home on Made by Google