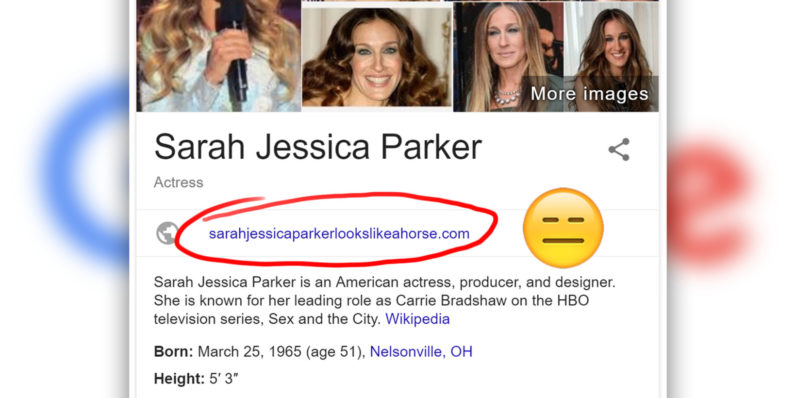 Google Knowledge Graph, for those that are unaware, provides additional information about a search term to keep you from needing to click on results to get quick bits of information. A celebrity’s age, the date of a major historical event, or which team a NBA star plays on are all great uses for knowledge graph.

Insulting celebrities, well, not so much. Yet, that’s exactly what this Google Knowledge Graph result for Sarah Jessica Parker does.

The joke, which started with a single blog about a month before the release of the ‘Sex and the City’ movie, makes the claim that Parker looks like a horse. It’s since been referenced millions of times everywhere from Reddit (where this specific discovery was made) to South Park.

Google, it seems, had an algorithm hiccup and managed to connect the joke to Parker — which is good — while also insulting her on the Knowledge Graph result for her name — not so good — by adding the link to the infamous blog that started the long-running joke.

As one Reddior put it:

While we’re certain this wasn’t intentional, someone at Google definitely has some explaining to do.

Read next: Report: Clinton staff emails were part of DNC breach (and Julian Assange may have them)