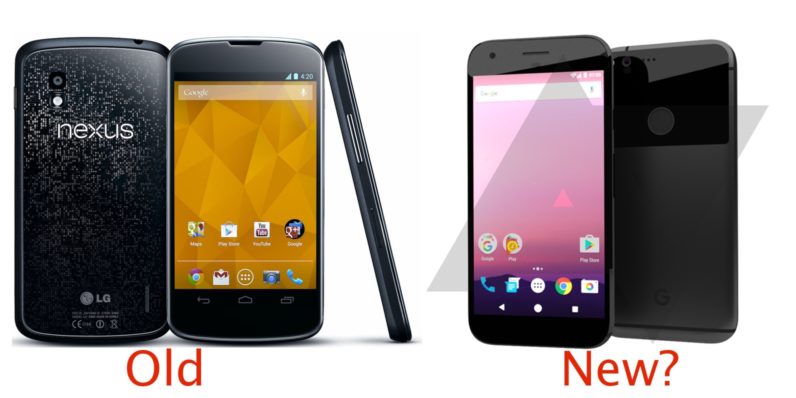 Now that Google is assuming more control of the Nexus lineup, a tipster has provided some information on what the next Android flagship will look like — and it’s really familiar.

Speaking to Android Police, this person claims they’re familiar with what Google’s thinking is regarding the design of our next Nexus. To that, Android Police says its confident in the leak, but hedges its bets by saying things could change drastically once the device arrives.

Read: it’s just a rumor — and a very word-of-mouth one at that. Still, AP made a very decent mockup of the device, which reminds us all of an old friend.

It’s believed that HTC will be building two Nexus devices for Google: one codenamed ‘Marlin’ and another going by ‘Sailfish.’ We’ll assume the latter is a poke at Jolla.

The first thing that struck us at TNW was the rear of this Nexus. It’s not metal, like most modern HTC devices. It’s not clear what the material is, but it’s either glass — like a Nexus 4 — or some sort of plastic/polycarbonate/who knows.

And while that’s not what HTC has been up to lately, it has done something similar in the past. The HTC Desire and Desire Eye are eerily similar to this mockup. As supply chain goes, HTC likely still has the chops to make this device as we’re seeing it, which may also be why it’s not metal.

The current thinking is that this mockup is not one of the devices, but both. While we’ll likely see two sizes of Nexus (Nexii?) this year, this is touted as the overall aesthetic for both.

If that’s accurate, it’s interesting to see Google moving away from variety with its flagship lineup. It spends a lot of time (and money) telling us that a big part of Android is variety, but may offer none of it with a new Nexus lineup. The non-metal design isn’t enough; LG and Samsung have both moved on from straight-up metal.

While a deprecated 5X and 6P could still see refreshed specs — and packaged as ‘alternatives’ to this design — it’s not quite what Google is best known for.

Really, it looks a lot like a Nexus 4 — and that’s boring. We’re hoping this mockup gets it mostly right, but we also hope whomever AP spoke to is only getting the water cooler talk and there’s more to this one.

Exclusive: this is what the 2016 Nexus phones, Sailfish and Marlin, will look like on Android Police

Read next: Nintendo might make dedicated controllers for its own mobile games